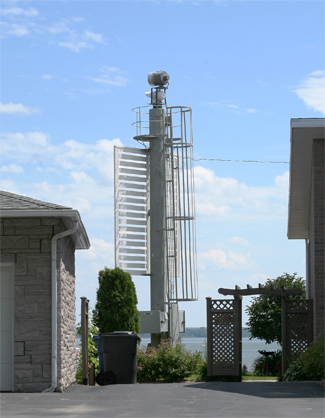 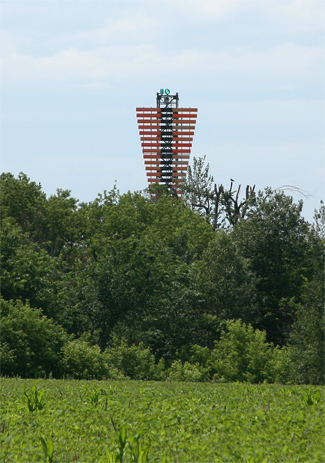 A lighthouse was first built at Champlain in 1844, and in 1870, when Napoleon Hardy was serving as its keeper, the structure was described as an octagonal, wooden, ten-foot-tall tower that displayed a fixed white light at a height of thirty feet above the river. A new lighthouse was landed at Champlain in May 1877 along with three carpenters to place it in position. This new lighthouse, a square, wooden tower with an octagonal lantern room, stood twenty feet tall, from base to vane, and displayed a fixed white light using two mammoth flat-wick lamps set in eighteen-inch reflectors.

In 1881, the salary of Keeper Hardy was increased from $100 to $130 owing to the establishment of a second light at his station. This second light was in the form of a pole light, with a shed at its base to house the necessary apparatus for hoisting the light to the top of the pole. When Napoleon Hardy died in 1889, Lucien Hardy was placed in charge of the main or front light and Miss Valérie Martineau was made keeper of the rear pole light.

A second set of range lights was established at Champlain in 1904, when two day beacons, which marked the channel from Citrouille Point, near the mouth of the Champlain River, to the Village of Champlain, were adapted for night navigation by hoisting a lantern up each of them. This new range was known as Champlain Upper Range, while the old range was renamed Champlain Lower Range. In 1905, a square, thirty-foot-tall, wooden tower, with sloping sides and surmounted by a square wooden lantern room, took the place of the front day beacon, while a square, skeletal, ninety-five-foot-tall, steel tower replaced the rear day beacon. The rear tower was topped by an enclosed lantern room and had white wooden slatwork on its range-facing side to enhance its visibility during the day. A second pair of keepers was hired to look after the Upper Range.

Champlain Lower Range received new towers one year after Champlain Upper Range as described in the following excerpt from the Annual Report of the Department of Marine and Fisheries:

The new front tower stands near the bank of the river, 158 feet N. 74 ½ ° E. from the old front tower, and about 1/8 mile above the village church. It is a square wooden building, surmounted by an octagonal wooden lantern, the whole painted white, and is 23 feet high from its base to the top of the ventilator on the lantern. The light is a fixed white catoptric light, elevated 34 feet above the summer level of the river, and visible four miles in the line of range.

The back tower stands 2,020 feet N. 56° E. from the front tower. It consists of an open steel framework, square in plan, with sloping sides, painted brown, surmounted by an inclosed wooden watchroom and a square wooden lantern. The upper portion of the framework facing the channel is covered with wooden slat work to render it more conspicuous as a day beacon. The lantern roof is painted red, the remainder of the lantern, the watchroom and the slats, are painted white. The tower is 92 feet high from its base to the top of the ventilator on the lantern. The light is a fixed white catoptric light, elevated 104 feet above the summer level of the river, and visible four miles in the line of range.

The steel tower for the back range was furnished by the government shipyards at Sorel, at a cost of $600, and the total cost of labour and material in erecting this range, exclusive of steel tower, was $890.47.

In 1927, the back light of Champlain Lower Range had to be rebuilt after the former structure was struck by lightning and burned. A decade later, in 1937, the lower front tower, a wooden tower topped by an octagonal lantern room, was replaced by a lantern atop a slatwork tower with a shed at its base.

Champlain Upper Range is now known as just Champlain Range, while the light at the site formerly occupied by the front light of Champlain Lower Range is known just as Champlain.

For a larger map of Champlain Upper Range Lighthouse, click the lighthouse in the above map.

The range lights are owned by the Canadian Coast Guard. Grounds/tower closed.