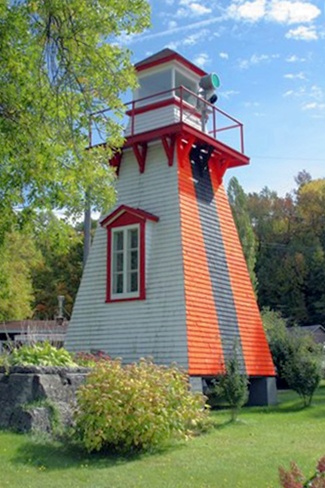 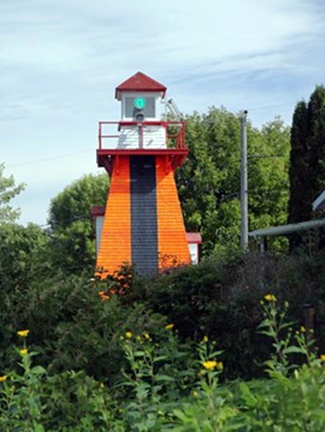 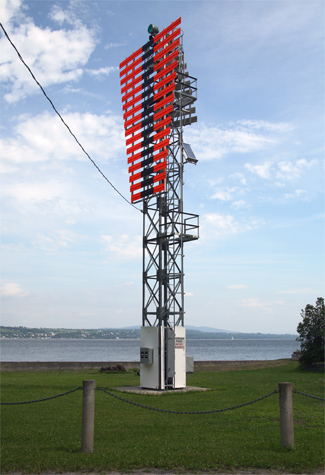 Located on the southern shore of the St. Lawrence River, twenty kilometres west of Quebec City, Saint-Antoine-de-Tilly is noted as one of Quebecs most beautiful villages due to its historic stone church, wooden period houses with colorful flower gardens, and its roadside crosses known as Calvary.

A twenty-seven-foot-tall, square, wooden tower, painted white, was erected on a bluff at St. Antoine in 1858 and equipped with two lamps and reflectors to guide mariners along this stretch of the St. Lawrence. An acre of land for the lighthouse along with a right-of-way was purchased from Francois Xavier Bergeron of the parish of St. Giles on December 26, 1854. Leon Lafleur was keeper of the light for over thirty years in the 1800s, and he saw his annual salary for keeping the light rise from $140 to $185.

The towers light was exhibited at a height of ninety-six feet above the river, and its lamps consumed roughly sixty gallons of oil each year. Porpoise and seal oil were being used in 1861, but the plan was to use coal oil starting in 1862.

In January 1877, William Barbour, the engineer for the Department of Marine in Quebec, visited St. Antoine Lighthouse and reported that its twenty-three-year-old lantern leaked from the top. The previous season, two additional lamps were installed in the lantern room, bringing the total to four, but Barbour felt the lantern room too small for four lamps. Barbour recommended a new wooden lantern room be installed, and the following month, three carpenters were dispatched to St. Antoine to place a new lantern room on the existing tower.

The following extract from the Annual Report of the Department of Marine for 1901 details the measures taken to improve the light:

The light at Point St. Antoine was again raised 12 feet, to enable it to show over the trees down stream, but pilots keep complaining of its unsatisfactory nature.

To remedy difficulties encountered in this neighbourhood, the construction of three new lighthouses has been undertaken; two of them ranging down stream, to lead past the position of the Trembles shoal gas buoy, and one of these, with the third building, ranging up channel, leading clear of Pouiller Paget. These three new lighthouses will be ready for the opening of navigation next spring, and when they are put in operation the old light at St. Antoine point could be discontinued.

At the opening of navigation in 1902, the three new lights were placed in operation, and the old double light, which stood on the point above St. Antoine, was discontinued. The Department of Marine published the following description of the new towers:

St. Antoine de Tilly  On May 1, 1902, three range lights were established at this place

The front light of the upstream range is fixed white catoptric, elevated 36 feet above high water mark and is visible 6 miles in, and over a small arc on each side of the line of range.

The lighthouse is a square, wooden tower, with sloping sides, surmounted by a square wooden lantern, painted white, with the lantern roof red. Its height from the base to the vane on the lantern is 30 feet. The tower stands just above high water mark on the west side of the low flat part of St. Antoine point and is distant 2640 feet N. 56° W. from St. Antoine village church.

The back light of the upstream range, which is also the front light of the downstream range (indicating the traverse at the foot of Trembles shoal), is fixed white dioptric, elevated 68 feet above high water mark, and visible 9 miles from all points of approach by water.

The lighthouse tower is a square building with sloping sides, consisting of an open steel framework painted brown, surmounted by a wooden lightroom painted white and topped with a square wooden lantern painted red. The height of the tower from its base to the vane on the lantern is 65 feet.

The back light of the downstream range is fixed white catoptric, elevated 203 feet above high water mark, and visible 16 miles from all points of approach by water.

The tower is exactly the same as that of the front light of the downstream range, and stands on the crest of the hill behind the point, distant 825 feet S. 65° W. from the upstream range back light.

These lighthouses were erected by days labour, under the supervision of Mr. E. Roy, at a cost of $4,159.63, which includes $1,184 paid Messrs. Gould Shapley & Muir of Brantford for two galvanized steel frames.

St. Antoine Upstream Range has also been known as St. Antoine Upper Range, and today it is officially known on the Canadian Coast Guard Light List as St. Antoine Course Range. This ranges original 1902 front tower remains in use, while its rear tower has been replaced by a square, skeletal tower displaying an exposed light.

St. Antoine Downstream Range has also been known as St. Antoine Lower Range, and today it is officially known on the Canadian Coast Guard Light List as St. Antoine Traverse Range. This ranges towers were replaced in 1993 by square, skeletal towers displaying an exposed light.

For a larger map of Saint-Antoine Course Range Lighthouse, click the lighthouse in the above map.

From QC-132 in Saint-Antoine-de-Tilly, turn north onto Chemin de Tilly and then go north on Rue des Phares. Continue to the roundabout and then take Place des Phares that runs along the river and you will see Saint-Antoine Course Range Front Lighthouse on your right. Please note that the area west of the roundabout is a private community, so the best way to get a view of the lighthouse is from the river. The less interesting rear range light is located right at the roundabout.

The range lights are owned by the Canadian Coast Guard. Grounds/tower closed.


If you are looking for a place to stay in the area, Auberge Le Marquis des Phares is located right by the tower that doubles as a front and rear range light.