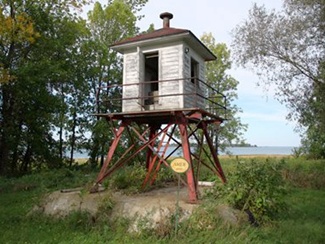 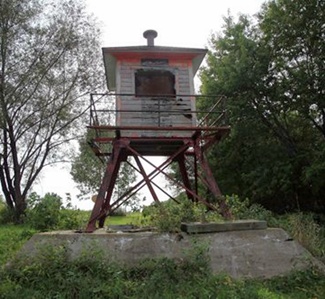 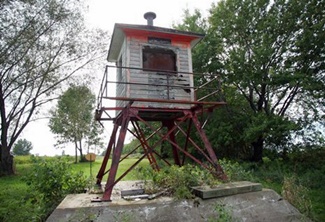 A string of islands, with narrow winding channels separating the various islands, lies in the middle of the St. Lawrence River between Saint-Sulpice on the north shore and Verchères on the south shore. Île Bouchard is the largest island in the chain, and others include Île Ronde, Île Dansereau, Île Marie, and Île Beauregard. Île Ronde is also known as the Bouchard Peninsula, and in 1913 range lights were erected on the islands north shore. Just before the range was activated at the opening of navigation in 1914, the following description of the lights was published in a Notice to Mariners:

Front Light.  A fixed white catoptric light of 900 candlepower, visible 6 miles in the line of range, exhibited 23 feet above the summer level of the river from a triangular skeleton steel tower 19 feet high, with square slatwork on the upper portion of the side facing the alignment and a shed at the base, tower red, slats and shed white, erected on a square concrete pier 4 feet high, on the northern side of Ile Bouchard 190 feet back from low-water mark and 4,240 feet 151° 15 from St. Sulpice Church.

Rear light.  A Fixed white catoptric light of 2,500 candlepower, visible 7 miles in the line of range, exhibited 70 feet above the summer level of the river from a skeleton tower 61 feet high, square in plan, with sloping sides, with the upper portion of the side facing the alignment covered with slats and surmounted by an enclosed wooden watch room and square lantern, skeleton frame red, slats and sides of watch room and lantern white, lantern roof red, erected 230 feet back from low-water mark and 2,594 feet 230° 45 from the front light.

The total cost for the range lights came to $2,295,18, with $523.92 being paid to the Goold, Shapley & Muir Company of Brantford, Ontario for a standard, three-section, steel, skeletal base to serve as part of the rear range tower and $895.10 being spent on labour to erect the towers under the direction of C. Hartley. The two plots of land for the towers were purchased from A. Beaudoin and G.E. Faribault for $92.50.

The range lights served to guide vessels between Mousseau Range, located just downstream on Île Bouchard, and St. Sulpice Traverse Range, located just upstream on the mainland. Both of these other ranges were also activated in 1914 to guide mariners along the Repentigny Channel that ran on the north side of the river between Lavaltrie and Repentigny. A different series of range lights served to guide mariners along the channel south of the string of islands located between Saint-Sulpice and Verchères.

Auguste Beaudoin, who likely sold one of the parcels of land for the towers to the government, served as the first keeper of the range lights until his death in 1918, whereupon his family was given the standard gratuity of two months salary. Lucidas Beaudoin was then placed in charge of the range.

At some point after 1959, the front tower was replaced by a new one with an enclosed lantern room. Bouchard Peninsula Range Lights were deactivated in 1996.

For a larger map of Bouchard Peninsula (Île Ronde) Range Front Lighthouse, click the lighthouse in the above map.

Île Ronde Front Range Light is best viewed from the island. Lordship of Round Island offers accommodations, a marina, and cruises.