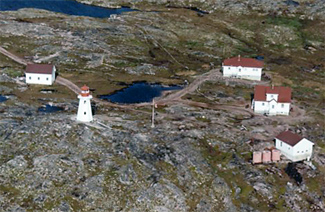 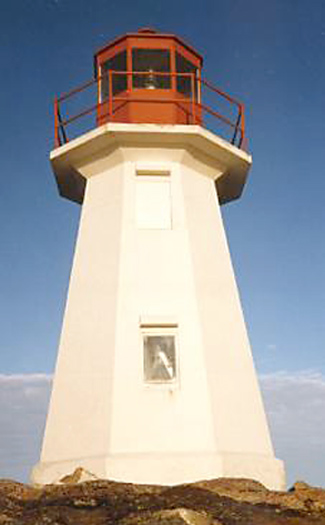 Camp Islands are a collection of granite islets and rocks in Niger Sound, located on the Labrador coast seven miles south of Battle Harbour.

A light, displayed atop a square, wooden structure with sloping sides, was first established on Outer Small Island in 1932. In addition to the light, which flashed every four seconds, a fog alarm building was also constructed on the island, and Alexander Vivian, for whom a keeper's dwelling was provided, was in charge of them both.

In 1960, a new fog alarm building was built on a larger island, northwest of the old station, which was accessed by a cable bridge. Twillingate Engineering and Construction Ltd. was contracted to erect a dwelling, a reinforced concrete lighthouse, a winch house, and access road, and two storage sheds near the new fog alarm. The octagonal, concrete tower stands thirty-two feet tall. A second keeper's dwelling was added later.

On July 23, 1967, the World Mermaid, a Liberian vessel, and the Giacinto Motta, an Italian vessel, collided off Camp Islands in dense fog. The cause of the accident was "negligent navigation" by both vessels. The Giacinto Motta sank, taking down a load of cargo valued at over two million dollars, but not before the crew and three passengers were able to escape in lifeboats. Eight hours after the mishap, the survivors arrived at Camp Islands, where they were assisted by Keeper Lancelot Bartlett and his assistant. The Italian Government later commended the keepers for assisting in the rescue.

Robert and Gladys Beals packed up their belongings and their four-year-old son Ivey in 1980 and moved to Camp Islands, where Robert had accepted an assignment to serve as keeper for eight years. Shortly after arriving on the island, the Beals spotted their son sitting atop a towering cliff with his feet dangling over the side. Gladys couldn't watch as Robert sneaked up and snatched Ivey up. Over the next three days, Gladys alternately praised Robert for rescuing her son and cursed him for accepting the position as lightkeeper.

On New Year's Day in 1982, Ivey contracted a severe case of red measles from a visiting fishermen. Using her trusty The 101 Home Remedies Guide, Gladys was able to moderate Ivey's fever for two days until a storm, which had been raking the island, abated. Ivey was taken by boat to the mainland and then had to endure an eighty-seven-kilometre snowmobile ride to reach the nearest hospital, where a doctor told Gladys that her son might not have survived one more night without medical attention. After Ivey's second brush with death, Gladys made Robert promise that they would be leaving the island after their commitment was up.

Camp Islands Light Station was automated in 1996 and de-staffed the following year.

For a larger map of Camp Islands Lighthouse, click the lighthouse in the above map.

Camp Islands Lighthouse is accessible only by boat or from the air.