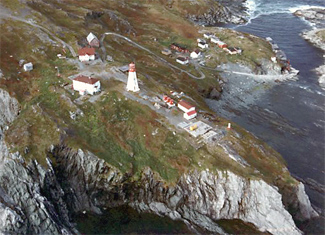 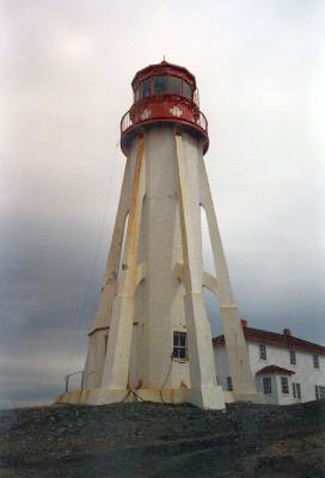 As most of the vessels transiting the Strait of Belle Isle were bound to or from the St. Lawrence River, it was the Province of Canada and later the Dominion of Canada that was interested in marking this passage. Belle Isle is situated at the eastern entrance to the strait, and the Province of Canada established a lighthouse on the islands southwest end in 1858 to mark the strait. Canada also established lights at Point Amour (1857), Pointe Riche (1871), Cape Norman (1871), Cape Bauld (1884), Flowers Cove (1894), and New Ferolle (1913), before William P. Anderson, Chief Engineer of the Department of Marine, surveyed a site on the northeast end of Belle Isle in 1901 for the eighth and final major lighthouse to mark the Strait of Belle Isle.

A lengthy description of the newly constructed Belle Isle North End Lighthouse was provided in the 1905 Annual Report of the Department of Marine.

A lighthouse was erected on the northeast point of Belle Isle, and put in operation on the opening of navigation in 1905.

The lighthouse stands on land 90 feet above high water mark and 210 feet back from the water's edge. It is a cylindrical iron tower, surmounted by a polygonal iron lantern, the whole painted red. It is 55 feet high from its base to the ventilator on the lantern.

The light is a white light, giving one bright flash of ½ second duration every 11 seconds; it is elevated 137 feet above high water mark, and visible 17 miles from all points of approach by water. The illuminating apparatus is dioptric of the second order, and the illuminant will be petroleum vapour burned under an incandescent mantle.

A new fog alarm is in course of construction at this station. This work is being carried out by days' labour, under the foremanship of Mr. Audibert, and the amount expended since the commencement of the present fiscal year is $13.208.94.

In 1906, work continued on a two-storey wooden dwelling with a gabled roof and dormer windows, situated just inland from the tower, and a wooden fog alarm building, located at the edge of the cliff on the north-east extremity of the island, 200 feet northeast of the tower. The rectangular fog alarm building was painted red and housed a diaphone, operated with air compressed by an oil engine, that gave one blast of 3 ½ seconds' duration every minute in foggy weather.

The Fresnel lens was supplied by Chance Bros. & Co., of Birmingham, England, while the Canadian Fog Signal Company of Toronto provided the fog alarm machinery. Paul Thomas was appointed first keeper of the light and fog alarm at an annual salary of $1,100.

In 1908, after roughly three years of operation, the rather slender tower was encased in reinforced concrete, with six flying buttresses providing extra stability. The concrete tower was painted white soon after it was finished.

Adjacent to the light station is a small sheltered landing area known as Black Joke Cove, where a derrick was used to lift supplies ashore.

The original keeper's house was replaced in the 1950s by a double dwelling and a single dwelling. Cecil Wellman, who served from 1957 to 1964 as one of the last head keepers of the light, was killed in an accident on Belle Isle in 1964. The light had been electrified by 1966, and an electronic fog horn was installed in 1972.

Three keepers were stationed at Belle Isle North End in the early years, but after electricity arrived, one of the keeper positions was eliminated. The station was de-staffed sometime before 2005.

The lighthouse was declared a Recognized Federal Heritage Building in 1989. The station's light currently produces a white flash every ten seconds, and the fog alarm sounds a three-second blast in every thirty seconds when needed.

For a larger map of Belle Isle North End Lighthouse, click the lighthouse in the above map.

Belle Island North End Lighthouse is best seen by boat or from the air in good weather. The lighthouse is 35 km (22 miles) from Battle Harbour and 43 km (26.7 miles) from Quirpon Island.