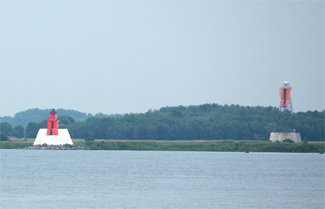 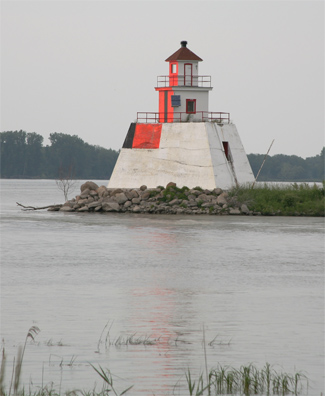 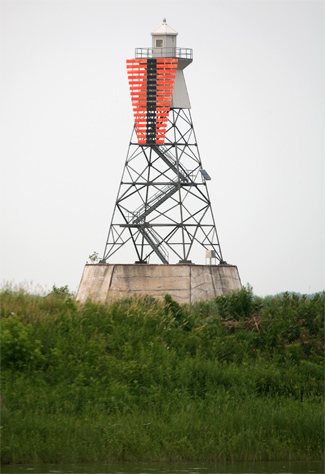 The St. Lawrence River broadens in a few areas along its course to form lakes. Just upstream from Montreal are found Lake Saint-Louis and Lake Saint-Francis, and just downstream from Sorel-Tracy is Lake Saint-Peter. In the western end of Lake Saint-Peter, just offshore from Sorel-Tracy, is found a collection of 103 islands known as the Archipelago of Saint-Peter. In 1906 and 1907, multiple ranges were established to guide mariners through the archipelago, including lights at Gallia Bay, Île des Barques, Île du Moine, Sainte-Anne-de-Sorel, Île de Grâce, and Île Dupas. The range lights on Île du Moine were placed in operation on August 23, 1906 to direct mariners between the channels marked by Île de Grâce Range and Sainte-Anne-de-Sorel Range. The Île du Moine rear range tower was somewhat unique as it displayed the rear lights for both the Île du Moine Range and the Île des Barques Range.

The Department of Marine published the following description of Île du Moine Range in 1906:

The work was performed by day labour under the Montreal agency; the steel tower was supplied by the government shipyard at Sorel, and the total cost of this work, inclusive of the tower, was $17,022.13.

At some point between 1955 and 1994, the rear tower was replaced by the current fifty-seven-foot-tall, square, skeletal tower that displays a light at a focal plane of ninety feet above the river. During this same period, the characteristic of the range lights was changed from fixed white to fixed green.

For a larger map of Île du Moine Range Lighthouse, click the lighthouse in the above map.

From the terminus of Autoroute 30, turn left onto Boulevard Poliquin (Chemin du Chenal du Moine) and continue for 8 km (5 miles) and then turn toward the river on Rue La Chappelle. You can get a good view of the range lights from the end of the road.