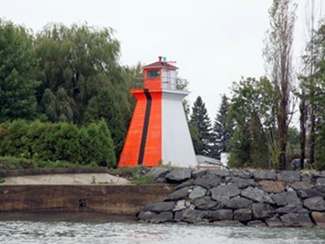 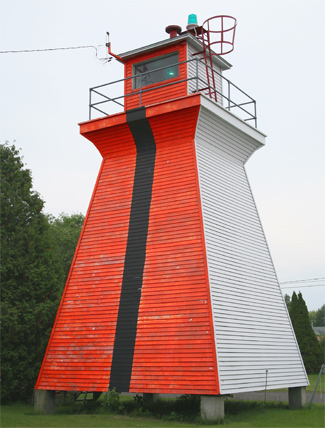 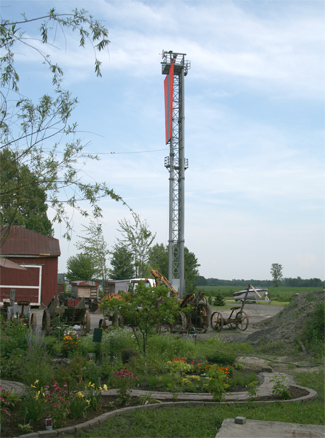 The following description of Sainte-Anne-de-Sorel Range was published shortly after the lights were established:

The front lighthouse, a square white building surmounted by a square red lantern, all 19 feet high, stands on a concrete pier, on the southern shore of the St. Lawrence, about 2 ¼ miles below Sorel, and exhibits, at 35 feet above high water, a fixed white light, visible, in the line of range 2 miles.

The rear lighthouse, a brown square steel skeleton tower, with white wooden slat work on upper portion of side facing channel, white inclosed watch room, and lantern roof red, the whole being 80 feet high, stands 723 yards, 235°, from the front lighthouse and exhibits at 98 feet above high water, a fixed white light, visible, in the line of range 5 miles.

Frs. Lanicault was hired as the first keeper of the front range light at an annual salary of $100, while Pierre Counoyer received the same amount for tending the rear light.

For a larger map of Sainte-Anne-de-Sorel Range Lighthouse, click the lighthouse in the above map.

From the northern terminus of Autoroute 30, turn left onto Boulevard Poliquin. After 2.2 km (1.4 miles), Boulevard Poliquin will become Chemin du Chenal du Moine. Continue for 2.3 km (1.4 miles) more, and you will see Sainte-Anne-de-Sorel Range Rear Lighthouse on your right some distance from the road. You can photograph the rear light from the parking lot of a nearby church. To find the front range light, continue east on Chemin du Chenal du Moine for 0.8 km (0.5 miles) and then turn left onto the road after Rue Dupont. The light is at the end of this road, but the best way to see the light is from a boat on the river.