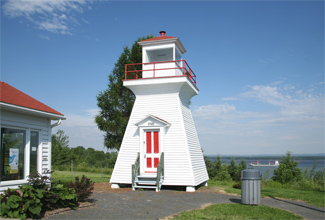 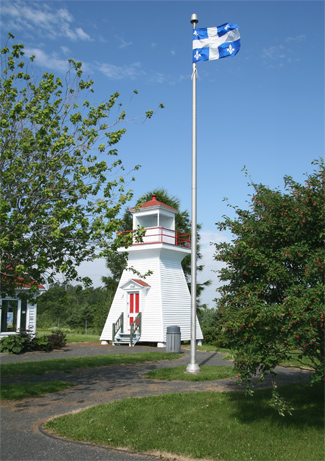 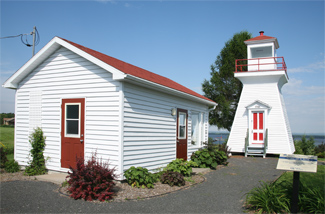 Cape Charles is located just a few kilometres east of Deschaillons-sur-Saint-Laurent, and two towers were erected on the cape in 1856 to help guide mariners along this section of the Saint Lawrence River. The two twenty-foot-tall wooden towers were spaced roughly eighty yards apart and displayed their lights at a height of about 110 feet above the river to guide mariners past Cap à la Roche.

Fr. Boisvert was hired as the first keeper of the range lights, and he spent over twenty years at the station. Besides his salary as keeper, Boisvert was also paid an annual rent of $10 for the use of the land on which the lighthouses stood.

Owing to the decrepit condition of the back tower, which made it dangerous to life to attend the lamps, a pole light was erected on September 25, 1890 to display the rear range light. In 1895, a pole that was ten feet taller than its predecessor was erected for the rear light, and a locomotive headlight lantern was sent from the stores of the Department of Marine in Quebec to replace the one formerly used. The small building at the base of the pole was also enlarged at this time.

When the dredging of the twenty-seven-and-a-half-foot shipping channel across Poulier Dos de Cheval (Horseback Bar) was completed, a day beacon was erected 1,274 feet southwest of the Cape Charles Front Light in 1894 to mark the channels centre line. This diamond-shaped day beacon, which was ten feet square and painted black with a white centre, rose forty-five feet above the ground and 156 feet above the shipping channel. Deep-draft vessels headed upstream were advised to align an elm tree in Upper Lotbiniere with the spires of Lotbiniere church until they brought Cape Charles Front Light in one with the day beacon, which alignment would lead them safely over Horseback Bar.

The day beacon was only a temporary measure, and in 1901, it was replaced by a tower as described in the following excerpt from the Annual Report of the Department of Marine:

Cape Charles  The day beacon at this point, which in one with the front range lighthouse marks the axis of the ship channel through Batture Des de Cheval (Horseback bar) was taken down and replaced by a lighthouse tower.

The tower is square in plan with sloping sides, and consists of a skeleton steel frame surmounted by an inclosed wooden watchroom, and a square wooden lantern.

The steel frame is painted red, and the woodwork white. The building is sixty one feet high from the ground to the vane on the lantern.

The tower stands on the ground formerly occupied by the day beacon at the top of the steep cape, 1,250 feet from the front range lighthouse.

The light is a fixed white catoptric light, elevated 145 feet above high water mark, which should be visible eighteen miles in and over a small arc on each side of the line of range.

The new light was put in operation for the first time August 1, 1901. This light in one with the front light of the old range, leads through the axis of the dredged ship channel from below black can buoy No. 73 Q, to the intersection of the alignment of these two lights with the alignment of the Ste. Emelie range lights.

The three lights at Cape Charles will be known as the front light, the lower back light, and this new light as the upper back light, respectively.

The steel work was provided by the Goold, Shapley & Muir Company, of Brantford, Ont., whose contract price was $581. It was erected, and the building completed, under the supervision of Mr. E. Roy, foreman of works for the agency, at a cost of $466.22.

In 1907, the lower back light, exhibited from the pole, was discontinued.

A twenty-nine-foot-tall, square, wooden, pyramidal tower was erected in 1915 along with a sixty-four-foot-tall, steel, skeletal tower, surmounted by an enclosed watch room and lantern room, to house, respectively, the front and rear lights at Cape Charles. These new towers were placed just west of Cape Charles but served to mark the same downstream alignment along a bearing of 235° as the previous towers. The towers were spaced 900 yards apart, and the front light had a focal plane of 132 feet above the river, while the rear light was exhibited at a height of 181 feet above the river.

Today, square skeleton towers are used to support the lights of Cape Charles Range, which is now known on the official Canadian Coast Guard Light Lists as Calvaire Range. The 1915 rear tower was replaced in 1994, and the 1915 front tower was replaced in the 1980s by a skeletal, steel, pyramidal tower, which in turn was replaced by a square, skeletal tower.

The square, wooden tower that exhibited the front range light starting in 1915 was relocated by the municipal council of Deschaillons in the 1980s, when Charles Hébert was serving as mayor. The new site for the retired lighthouse is a rest area overlooking the St. Lawrence River at the western entrance to the village. In 2013, $35,000 was spent on a complete renovation of the tower as rotten boards were allowing water to penetrate the structure. The effort was especially meaningful for the village since the lighthouse appears on the municipalitys emblem.

Located at a rest area alongside Highway 132 on the west side of Deschaillons-sur-St. Laurent overlooking the St. Lawrence River.
Latitude: 46.54813, Longitude: -72.13218

For a larger map of Calvaire (Cap Charles) Front Range Lighthouse, click the lighthouse in the above map.

From the intersection of QC-132 and QC-265 in Deschaillons-sur-St. Laurent, proceed west on QC-132 for 2 km (1.3 miles) and you will find a rest area with Deschaillons Lighthouse, just beyond Camping Cap à la Roche.