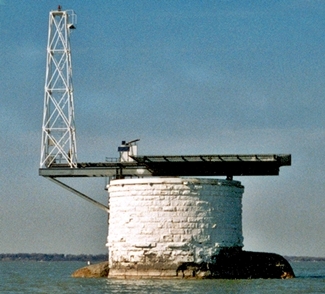 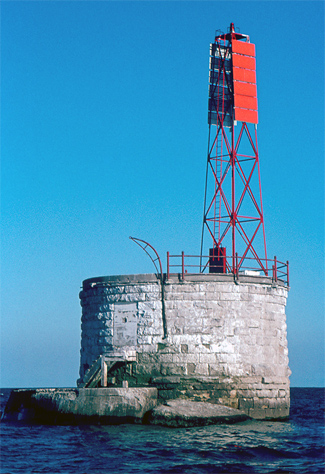 Colchester Reef is situated near the western end of Lake Erie, roughly six kilometres off Colchester, Ontario, and was the site of several vessel strandings in the 1800s. The first attempt to mark this navigational hazard was in the form of a lightship, which was serving there by at least 1848, for in July of that year the Hackett brothers of Amherstburg laid a keel for a new lightship to replace a vessel serving in that capacity on Colchester Reef. The Department of Marine noted the following on the Colchester Reef Lightship in its annual report for 1869:

A light ship has been maintained during the last three years, at Colchester Reef, Lake Erie, a few miles from the Canadian shore, near the County of Essex, by the Messrs. Hackett, of Amherstburgh, who have depended for their remuneration on private subscriptions from owners and masters of vessels and underwriters associations, but as they state, they cannot collect enough for the support of the vessel, they have applied to the Government to assist them and contribute towards the maintenance of the vessel. If this cannot be done, they state that she must be withdrawn. No subsidy has been paid to them as yet by the Government of Canada.

In 1871, Parliament finally agreed to pay an annual subsidy of $500 to those maintaining the lightship, as it was found to be a very useful and important light to the shipping on Lake Erie. This subsidy was increased to $700 by 1876, and then in 1880, Parliament appropriated $5,000 towards erecting a lighthouse atop a pier on Colchester Reef. Tenders for the lighthouse were invited, and seventeen were received, ranging from $15,500 to $37,555. James Moore of Leamington, one of two who bid $15,500, was offered the contract, but he declined, and it was awarded instead to Frederick T. Thomas, a civil engineer from Ottawa. Thomas entered into bonds for the work, but then with the consent of the Department of Marine, the work was transferred to George Wilson.

Wilson made considerable progress during the 1883 season, but then suffered a serious setback in August when a storm destroyed the iron caisson for the foundation before it could be properly secured at the reef. Wilson subsequently abandoned the work, and a contract for $17,465 was awarded to John E. Askwith of New Edinburgh to complete the lighthouse.

While some predicted that ice would soon break it off like a pipe stem, a new caisson for the lighthouse was towed out into Lake Erie from Amherstburg in late July 1885. In reporting the pending launch of the caisson, the Free Press noted: A photograph of the caisson has been taken, so that if it does go to pieces, as did the last one, there will be something left to remember it by.

The following description of the lighthouse, which commenced operation on November 3, 1885, was published by the Department of Marine:

A fixed white dioptric light of the third order, on Colchester Reef, Lake Erie, elevated 72 feet above the level of the lake, and visible 14 miles all around the horizon. The structure, consisting of a circular stone pier, standing 20 feet out of the lake, surmounted by a hexagonal wooden tower painted white, is placed near the south-eastern edge of the reef, in 13 feet water, with 19 feet water within 1,000 feet of it on every side. The contractor for this work, Mr. John E. Askwith, has carried it out to satisfactory completion, in the face of many difficulties. The light-ship, which has been maintained for some years past on the reef has been withdrawn, the establishment of the new light having rendered it no longer necessary.

While difficulties were being encountered with the construction of the lighthouse, the lightship was also having issues of its own. In the late fall of 1880, the owners of the lightship telegraphed the Minister of Marine asking for permission to withdraw the vessel but were to keep it on station. The lightship was subsequently driven from her station, cut in two by ice floes, and sank to the bottom, but not before its crew was rescued by a passing steamer. After the loss of this lightship, George Campbell of Windsor was paid $1,440 to maintain a light vessel on the reef during the 1881 season. Sixty-two-year-old Captain Alfred Forrest was in charge of Campbells lightship when it foundered and went to pieces during a gale on November 14, 1883, drowning Captain Forrest and another man.

Christopher Robson was hired as the first keeper of Colchester Reef Lighthouse, but he was replaced after roughly six months by John Manson, who spent twenty-six seasons at the remote station. Upon the retirement of seventy-year-old Keeper Manson in 1911 on account of failing eyesight, the Lake Carriers Association took the occasion to honor him with the following words:

Every mariner on the lakes knows Captain Manson. His lighthouse was the first to open in the spring, and the last to close in the fall, and many thrilling adventures have been experienced by him in getting ashore after keeping his light in commission after others had been extinguished, as well as during the navigation season.

On one occasion, now almost twenty years ago, Captain Manson had left his post to go to the village of Colchester for supplies, and as the day drew to a close he set out in his small boat to return to the lighthouse. It was autumn, and during Captain Mansons visit on shore the breeze had freshened into a gale. There was no one at the lighthouse and he knew that he must cover the several miles of stormy water before night. The little boat was tossed about on the waves, and the journey was slow. Many times the wind threatened to overturn his craft. At last he reached a point less than two miles from the lighthouse when suddenly the gale increased in fury. The angry waves soon swamped the small boat, but Captain Manson struck out to swim the remaining distance to the lighthouse. He succeeded, though the waters were icy cold, and that night as usual the beams of Colchester light warned vessels not to approach the dangerous reef.

On another occasion the boat carrying himself, his wife and two babies was overturned but Captain Alanson saved them all, pulling his wife ashore while she clung to a babe in each arm.

Captain Manson was born in Scotland, coming to Canada when but a child. He became a sailor when very young, but ceased navigating to become mate of the old Canadian lightship Dunscomb, which was stationed at Bar Point many years. When that lightship was moved in 1885, he was given charge of the Colchester Reef Lighthouse, which charge he faithfully kept until the day of his retirement.

Our Association fully recognize the loyalty and faithfulness of his long service to the marine interests which he served so long and well, and our members voice the wish that the balance of his life may have just clouds enough to make a glorious sunset.

A fog bell, tolled every fifteen seconds at a height of fifty-five feet above the lake from a belfry on the south side of the tower, was added to Colchester Reef in 1886. During the 1890 and 1891 season, twelve crib-work piers were placed around the lighthouses stone foundation to provide a large base for receiving the shove of ice and shock of waves. The cost of this work, which was supervised by W.H. Noble, foreman of works for the Department of Marine, was $9,560.42. A substantial steel and concrete protection replaced the crib-work piers in 1905, the same year that a steel bell tower replaced the stations wooden one.

Fred Malott transferred from Pelee Passage Lighthouse to take charge of Colchester Reef Lighthouse upon Mansons retirement, and Malott looked after the light until 1916, when John Knapp began his lengthy service at the lighthouse. In December 1933, Keeper Knapp and S. Bock, his assistant, were marooned at the lighthouse after closing the station for the season due to ice that was too thin to support a man and too thick to permit approaching the lighthouse by boat. Being stranded at the station was not an uncommon experience during the previous seventeen years Knapp spent at the lighthouse, and he was prepared with plenty of provisions for the prolonged stay.

Colchester Reef Lighthouse was automated in 1936, at which time its bell was discontinued and its characteristic was changed from fixed white to flashing white. In 1954, a red, skeletal tower with a white oval daymark replaced the historic wooden lighthouse. The picture of the red tower shown on this page was taken in 1976, before the tower was cantilevered off the side of the pier to make room for a helicopter landing pad.

For a larger map of Colchester Reef Lighthouse, click the lighthouse in the above map.