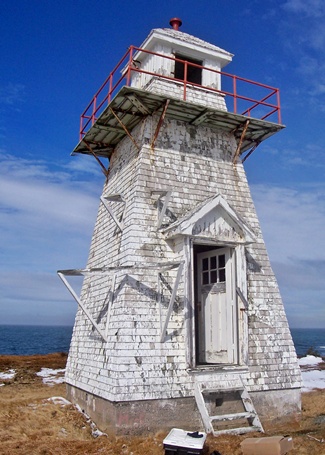 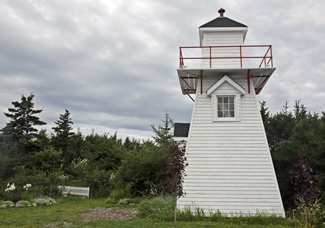 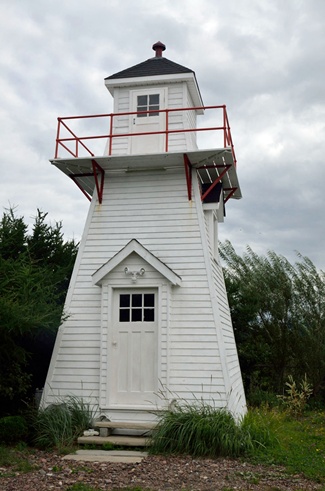 Port au Port Peninsula is triangular-shaped and located on the west coast of Newfoundland, near Stephenville. The eastern point of this triangular peninsula attaches to the Newfoundland mainland as an isthmus at Port au Port, while its westernmost point is Cape St. George, the northern limit of St. Georges Bay. The coast between Long Point, the northern point of the triangle, and Port au Port forms Port au Port Bay. Port au Port Peninsula was part of the French Shore from 1783 until 1904, when France relinquished its fishing rights in the area. The French were only allowed to establish seasonal fishing premises on the French Shore, but some fishermen did set up permanent settlements. The peninsula has the highest percentage of French-speaking citizens in Newfoundland (15%), and in 1971 it was designated the only bilingual district in the province.

A wooden tower was established on Long Point in 1909, and a combination fog alarm and lighthouse went in to operation on Cape St. George in 1915. An open-frame, wooden tower was built in 1918 at Broad Cove Point, on the mainland opposite Long Point, to mark the eastern side of the entrance to Port au Port Bay.

In 1955, a set of range lights was built at Broad Cove Point to replace the 1918 tower. According to a signature in the front tower date August 15, 1955, the foreman in charge of the project was Watson Bishop from Eldon/Belfast, Prince Edward Island.

The front light was displayed from a square, wooden, pyramidal tower with a height of 5.2 metres, while the rear light shone from a square aluminum tower, which stood 11.6 metres tall and had an enclosed upper portion. The towers stood 300 metres apart and exhibited fixed white lights that ran on battery power.

Henry J. Hynes was keeper at Broad Cove during this transition in 1955 and served until 1966, when his employment became contract-based.

In 2005, the Coast Guard decommissioned the Broad Cove Range Lights. Yve LeRoy of nearby Fox River Island heard of the planned removal of the towers, and asked for and received authorization to use the top portion of the front tower to cover a water well on his property. The foreman in charge of removing the towers asked LeRoy if he was sure he didn't want the entire tower, and after first saying no, LeRoy agreed to take the entire tower and restore it.

The front tower was cut into about a few sections and airlifted by helicopter to Fox Island River, seven kilometres south of Broad Cove Point, in March 2005. The concrete slab on which the front tower stood was broken up and removed as well. After moving the pieces to his property, LeRoy completely restored the tower and cut new siding to cover the tower. Materials from the rear tower, which was in worse condition, were used in restoring the front tower so it would be as authentic as possible. The only significant change to the lighthouse was replacing a window in the lantern room with a door to permit easy access to the gallery.

Personnel who visited the lighthouse on maintenance trips often signed the inside of the tower, and Yve LeRoy is continuing this tradition by having visitors to his restored tower sign their name, date, and hometown.

For a larger map of Broad Cove Range Front Lighthouse, click the lighthouse in the above map.

From the Trans-Canada Highway, roughly 50 km (31 miles) south of Corner Brook, take Exit 3 and travel west on Highway 460 toward Stephenville. After 33 km (20.6 miles), you will arrive in Stephenville, but continue west another 8.8 km (5.5 miles) to Port au Port. In Port au Port, turn right onto Highway 462 and continue 18 km (11.2 miles) to Fox Island River, where you will find Broad Cove Range Front Lighthouse. You are invited to knock on Yve LeRoy's front door, and, if he is home, he will gladly show you the lighthouse. If no one is home, please respect the private property and only view the tower from the main road.