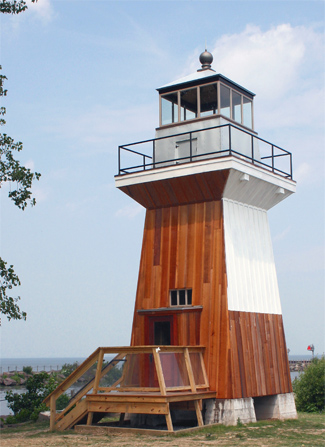 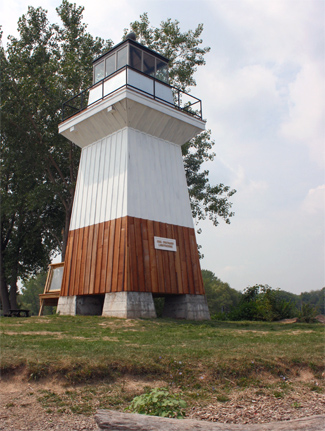 At this point the public improvements are progressing rapidly; three hundred feet of the piers, on either side, are finished, or nearly so. It is contemplated extending them to a further distance of nine hundred feet, making the total of each pier twelve hundred feet. It is presumed, when these piers are finished, that the current from the creek will clear a channel of sufficient depth, without resorting to other means. If, however, dredging should be found necessary, that can easily be accomplished, in a single season, after the piers are in proper condition.

This must become a port of vast importance for vessels in foul weather, the harbor being spacious, with a depth of from 14 to 20 feet of water for two miles up the creek.

When these piers are in a condition to admit of the structure of a beacon-light, it will be both judicious and proper to submit a plan and estimate for the same; until then, there will be no possibility of entering the harbor.

A petition from sundry inhabitants of the State of New York was presented to the U.S. House of Representatives in 1836, praying for the improvement of the harbor at the mouth of Oak Orchard Creek, and between 1836 and 1852, $30,500 was spent on constructing piers. Congress awarded $87,000 on March 2, 1867, for continuing the improvement of the harbor of Oak Orchard Creek, and it was only after this work that the beacon-light proposed roughly thirty years earlier was finally built.

On July 15, 1870, Congress appropriated $20,000 for a lighthouse at or near the mouth of Oak Orchard Creek to serve as a lake coast light between the existing lights at Fort Niagara and Genesee, and, if practicable, to mark the approach to the creek. After a careful examination of the harbor, a frame beacon placed on the west pier was deemed the proper way to mark the harbor, and one-half acre of land was purchased on the west bank of the creek at a cost of $500 for the keepers dwelling.

Sealed proposals were invited for supplying the necessary material for the dwelling and beacon, and, after contracts were made, work at the site commenced on March 30, 1871. A wooden, square, pyramidal tower, with a height of thirty-two feet, three inches, was built on the pier, while a one-story and attic frame structure, with a room especially arranged for the accommodation of the beacon supplies was built for the keeper. The fourth-order, fixed light was first exhibited on the evening of June 17, 1871, and the dwelling was finished five days later. To reach the beacon, the keeper had to walk 1,800 feet along the beach to reach the pier and then continue another roughly 1,000 feet out on the pier.

Twenty-seven-year-old John R. Kelly was hired as the first keeper of the light, and he faithfully fulfilled his duty for thirty years. Two years after the light was activated, an 800-foot-long elevated walk was built on the pier in the spring of 1873 to help Keeper Kelly reach the beacon when waves or ice made walking on the pier perilous. In 1880, the elevated walkway was repaired and extended inshore another 221 feet, but just four years later, the west pier was rebuilt and an entire new elevated walkway constructed. A well was sunk near the dwelling in 1884, and then deepened some twenty feet in November 1897. After drawing water from the well, the keeper could store it in a cellar beneath the kitchen.

A newspaper article in 1897 noted: John Kelly, who has held the position of lighthouse keeper at the Oak Orchard harbor for the past thirty years has been taken to the Willard State Hospital, having become insane from protracted illness. Keeper Kelly must have soon recovered as he remained in charge of the lighthouse until just a short time before his death in May 1901.

A square oil house was erected near the pier in 1904, and about 473 square feet of cement walks were laid. The piers that bracketed the river entrance were maintained until 1905, after which they gradually fell into disrepair. Oak Orchard Light was permanently discontinued on May 1, 1914, as there was no commerce in the area and the War Department was no longer maintaining the harbor. A powerful storm in 1914 broke through the western pier, and another tempest on December 23, 1916 swept away the lighthouse and what remained of the pier. After the light was deactivated, the keepers dwelling was rented for a few years and then sold in a sealed-bid auction at Buffalo on July 16, 1917.

Founded in 2004, the Oak Orchard Lighthouse Museum successfully raised funds, including a matching $85,000 Environmental Protection Fund grant, for building a replica of the 1871 lighthouse. Using information from the National Archives, Chatfield Engineers and Thomas Simbari of Simbari Design drew up plans for the replica. Construction bids for the project were opened in August 2009, and the lighthouse committee was shocked to find the lowest bid was nearly double what they had anticipated. After changes to the contract and rebidding, a bid of $163,984 was awarded to Nathaniel Development Corporation of Rochester, New York, who broke ground on the project in February 2010.

On June 26, 2010, a ceremony was held to officially dedicate the new Oak Orchard Lighthouse. A memorial walkway, made up of bricks sold as part of the fundraising effort, leads up to the lighthouse, and a museum building will eventually be opened on the site to interpret the maritime history of the area. A light in the lighthouse is active from April 1 to November 1 under a permit issued by the U.S. Coast Guard. The oil house from Oak Orchard can be visited on the grounds of The Cobblestone Museum, in nearby Albion.

For a larger map of Oak Orchard (Replica) Lighthouse, click the lighthouse in the above map.

From the Lake Ontario State Parkway roughly thirty miles west of Rochester, take the N.Y. 98 Exit for Point Breeze/Albion. At the end of the off ramp, turn north toward Lake Ontario on Point Breeze Road, drive 0.5 miles to its end, turn left onto Ontario Street and continue into the parking lot. The lighthouse is located in a grassy area north of the parking lot. The lighthouse museum is open weekends from May 1 to October 15, and visitors are able to climb to the top to see the view and the light.

The lighthouse is owned by the State of New York and maintained and operated by Oak Orchard Harbor Lighthouse Museum. Grounds open, tower open in season.