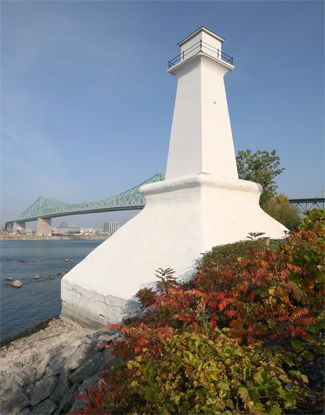 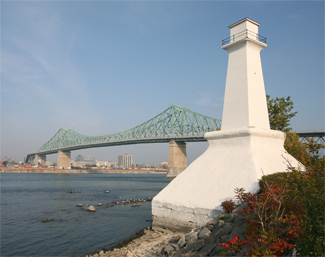 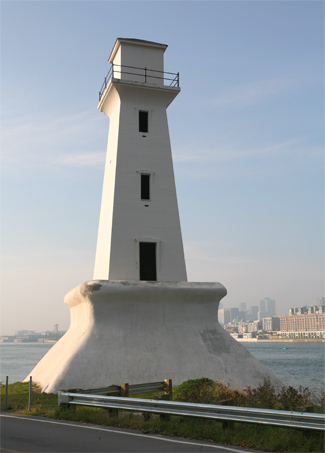 The Hochelaga Archipelago, also known as the Montreal Islands, is a grouping of over 200 islands at the confluence of the St. Lawrence and Ottawa Rivers. The Island of Montreal, the largest in the group, is home to most residents of the City of Montreal along with the Port of Montreal. Two islands were located in the St. Lawrence River, just downstream from the port: Île Ronde (Round Island) and Île Sainte-Hélène (Saint Helens Island). Samuel de Champlain named Île Sainte-Hélène in honour of his wife, Hélène de Champlain, while Île Ronde was likely named on account of its shape. The British constructed the stone Fort de lÎle Sainte-Hélène in the early 1820s to protect Montreal and the Province of Lower Canada from invasion by the United States, and nearly a century later, Île Ronde was chosen as the site for the front light of a pair of range lights to guide mariners along the river near the Port of Montreal. The ranges rear light was placed on the end of the Guard Pier that extended north from the Montreal end of Victoria Bridge to protect the wharves at Montreal. The following description of the new range, known as Ile Ronde Range, was published by the Department of Marine in 1908:

Range lights, which will be known as Ile Ronde range, were established in Montreal harbour, to mark the axis of the ship channel from Longue pointe gas buoy, No. 174 M, to Longueuil gas buoy, No. 181 M. The front lighthouse stands on the northeast end of Ile Ronde, on land 18 feet above the summer level of the river. The structure consists of a concrete pier, square in plan, with battered sides, whitewashed, surmounted by an octagonal iron lantern painted red. The height from the base of the pier to the top of the ventilator on the lantern is 32 feet. The light is a fixed white light, elevated 43 feet above the summer level of the river, and visible five miles in the line of range. The illuminating apparatus is catoptric.

The back tower stands on a concrete pier 17 feet high, square in plan, with battered sides, whitewashed, located on the outer end of the Grand [Guard] pier, about one and a seventh miles from the front lighthouse. The tower consists of an open steel framework, square in plan, with sloping sides, surmounted by an inclosed wooden watchroom and an octagonal iron lantern. The upper part of the side of the framework facing the channel is covered with wooden slatwork. The lantern roof is painted red, the remainder of the lantern, the watchroom and the slats, are painted white, and the steel frame brown. The height of the tower from its base to the top of the ventilator on the lantern is 64 feet. The light is a fixed white light, elevated 97 feet above the summer level of the river, and visible six miles from all points of approach. The illuminating apparatus is dioptric of the fourth order, and the illuminant petroleum vapour, burned under the incandescent mantle. The tower was supplied by the Goold, Shapley, & Muir Company, of Brantford, Ontario, for $503.80; and the erection work as well as construction of pier, &c., was done by days labour, for $5,736.52.

Herman Charland was appointed keeper of the light on Île Ronde on August 1, 1907 at an annual salary of $500. In 1910, a shelter shed was erected on Île Ronde for the keeper at a cost of $455.65. In order to enlarge the harbour at Montreal, the Guard Pier had to be moved west, forcing the Department of Marine and Fisheries to begin work in 1911 on a new pier in two feet of water just off the western side of Île Sainte-Hélène to support a new rear tower. This new lighthouse was completed in 1912, and the old skeletal rear range tower was taken down and its concrete base blasted and dredged away.

The new rear lighthouse for Ile Ronde Range was a white, square, forty-eight-foot-tall tower, built of reinforced concrete and topped by a wooden lantern with a red roof. The tower stood atop a square, concrete, forty-foot-tall pier with battered sides, and the entire structure thus had a height of eighty-eight feet. In its new location, the rear light was 2,158 feet from the front light instead of over a mile away. The lighthouse was built by day labour, under direction of A. Ouimet, and cost $7,492.

At the opening of navigation in 1914, the front range light started using a new illuminating apparatus consisting of a forty-inch, long-focus reflector with a lamp whose illuminant was petroleum vapour burned under an incandescent mantle. The reflector created a beam of 40,000 candlepower that could be seen over a one-degree arc on each side of the ranges axis. Over the remainder of the 250-degree arc of visibility, the light had a luminous power of just 450 candles.

The Ile Ronde Range Lights witnessed many significant changes to their surroundings. Between 1925 and 1930, the Montreal Harbour Bridge, known now as the Jacques Cartier Bridge, was built across the northern end of Île Sainte-Hélène to link Montreal with the south shore of the St. Lawrence River. The new bridge was situated between the range lights, but evidently didnt interfere with their effectiveness as they remained in operation for a few more decades.

Even bigger changes came in advance of the 1967 International and Universal Exposition, a Worlds Fair held in Montreal. Using twenty-five tons of fill from excavations made for Montreals metro, the site for Expo 67 was formed by joining Île Sainte-Hélène and Île Ronde and creating nearby Île Notre-Dame, an entirely new island.

Most of the pavilions were removed from the islands following the exposition, but a few remain standing. The French and Québec pavilions were converted into the Montreal Casino, the American Pavilion became the Montreal Biosphere, and Habitat 67 is now a condominium complex.

As part of the exposition, La Ronde, a permanent amusement park, was built on what had been Île Ronde before it was incorporated into the larger Île Sainte-Hélène. Since 2001, La Ronde has been owned and operated by Six Flags, which has added several new thrill rides to the park.

The disused lighthouse had recently been painted when the pictures on this page were taken in 2007.

For a larger map of Île Sainte-Hélène Lighthouse, click the lighthouse in the above map.

From Montreal, take QC-134 and Jacques Cartier Bridge to reach Île Sainte-Hélène and then exit at Parc Jean-Drapeau and follow directions to La Ronde. The lighthouse is in the parking lot for La Ronde, an amusement park.

The lighthouse is owned by City of Montréal. Grounds open, tower closed.