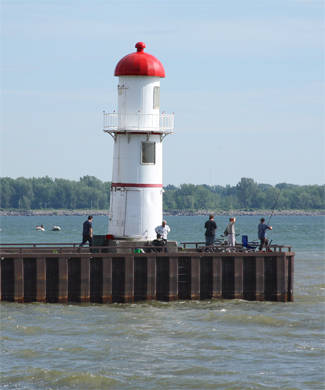 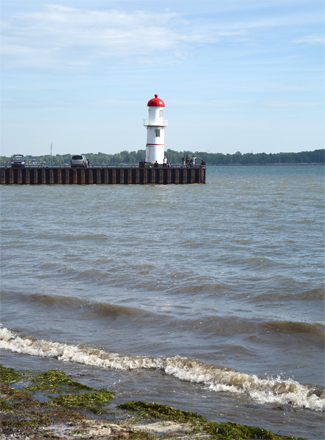 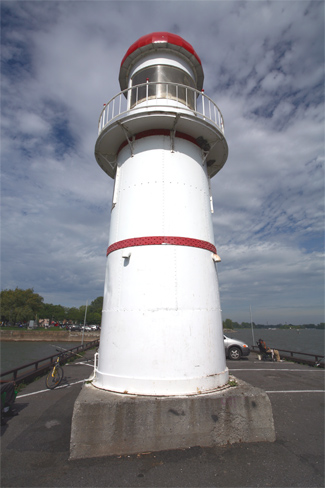 Just east of where it is joined by the Ottawa River, the St. Lawrence River flows along the southern side of the Island of Montreal. Along the islands southwest shore, the St. Lawrence River is known as Lake St. Louis, but it then narrows into the Lachine Rapids before broadening into Bassin De La Prairie and then resuming a more river-like appearance as it flows northeast along the island. The Lachine Rapids were a formidable obstacle for early mariners, forcing them to offload their cargo at the Port of Montreal and haul it overland to avoid the rapids.

The first attempt to dig a bypass canal through the Island of Montreal started in 1689, but the work was interrupted by an attack by the Iroquois and then faltered due to a lack of funds. A second attempt, initiated in 1821, proved successful, and the Lachine Canal opened to navigation in 1825. The canal was fourteen kilometres long and used seven locks, each thirty metres long, six metres wide, and one-and-a-half metres deep, to allow flat-bottomed boats to bypass the rapids.

Lachine derives its name from La Chine, French for China. Early explorers sought a route from New France across America and on to China, and the area where the canal was built was named Lachine in recognition of this dream.

Between 1843 and 1848, the canal was enlarged to accommodate bigger vessels with deeper draughts. At this time, the number of locks was reduced from seven to five, and the size of the locks was increased to a length of sixty-one metres, a width of thirteen-and-a-half metres, and a depth of 2.7 metres. This improved canal, coupled with others that had also been built to avoid rapids, finally made it possible for sizeable vessels to freely sail between the Atlantic Ocean and the Great Lakes.

In 1849, a lighthouse was established on a pier at the canals western entrance to help mariners make the transition between the canal and Lake St. Louis. This wooden tower stood twenty feet high and displayed the light from one lamp, set in a reflector. Three lightships or floating lights were also established on Lake St. Louis in 1849 to mark the lakes numerous shoals, and a pair of range lights was established at the eastern entrance to the Beauharnois Canal that linked Lake St. Louis to Lake St. Francis. In its report for 1850, the Commissioners of Public Works boasted that all these new lights served to light up the Lake, and render its navigation as safe in the night as in the day time.

John Norton was made keeper of Lachine Lighthouse along with the Lake St. Louis Lightship located just four-fifths of a mile away, though he hired a man to attend the floating light. In 1867, Lachine Lighthouse was described as a white square wooden building, twelve feet square and twenty-one feet tall, that displayed a fixed white catoptric light from a wooden lantern with a diameter of three feet. At this time, a base-burner fountain lamp and a fourteen-and-a-half-inch reflector were in use, and the light was shown through a glass pane that measured fifteen-and-a-half by fourteen inches.

On October 10, 1878, the Lake St. Louis Lightship near Lachine Lighthouse sank in a violent gale. Messrs. Gahery, Frechette, and Lefebvre were paid $1,000 to raise the vessel, and it was repaired during the winter so it could take up its usual position at the opening of navigation in 1879.

After serving for roughly thirty years as keeper, John Norton was replaced at the opening of navigation in 1880. Fifty-six-year-old Charles Leger was placed in charge of the light on Lachine Pier at an annual salary of $200 and Simeon Meloche was placed in charge of the nearby lightship at an annual salary of $250. Keeper Norton was seventy-eight when he was superannuated in 1880, but he didnt get to enjoy his retirement long as he passed away later that year.

In 1889, the salary of Charles Leger was raised fifty dollars in order to compensate him for keeping two new pole lights erected at Lachine in addition to the pier light. Alphonse Blondin replaced Charles Leger as keeper of the lights at Lachine in 1891, but his services were dispensed with in 1897 when an investigation found that he had farmed out the keeping of two of the lights entrusted to his charge.

The 1889 pole lights were replaced in 1900 by the current set of range lights as described in the following excerpt from the Annual Report of the Department of Marine for 1903:

The mast light maintained by this department on the upper end of the railway wharf at the upper entrance to the Lachine canal, was, in 1900, replaced by a permanent lighthouse forming the front light of a range established by the Department of Railways and Canals to indicate the axis of the dredged cut leading from the upper entrance of the canal into the 14 foot channel of the upper St. Lawrence system. These two lights were in 1902 transferred to the control of this department.

The front range lighthouse stands on an unpainted cribwork block, built on the west extremity of the railway wharf.

The tower is in the form of the frustum of a cone, in steel, surmounted by a cylindrical metal lantern. It is painted white; the roof of the lantern is of unpainted copper. The height of the building, from the deck of the block on which it stands to the top of the ventilator on the lantern is 29 ½ feet.

The light is an occulting white acetylene light, burning with full power for eight seconds, and with a dim light for two seconds, alternately, elevated 30 feet above the summer level of the lake. It should be visible 10 miles in, and over a small arc on each side of the line of range, and also in the channel in passing. The illuminating apparatus is catoptric.

The backlight is distant 904 feet N. 80°ree; 47 E., from the front one, and is a similar light. It is elevated 44 feet above the summer level of the lake, and should be visible 12 miles in, and over a small arc on each side of, the line of range.

The tower is similar to the front range light tower, but is higher. It stands on an unpainted cribwork block, in shoal water, in the bottom of the bay east of the railway wharf, and is connected with the shore by an elevated footpath. The height of the building, from the deck of the block to the top of the ventilator on the lantern, is 48 ½ feet.

The two lights in one, lead through the axis of the dredged cut, to the turning point 1 ½ miles distant.

As part of the planned St. Lawrence Seaway, the South Shore Canal was built on the south shore of the St. Lawrence River near Montreal to bypass the Lachine Rapids, as widening the Lachine Canal was no longer possible given the industry and private property that surrounded it. The Lachine Canal continued to operate after the seaway opened in 1959, but it finally closed to shipping in November 1970. The canal, which was designated a National Historic Site of Canada in 1929, was transferred to Parks Canada in 1978 for tourism development. After a mega revitalization project that saw the historic waterway restored and interpreted, the canal was opened to pleasure boating in 2002.

The Lachine front and rear range towers that now stand in St. Louis Park were each designated a Recognized Federal Heritage Building in 1991. The range lights remain active today, exhibiting fixed green lights to help mark the upper entrance to the canal.

For a larger map of Lachine Range Front Lighthouse, click the lighthouse in the above map.

From Autoroute 20 west of central Montreal, take Exit 60 and drive south on 32nd Avenue to Parc Saint-Louis on St. Lawrence River, where you will find Lachine Range Front Lighthouse. Paid parking is available on the wharf where the lighthouse stands.