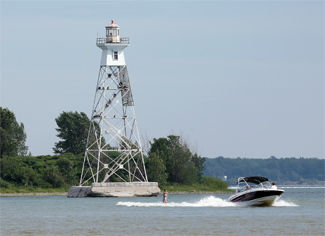 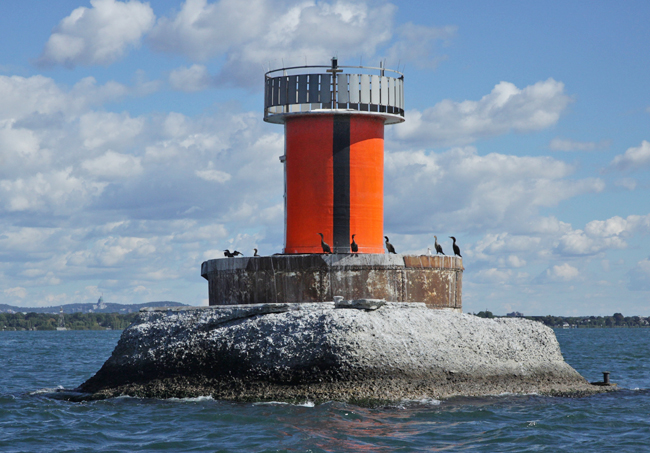 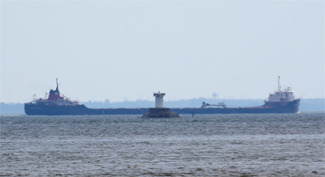 Along the northern shore of the St. Lawrence River, just west of the western entrance to the Lachine Canal, lies a trio of islands: Dixie Island, Busy Island, and Dorval Island. In 1915, the Department of Marine established a pair or range lights named Dixie Range, after the island near the rear range light, to guide vessels along the widening of the St. Lawrence River known as Lake St. Louis. At the time the range was built, vessels sailed through Lake St. Louis as they passed between the Lachine Canal and Soulanges Canal, but these two canals have since been superseded by the larger South Shore Canal and Beauharnois Canal.

The following description of the new Dixie Range appeared in the Annual Report of the Lake Carriers Association for 1915:

On September 1, 1915, two fixed white catoptric range lights to be known as the Dixie Range Lights, were established at the lower end of Lake St. Louis to mark the axis of the ship channel between Windmill Point Gas Buoy No. 98S and Lightvessel No. 13.

Front Light: The front light is exhibited 40 feet above the water from an enclosed white wooden tower, octagonal in plan, surmounted by an octagonal lantern, standing on a concrete pier in 7 feet of water, 4,550 yards 250° 2 from Lachine Wharf Front Light.

Rear Light: The rear light is exhibited 83 feet above the water from a brown skeleton steel tower, square in plan, with sloping sides, surmounted by an enclosed wooden watch room and an octagonal iron lantern, erected in 4 feet of water, 125 yards northwestward of Dixie Island and 2,216 yards 50° 30 from the front light. The height of tower from its base to top of ventilator is 82 feet.

The light has a luminous power of 30,000 candles and is visible 10 miles on the line of range.

Illuminant is petroleum vapor burned under and incandescent mantel.

This is an important improvement, as it accurately defines the channel at the most intricate point in the navigation of Lake St. Louis. The Department of Public Works proposes next season to remove the points of any shoals that extend within 250 feet or 300 feet of the axis of the range on either side.

The range lights were erected by day labour under the supervision of J.D. Weir for $7,923.05. Albert LeBlanc was hired as keeper of the front range at an annual salary of $320, while Ed. Massie was paid the same amount to care for the rear light.

In July 2019, Scott Walbert reported that the skeletal tower used for the rear light was gone, and sent this photograph of what appears to be a sector light mounted on the concrete foundation. The Canadian Coast Guard confirmed that the rear range light had been dismantled in July 2019 and a warning light placed on its pier. A sector light replaced Dixie Front Range Light in August 2018 and is known officially as Dixie Sector Light.

For a larger map of Dixie Range Lighthouse, click the lighthouse in the above map.

From Autoroute 20 west of central Montreal, exit at Avenue Dorval, drive south on Avenue Dorval for 1.2 km (0.8 miles), and then turn left onto Chemin Bord du Lac. After 1.3 km (0.8 miles), you will arrive at Parc du Millénaire from where you can get a view of the Dixie Range Lights.