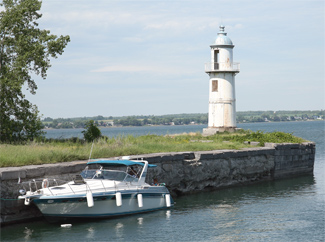 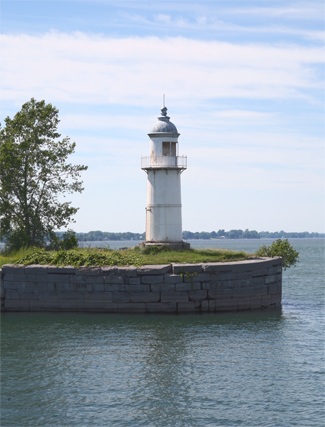 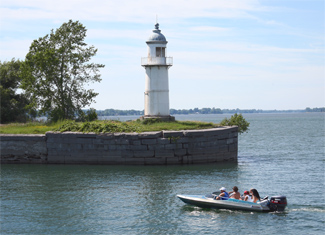 For centuries, the rapids at Cascades, Cedars, and Coteau impeded travel along a twenty-three-kilometre-long stretch of the St. Lawrence River between Lake St. Louis and Lake St. Francis, just upstream from Montreal. Between 1779 and 1782, the Royal Engineers built three short canals to bypass the Cascades. The first canal encountered as one left Lake St. Louis and headed upstream was La Faucille, a 125-metre-long canal, equipped with one lock. Next was Trou du Moulin, which was thirty-seven metres long and had no locks, and finally Split Rock, which had one lock. A fourth canal was completed near the mouth of the Delisle River in 1782 to bypass the Coteau rapids, while boats were forced to navigate the Cedars rapids. After roughly a decade of use, La Faucille and Trou du Moulin canals were abandoned in favour of the longer Cascades canal built across Cascades Point. Shortly after the unification of Lower and Upper Canada in 1841, the Board of Public Works decided to build the twenty-four-kilometre-long Beauharnois Canal along the south shore of the river to bypass the three sets of rapids. This canal was finished in 1845 and served for over fifty years until a canal with a greater depth was needed. As this could most easily be accomplished by a canal along the north shore of the river, work on the Soulanges Canal, which is twenty-three kilometres long, has a depth of 4.3 metres, and runs between Pointe-des-Cascades on Lake St. Louis and Coteau-Landing on Lake St. Francis, began in 1892 and was completed in 1899 at a cost of $4,251,158.

The Soulanges Canal was equipped with five locks, each 280 feet long and 46 feet wide, to raise and lower vessels a total of twenty-five metres, and the canal was one of eight that helped link the Great Lakes with the Atlantic. A redbrick, castle-like power house was built eight kilometres from Coteau Landing. At this point, the Grease River passes under the canal through a ten-foot culvert and empties into the St. Lawrence River. This flow of water was used to power two pairs of Victor turbines to generate electricity for powering the locks and lighting the canal so it could operate day and night. The north bank of the canal and piers at the upper entrance to the canal were lined by bright electric arc lights, suspended from white poles at intervals of 400 to 480 feet.

The Department of Railways and Canals of Canada awarded a contract for the construction and installation of range lights for the Soulanges Canal on March 27, 1900 to Farand et Delorme of Montreal. Before permanent range lights were erected, temporary lights consisting of locomotive headlights mounted atop skeleton-framed towers were used. On September 12, 1900, Thomas Monro, the civil engineer in charge of the canal, reported: The fixed red light is working well, and it clearly indicates the course to follow. The range lights were installed in pairs at each end of the canal and allowed the mariner to determine the correct approach to the canal entrances by superimposing a front and rear light.

In 1902, the Department of Marine announced the establishment of permanent lights at the canals upper entrance at Coteau Landing:

The buildings stand on gray limestone foundations, and are painted white with the lantern roofs red.

The front lighthouse stands on the south extremity of the west pier, and is 35 feet high from the ground level to the vane on the lantern. From it a fixed red light, elevated 31 feet above the water is shown, which should be visible 5 miles in, and over a small arc on each side of, the line of range.

The illuminant is compressed gas, but the light is watched.

The back tower stands 1,585 feet [37°] from the front one. It shows a similar light, elevated 46 feet above the level of the lake, which should be visible 5 miles in the line of range. The alignment indicates the west edge of the dredged approach to the canal and leads to the gas buoy at the southwest extremity of the dredging.

The following description of the range lights at the lower entrance at Pointe-des-Cascades was published by the Department of Marine in 1903:

The eastern end of the south pier head, at the entrance, is marked by an occulting gas light shown from the summit of an open work pyramidal steel structure. The frame rises 21 ½ feet above the pier.

The light is elevated 34 feet above the summer level of the lake and should be visible four miles from all points of approach. The illuminant is compressed gas. The light is white and shows a steady light for 8 seconds, and is totally occulted for 4 seconds alternately.

On the eastern extremity of the north pier head a fixed red light is shown from an iron lighthouse tower, circular in plan, surmounted by a circular metal lantern. The building is painted white, with the lantern roof red. The height of the tower from the top of its concrete foundation to the vane on the lantern, is 29 ½ feet. The light is elevated 37 feet above the summer level of the lake and should be visible 2 miles in the line of range. The illuminant is compressed gas. The illuminating apparatus is catoptric.

A similar light, shown from a similar tower, is maintained on the north bank of the canal, north of the second lock, and distant, 1,826 feet [244°] from the last described light.

The tower is 45 ½ feet high and the fixed red light is elevated 59 feet above the summer level of the lake. The light should be visible 2 miles in the line of range.

These two fixed red lights, in one, lead into the canal from the most westerly of the three gas buoys indicating the north side of the channel between the point where the channel leaves the alignment of the Beauharnois range lights and the axis of the canal.

The lights were established by the canal authorities as part of the new canal equipment, and were transferred to the care of this department in moving order.

The gas-operated range lights were converted to electricity in 1903, and the light shown from a steel skeleton framework on the east end of the south pier at the canals lower entrance was discontinued following the 1903 season. Between 1940 and 1950, over 5,000 ships used the Soulanges Canal each year.

The Soulanges Canal Lower Entrance Rear Range Lighthouse is now located in Parc des Ancres at Lock #3, but it originally stood much farther east near Lock #2. Parc des Ancres has roughly 100 anchors that were retrieved from the bed of the St. Lawrence River when it was dewatered during the construction of the St. Lawrence Seaway. The other three range lights still appear to be in their original locations.

For a larger map of Soulanges Canal Lower Entrance Range Front Lighthouse, click the lighthouse in the above map.

From Autoroute 20 W in Vaudreuil-Dorion, turn south on Chemin de Lotbinière/QC-338 and continue for 6.6 km (4.1 miles) to Pointe-de-Cascades. In Pointe-de-Cascades, turn left on Avenue des Cascades and then right on Rue Centrale. Continue over Soulanges Canal and then turn left on Chemin du Fleuve and follow it east to the end of the southern pier from which you can view Soulanges Canal Lower Entrance Range Front Lighthouse. You can also park on the other side of the canal and walk out to the lighthouse.