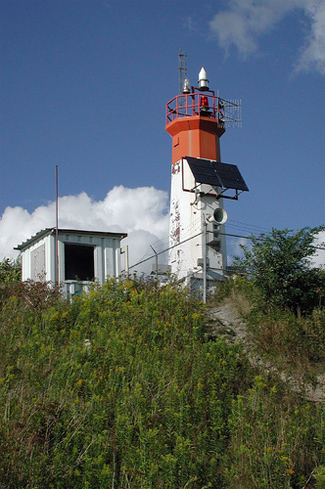 Anticipating a boom in shipping with the opening of the Saint Lawrence Seaway, the Toronto Harbour Commission started construction of a peninsula in 1959 to create an outer harbour. Millions of tons of fill were dumped into Lake Ontario to create a five-kilometre-long barrier known officially as Outer Harbour East Headland or more commonly as Leslie Street Spit.

By the early 1970s, it was apparent that the outer harbour would not be needed for port-related facilities, and other uses for the man-made peninsula were considered. One development plan called for the creation of an aquatic park that would have included a hotel, amphitheatre, private yacht clubs, and camping facilities, among other things. Some residents, concerned over the destruction of Ashbridges Bay and Marsh by the filling, preferred leaving the peninsula in a natural state. Friends of the Spit was thus founded in 1977 to promote the establishment of a public urban wilderness, and the repurposed peninsula was named Tommy Thompson Park in 1985 to honour Toronto's former Parks Commissioner. Active filling is still conducted at the inner portion of the headland, which is why access to Tommy Thompson Park is only permitted on weekends.

In 1974, the Toronto Harbour Commission marked the outer end of the headland, named Vicki Keith Point after a noted Canadian swimmer, with a light mounted atop a hexagonal concrete tower. Known on the Canadian Coast Guards List of Lights as Toronto Harbour Aquatic Park Light, the tower produces a red flash every ten seconds and is maintained in season by the Toronto Port Authority.

For a larger map of Toronto Harbour Lighthouse, click the lighthouse in the above map.

From downtown Toronto, take Lake Shore Boulevard east and then turn right on Leslie Street to reach Tommy Thompson Park. The park is open on weekends and holidays, except Christmas Day, Boxing Day and New Year's Day. Private vehicles are not allowed in the park, and it is 4.8 km (3 miles) from the park entrance to the lighthouse.