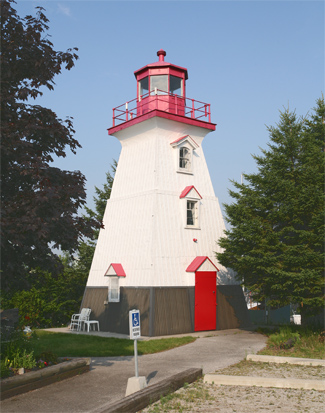 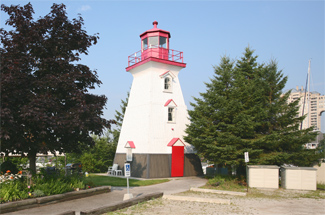 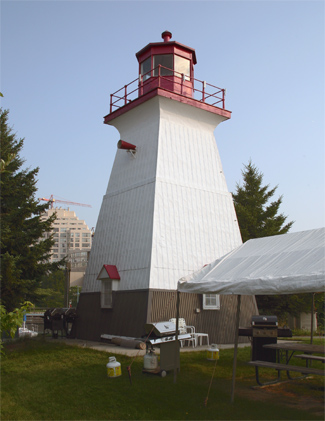 The Toronto Islands, which today serve as a recreational playground, were formerly part of a peninsula that arched out into Lake Ontario and formed Toronto Bay. Initially, the only entrance to the bay or harbour was through a gap between the tip of the peninsula and the mainland, but this changed in 1853, when a storm breached the peninsula. This new opening was easily repaired, but while bureaucrats debated whether a second entrance to the harbour would be beneficial, a more powerful storm carved out a more significant opening through the peninsula in 1858, and Toronto Harbour now had two entrances: the West Gap and the East Gap. The first light to mark the East Gap was described in the Annual Report of the Department of Marine for 1895:

For some years past, extensive work has been performed by the Department of Public Works in dredging a deep channel through the East Gap or eastern entrance to Toronto harbour, Lake Ontario, and in protecting this channel by breakwater piers of cribwork. This department proposes to mark the new channel, when completed, by a system of leading lights. In consequence of the low water which prevailed in the lake this summer, steamers preferred using this channel, although not completed, to the west entrance, and urged the early establishment of a light. A temporary light was consequently put in operation on the 9th September last; it is a fixed red light, elevated 16 feet above the water, and visible 6 miles from all points of approach. The illuminating apparatus is a dioptric lens of the seventh order. The galvanized iron building from which the light is shown is an experimental one, designed by Messrs. Noah L. Piper & Son of Toronto and was furnished the department at a cost of $140. The lantern is hoisted in a cylindrical column surmounting a hexagonal shed which stands 100 feet from the outer end of the east breakwater pier. It is hoped that lights of a more permanent character will be established next year.

In 1898, the experimental light was moved to the inner end of the pier, and a substantial steel, skeletal tower, whose top was enclosed with galvanized sheet iron, was placed on the outer end of the pier. Built at a cost of $1,125, the tower displayed an occulting red light at a height of forty-three feet above the lake.

A fog bell, purchased from W.E. Decrow of Boston, Massachusetts for $350, was mounted on a platform affixed to the lakeward side of the outer tower in 1900. The bell was situated twenty-five feet above the lake, and could be struck 10,000 times with just a single winding of its clockwork machinery.

An improved fog signal was placed in operation at the opening of navigation in 1905 in the form of a diaphone that sounded a seven-second blast every forty-five seconds. The square, wooden fog alarm building stood on the beach just east of the pier and had a dormer on its southeast side from which the fog horn projected. Jesse Tulloch of Toronto erected the building at a cost of $1,808, while the Canadian Fog Signal Company supplied the fog alarm plant for $9,882.

In 1906, an enclosed, square, wooden, pyramidal tower, with a height of twenty-two feet, replaced the experimental light on the inner end of the east pier. A wooden dwelling was built for the fog alarm engineer in 1909 by J.D. Young & Son of Toronto for $3,296.

William Montgomery served as keeper of the pier lights from 1895 to 1907. George McKelvie was hired in 1905 to run the fog alarm, and after Keeper Montgomery left in 1907, he was placed in charge of both the range lights and the fog alarm.

On June 1, 1915, a rear light was established 1,650 feet north of the outer pierhead light to form a range for entering the East Gap. To create the light, a lantern box was mounted on a steel tower owned by the Hydro-Electric Commission, and a 100-watt tungsten electric lamp was placed in the focus of a reflector mounted inside the box.

The inner and outer pier lights were removed in April 1973, when the East Gap was being widened. The towers were stored pending the completion of an aquatic park on Leslie Street Spit, where they were to be placed on display, but when plans for the park fizzled, the towers languished at a marine terminal for several years.

After months of negotiations, Ken Maxwell was able to obtain the lighthouses, and on April 21, 1981, the two towers were loaded on a barge and towed from Toronto Harbour to Humber Bay Park West. A concrete pad was poured for the taller lighthouse on the grounds of the Mimico Cruising Club in November 1981, and the interior of the lighthouse was cleaned, rebuilt, and insulated to temporarily house the clubs offices. The lighthouse office opened in March 1982 and served in this capacity until a clubhouse was finished in 1984.

The smaller lighthouse was given to the Etobicoke Yacht Club, which restored it and placed it at the entrance to their marina.

Though far from their original home, the towers are enjoying a second life in a nice, nautical setting.

For a larger map of Toronto East Entrance Outer Lighthouse, click the lighthouse in the above map.

From Gardiner Expressway, west of downtown Toronto, take Lake Shore Exit, travel south on LakeShore Boulevard West passing through two traffic lights, and then take the next left onto Humber Bay Park Road West. The grounds of Mimico Cruising Club, where the lighthouse is situated, are not open to the public, so your best option to view the tower is to take your first left from Humber Bay Park Road West into the public parking lot. After parking, proceed west on foot and you will find a waterfront trail from which you can view the lighthouse from across the water.

The lighthouse is owned by Mimico Cruising Club. Grounds/tower closed.