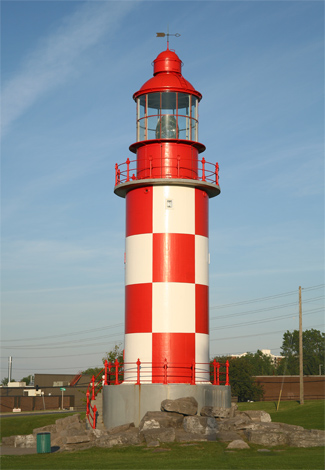 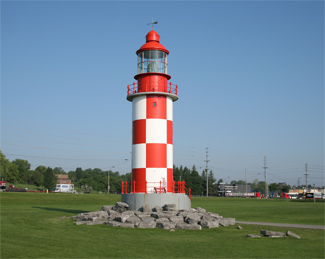 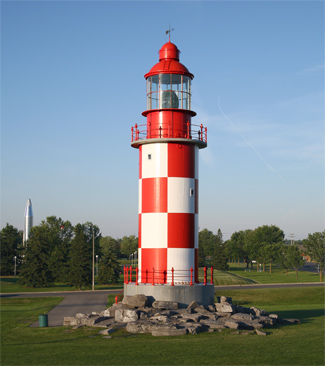 Thousands of people pass by the red-and-white-checkered Cape Race/Cape North lighthouse every day as they drive along St. Laurent Boulevard in Ottawa. Located far from any navigable water, its flashing light now welcomes visitors to the National Museum of Science and Technology, where once it marked the first landfall for mariners traveling from Europe to Canada and the United States.

Several shipwrecks off the coast of Cape Race, the extreme southeastern corner of Newfoundland, were the catalyst for the construction of the lighthouse at the Cape in 1856. Built with thirty-two cast-iron plates, joined together with bolts, the tower originally housed a light composed of eight lamps with polished reflectors, which at fifty-five metres (188 feet) above the sea could be seen for seventeen nautical miles. The plates were cast in Britain, transported to Cape Race, and bolted together there.

The cast-iron plate construction was easy to erect and required low maintenance, but was subject to constant condensation and hoar frost in the winter.

Even after the establishment of the light, shipwrecks continued to occur off the shoreline, including the Welsord, which hit the rocks just below the lighthouse and took down with it the entire crew except for four men who were rescued by the lightkeepers. There are at least 360 known shipwrecks along the coastline near Cape Race.

A rotating mechanism, which gave a flashing signature, was installed in the tower in 1866, and, to further aid mariners, a steam whistle was added to the station in 1873.

By the 1900s, it was apparent that a stronger light was needed at Cape Race, and when the current Cape Race Lighthouse Tower, a cylindrical concrete tower, was built in 1907, the cast iron structure was available to be used elsewhere. In 1909, the tower was moved to Cape North, at the tip of Cape Breton Island in Nova Scotia. The lighthouse began service at the opening of navigation in 1911 and stood vigil over Cabot Strait until 1980.

Dr. David Baird, director of the National Museum of Science and Technology in Ottawa, was looking for a lighthouse for the museum grounds in Ottawa. To be considered, a lighthouse had to meet four criteria: 1) it had to be available, 2) it had to be historic, 3) it had to be one that could be taken apart and put back together, and 4) it had to be in good enough condition to withstand a move. When the Coast Guard announced its plans to demolish Cape North Lighthouse in 1978, Baird knew he had found his lighthouse.

Cape North Lighthouse actually served two years beyond its planned retirement in 1978, as work on a new tower for Money Point didnt begin until July 1980. The faithful, iron tower went dark in early October of that year, after a temporary light had been established. The Fresnel lens was first removed from the tower, and each of its four panels was carefully packed in foam plastic. Ian Jackson, a supervisor from the museum, arrived on scene on October 14, to witness the dismantling of the tower so he would be able to put it back together.

A truck, pulled by bulldozers, transported the five-by-eight-foot, three-quarter-ton, lighthouse sections, four at a time, up the mountain behind the station. As the towers iron dome was too wide for the truck, it made the ascent dangling from the crane that had been used to disassemble the tower. The pieces of the lighthouse were loaded onto two flatbed trucks and hauled to the Coast Guard maintenance depot in Dartmouth, where they were sandblasted and painted before being shipped to Ottawa. The three-week effort to remove the lighthouse from Money Point finished just in time, as the very next day the rudimentary roadway was snowed in for the winter.

A concrete foundation was poured on the grounds of the museum to support the lighthouse, and large limestone boulders were placed around the tower to suggest a rocky Atlantic shore. The third-order Fresnel lens was mounted in the lantern room to complete the picture.

On June 23, 2010, an earthquake, which measured 5.0 on the Richter scale, shook central Ontario and caused a portion of the pool of mercury used to float the lens in the lighthouse to spill out of its bowl. Before the toxicity of mercury was known, it was commonly used in lighthouses to allow the massive Fresnel lenses to rotate with virtually no friction.

Museum staff promptly cleaned up the spill, but subsequent air quality readings were considered too high, and Magellan Engineering was contracted at a cost of $7,000 to perform a complete decontamination of the tower. Even after the professional cleanup, the air quality was still deemed too dangerous for long-term exposure. As the mercury evaporates in warm weather, the levels will return to normal and allow resumption of guided tours.

A catchment system will be installed below the mercury trough to prevent another spill in the event of future earthquakes. The trough contains about three litres of mercury, and of that, approximately one litre was spilled. Museum staff recovered nearly three-quarters of a litre.

For a larger map of Cape Race/Cape North Lighthouse, click the lighthouse in the above map.

From Highway 417 in Ottawa, take Exit 115 and travel south on St. Laurent Boulevard for 2.1 km (1.3 miles), and you will see Cape Race/Cape North Lighthouse on your left.

The lighthouse is owned by the Museum of Science and Technology. Grounds open, tower open in season.