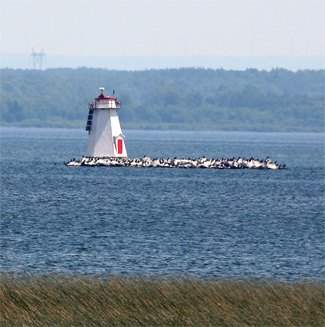 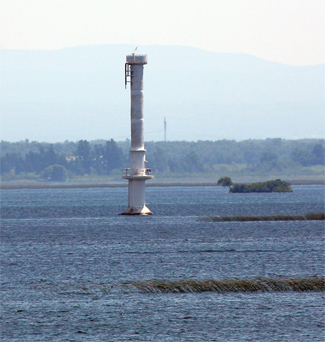 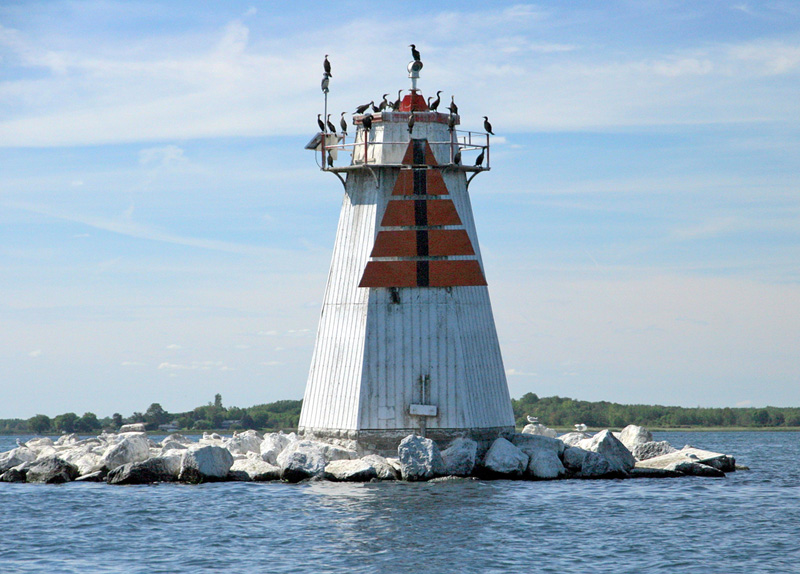 Lake St. Francis is an expansion of the St. Lawrence River situated between Cornwall, Ontario on the west and Salaberry-de-Valleyfield, Quebec on the east. In 1844, the Board of Works of the Province of Canada built Lancaster Lighthouse on a pier in Lake St. Francis for the guidance of the Packets touching at Lancaster with the Mails. This lighthouse stood twenty-feet tall and exhibited a white light that could be seen up to eight miles.

The Beuaharnois Canal opened in 1843 bypassing rapids on the St. Lawrence River and linking Lake St. Francis to Lake St. Louis near Montreal. Between 1842 and 1847, the Cornwall Canal, Galop Canal, Farrans Point Canal, and Rapide Flat Canal were all completed on the St. Lawrence River, bypassing additional rapids and allowing vessels to freely sail between the Atlantic Ocean and Lake Ontario.

The following description of Lancaster Lighthouse was provided in the Annual Report of the Department of Marine for 1877:

This lighthouse was visited on the 5th July. Mr. Thomas Hill is the Keeper. It is a white wooden building, containing a white fixed catoptric light, with three dual-burner fountain lamps, with two reflectors, one 15-inch and one 14-inch. The cross light has no reflectors; size of glass, 16 x 14 inches. The lantern is of iron, six feet in diameter. The lighthouse requires painting. 100 cords of stone are required for the piers, to protect them from ice.

Thomas Hill, who had served as keeper of the lighthouse for over twenty years, was superannuated in 1877 and replaced by Thomas H. Hill who looked after the light for thirty years.

In 1885, Lancaster Lighthouse was accidentally destroyed by fire, necessitating the erection of a new tower as described in the Annual Report of the Department of Marine for 1886:

A substantial new building has been erected on the shoal above Lancaster, to replace that reported destroyed by fire. It was put in operation on the 26th June last, when the temporary lights maintained since the destruction of the old tower were discontinued. The light is fixed white, elevated 33 feet above the level of the lake and should be visible 10 miles from all parts of the channel. The illuminating apparatus is dioptric, of small size. The tower is a hexagonal wooden building, 30 feet high from its base to the lantern vane, and is painted white, with the lantern red. It stands upon a hexagonal stone pier built on an artificial islet of riprap close to the edge of the channel. The building was erected under contract by Mr. John Meadows, his figure being $1,055. The total expenditure in connection with the new tower was $1,532.77.

Besides the construction contract, additional expenses for completing the lighthouse included $374.29 for the lantern room and lighting apparatus supplied by E. Chanteloup, $46 for plate glass, and $4.80 for advertising for tenders in the Cornwall Reporter and the Morrisburg Courier.

Seventy cords of riprap were placed around the lighthouse in 1892 and another twenty cords were added in 1894. The Department of Marine described how the regular addition of stone built up an island foundation for the lighthouse: This station, like other light stations on the St. Lawrence and Ottawa Rivers where a tower is built on a pier, is surrounded by loose stone which in each case gradually forms an island to serve as a permanent foundation, this being found to be the most efficient and cheapest protection against both the winter shoving and the spring running of ice; by degrees a rocky islet is formed when the stone attains its natural slope until eventually no further stone is required.

For a larger map of Lancaster Range Lighthouse, click the lighthouse in the above map.

The range lights are best viewed from the water, but distant views can be had from the nearby shoreline.

The lights are owned by the Canadian Coast Guard. Towers closed.