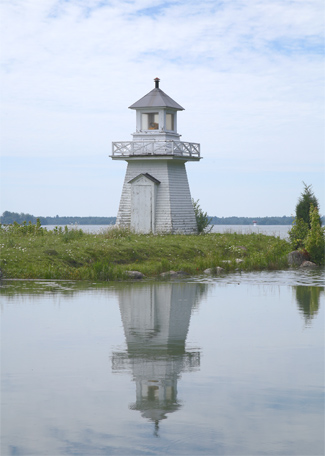 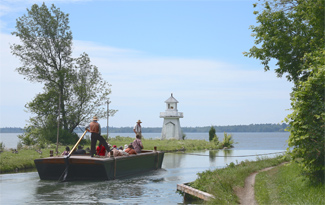 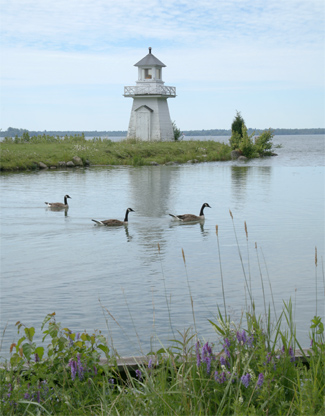 A proposal to construct the Cornwall Canal to bypass the Long Sault Rapids on the St. Lawrence River was presented to the legislature of Upper Canada as early as 1816, but it wasnt until the Rideau Canal, linking Ottawa and Kingston, was completed in 1832 that an act authorizing the canal was passed. Fearing that the Rideau Canal would divert significant amounts of traffic from the St. Lawrence River, the town of Brockville began petitioning for construction of the Cornwall Canal in 1830.

Work on the Cornwall Canal began in 1834, but a severe depression and the Rebellions of 1837 led to work being suspended. Construction resumed in 1842, just a year after the Province of Canada was created from Upper and Lower Canada, and the canal opened to traffic in 1843. The eleven-mile-long Cornwall Canal ran along the northern side of the St. Lawrence River from Cornwall to Dickinsons Landing and employed six locks to lift vessels a total height of forty-eight feet. Between 1842 and 1847, the Beauharnois Canal, Galop Canal, Farrans Point Canal, and Rapide Plat Canal were built, bypassing additional rapids in the St. Lawrence and allowing vessels to freely sail between the Atlantic Ocean and Lake Ontario.

The following paragraph from the Annual Report of the Department of Marine for 1891 describes how the lighthouse was placed under control of the department in 1890 and then rebuilt in 1891:

A small lighthouse at Dickinsons Landing, at the head of the Cornwall Canal, which had previously been maintained by the Department of Railways and Canals, was, at the suggestion of the Auditor General, transferred to the charge of this Department on the 1st July, 1890. Inspection of the existing lighthouse tower indicated that it was very much out of repair, and as it was a small and inconvenient building, it was decided to replace it by a new tower. The work was carried out under contract by Mr. Wm. H. Miller of Moulinette, whose price for the new tower was $253. The work was completed on the 5th October last, the total cost being $326.33.

The new tower, which stands on the pier-head on the south side of the west entrance to the Cornwall Canal, is a square wooden building, painted white, standing 22 feet high above the pier. The light is fixed white, dioptric and leads to the entrance to the canal from the river above.

In 1906, the characteristic of the lighthouse, then known as Dickinson Landing Lighthouse, was changed from fixed white to fixed. That same year, John Stoneburner, who had been in charge of the light since 1881, was replaced by Remi Casgrain.

In the 1920s, the lighthouse was maintained by the Department of Railways and Canals, and then control of the beacon was passed to newly formed Canal Administration of the Department of Transport in 1936, where it remained for the rest of its service.

In 1932, the current version of the Welland Canal opened between Lake Ontario and Lake Erie with a depth of twenty-seven feet, and in 1943, a new Soo Lock with a depth of nearly thirty feet opened to vessels traveling between Lake Huron and Lake Superior. Though the canals on the St. Lawrence had been deepened since they were built, they only had a depth of fourteen feet and were unable to accommodate the mighty lakers of the time. Instead, cargo destined for Montreal and points farther east would often be unloaded at a trans-shipment terminal at Prescott and then loaded on smaller canallers.

In the 1950s, Canada and the United States agreed to construct the St. Lawrence Seaway which would permit modern, deep-draft vessels to pass between the Atlantic Ocean and the Great Lakes. Sections of the river were diverted and millions of cubic yards of rock and clay were dredged from the riverbed to create a twenty-seven-foot-deep shipping channel with seven locks between Montreal and Point Iroquois.

Just upstream from Cornwall, the 3,300-foot-long Moss-Saunders Power Dam, named for Robert Moses, chairman of the New York Power Authority, and Robert H. Saunders, chairman of Ontario Hydro, was built between 1954 and 1958. The dam created Lake St. Lawrence, whose waters flooded the Long Sault Rapids along with six villages and three hamlets in Ontario. Prior to the inundation, residents of the Lost Villages were relocated to the newly constructed towns of Long Sault and Ingleside.

Eighteen cemeteries were impacted by the creation of Lake St. Lawrence, and over 2,000 graves were moved to the St. Lawrence Valley Cemetery, which was established by the Ontario Hydro Commission in 1957. Tombstones that were cracked or broken were placed in a wall at Crysler Memorial Park near Upper Canada Village.

Several buildings from the Lost Villages were saved and can now be visited at the Lost Villages Museum and Upper Canada Village. The Lost Villages Museum is located in Ault Park, three kilometres east of Long Sault, and features ten heritage buildings restored by The Lost Villages Historical Society, while Upper Canada Village is located nine kilometres west of Ingleside and is home to the lighthouse relocated from Dickinsons Landing. The lighthouse should fill right at home, for just as at Dickinsons Landing, it is situated on the south side of the entrance to a canal.

For a larger map of Dickinson Landing Lighthouse, click the lighthouse in the above map.

From Highway 401, take Exit 758, travel south for 1.6 km (1 mile), and then turn left onto Highway 2. After 2.1 km (1.3 miles), turn right to enter the parking area for Upper Canada Village and Crysler's Farm Battlefield. You can get this view of the lighthouse from a grassy area adjacent to Crysler's Farm Battlefield or you can pay to enter Upper Canada Village, where you can ride a canal barge that passes the lighthouse and experience many interesting exhibits. You cannot walk right up to the lighthouse. It has to be viewed from across the small canal.