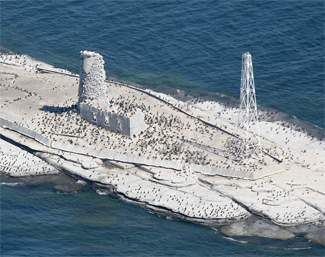 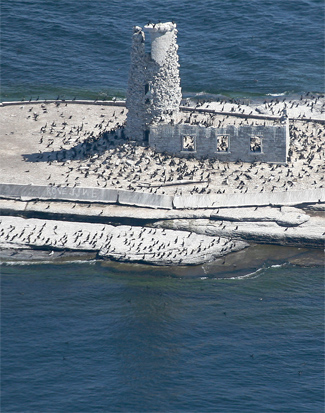 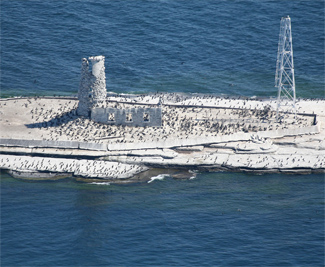 According to local legend, Scotch Bonnet Island was named by a homesick Scottish sailor, who thought that the islands low-lying profile resembled a Tam OShanter, the traditional hat worn by Scottish men. The island is located 4.6 kilometres off Prince Edward County and 1.6 kilometres southwest of the larger Nicholson Island, which is home to a private pheasant hunting club that hosted Bing Crosby in 1965. In its annual report for 1844, the Department of Public Works for the Province of Canada noted a need for a lighthouse on the island:

A House and second class Light upon the Scotch-bonnet Island, near Nicholson Island, there is a shoal running to a long distance, to the South of it, upon which the breakers shew themselves in heavy weather; the establishment of this Light would add much to the safety of that part of the Lake. It should be colored.

Work on the lighthouse had begun by 1853, as indicated by the following information contained in the report of the Department of Public Works for that year: In Lake Ontario, a Light House is being built on the Scotch Bonnet or Egg Island, a small low Island lying S. E. off Presquisle, and in the direct line of the Mail and other vessels running down the Lake from Coburg, &c.

In November 1854, the recently launched schooner Norfolk of Port Dover went ashore on Scotch Bonnet Island in a gale and became a total loss. The ships captain and all hands, four in number, were lost. Though the lighthouse might not have prevented this tragedy, a resident keeper may have been able to render assistance.

Scotch Bonnet Lighthouse was nearly finished by the end of 1855, but it was not placed in operation until September 1856, after the lighting apparatus was taken to the island and installed in the towers lantern room.

Built of limestone, the lighthouse consisted of a circular, fifty-four-foot-tall tower attached to a small residence for the keeper. In 1861, eight lamps and reflectors were being used in the lantern room to produce a fixed white light that could be seen for up to thirteen-and-a-half miles. At this time, a combination of whale and vegetable oil was used in the lamps, and 205 gallons were consumed each year. The lamps were adapted to the use of coal oil in 1864, as whale oil had become too expensive.

John Giroux, the first keeper of the lighthouse, served for three seasons before being replaced my Samuel Wilson. During Wilsons service, a house was built on Nicholson Island in 1862 to serve as the keepers winter accommodations, as the stone dwelling on Scotch Bonnet was only fit for occupation during the summer months. The islands harsh conditions are likely the reason why most of its keepers served for just a couple of years. Before Robert Pye was placed in charge of the light in 1877, none of the previous six keepers had served more than six years.

Keeper Pye, a blacksmith, served at Scotch Bonnet for eighteen years and maintained the station in good order as evidenced by this inspection report for 1878 made by Darius Smith, the Superintendent of Lighthouses above Montreal:

Arrived at this lighthouse on the 5th July; it is a white stone building, 54 feet high from base to vane; it shows a white fixed catoptric light, and can be seen 20 miles in clear weather; the lantern is of iron, 7 feet in diameter, and contains ten lamps, six mammoth flat-wick and four No. 1 base-burners with ten 14 inch reflectors. Size of glass 14 1/2 x 18 inches.

This wants pointing and whitewashing; lantern requires repairs, as it leaks. A new boat is required at this Station; keeper states he can procure a suitable boat for $45, with centre board and sail. A new fog-horn is wanted, as the old one is worn out.

Robert Pye is keeper, who has a family of three; he keeps everything in very good order.

After he closed up the station for the season in December 1891, Keeper Pye found it exceedingly difficult to reach shore, and commented that he had not known so much rough weather during any fall since his appointment fifteen years ago. Robert Pye passed away in 1895 at the age of sixty-nine, and the standard gratuity of two-months salary was awarded to his widow. Many people wanted to see Pyes widow, Cynthia, or son appointed keeper of the light, but the position was instead given to William Farley.

A new iron lantern was placed atop Scotch Bonnet Lighthouse in 1882, and in 1909, a fourth-order, 360° French lens with a Diamond vapour installation replaced the array of lamps and reflectors used in the lantern room.

The era of lightkeeping came to an end on Scotch Bonnet Island in 1919, when a new light that burned acetylene compressed in acetone was installed in the lantern room and the foghorn was discontinued. The characteristic of the light was changed at this time from fixed white to a light that was alternately visible for one second and eclipsed for three seconds.

For a larger map of Scotch Bonnet Island Lighthouse, click the lighthouse in the above map.

A distant view of Scotch Bonnet Lighthouse can be had from near the end of Highway 20 on Prince Edward Peninsula, west of Wellington, but the best views would come from the water.

The lighthouse is owned by Environment Canada. Grounds/tower closed.