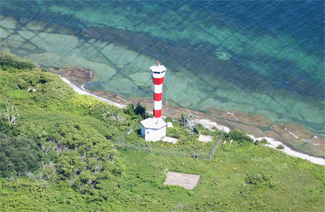 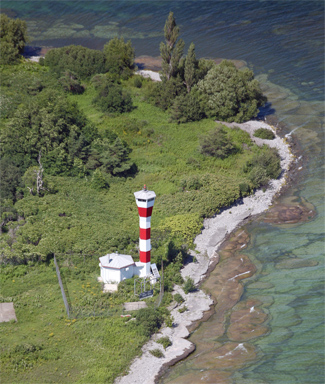 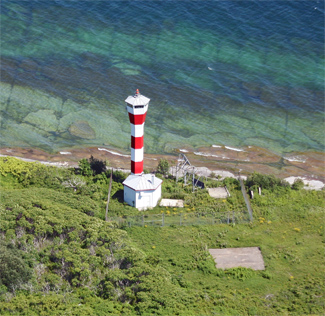 In January 1827, a petition from various captains and ship owners, praying for a lighthouse on the False Ducks, was referred to a select committee of the House of Assembly of Upper Canada. The committee heard testimony from Charles Macintosh, captain of the schooner Superior, who reported that the schooner Hibernian had wrecked on the False Ducks six years earlier and that vessels were obliged to lie to at night at great risk rather than try to pass between the False Ducks and Main Duck Island. Convinced that a lighthouse on False Ducks would be a very important advantage to navigation, the committee recommended that £1,000 be appropriated and that commissioners be appointed to select a site for and superintend construction of a lighthouse.

Shortly after their appointment in May 1828, the three commissioners inspected the lighthouse built by the United States on Galloo Island in 1820 and then selected the southeast point of False Duck Island, twenty-nine miles west of Galloo Island, as the site for another light to help mariners navigate the eastern end of Lake Ontario. Tenders were invited for constructing False Ducks Lighthouse, and on June 2, 1828, Robert Matthews, William Allan, William Scott, and John McLeod were contracted to erect a tower of the following description for £546:

The building was to be circular in form  sixty feet in height from the ground line  ten feet in diameter within walls, which were to be four feet in thickness at the bottom  and gradually diminishing to a thickness of two feet at the top. The floor or platform for the reception of the Lantern was to be of cut lime stone well jointed and cemented, and supported by a substantial brick arch  The outer face of the Tower was to be rough cast in a neat and durable manner.

Dr. William Hardy of Brownville, New York was contracted to supply an iron octagonal lantern room for £168, while Winslow Lewis of Boston, Massachusetts was paid $703.70 for providing ten lamps, ten sixteen-inch reflectors, glass for the lantern room, and other necessities.

The contractors were to have the tower ready to receive the lantern room on September 15, 1828, but the completion date was pushed back to the end of October, after it was discovered that stone for the lighthouse would have to be obtained from quarries at Mill Creek near Bath and on Waupoos Island in Prince Edward Bay instead of on False Duck Island. Fearing that it might be damaged by frost, roughcast was not applied to the towers exterior until the following spring. False Ducks Lighthouse was finally placed in operation on July 25, 1829.

As the initial appropriation was sufficient to cover just ten of the needed fifteen lamps and reflectors, the commissioners asked for an additional £85 for five more along with four to five hundred pounds to build a stone dwelling for the keeper.

Joseph Swetman was hired as keeper of the lighthouse in 1828 at annual salary of £100. After his salary was trimmed in 1833 to just £62, an amount fixed for all keepers with no regard to their situation or local circumstances, Swetman penned the following petition to the Lieutenant Governor asking for a raise:

That Your Petitioner has a large family entirely dependent on him for support and has no other means of providing for them than by his salary as Light House Keeper, the land on the said Island being incapable of cultivation from the barrenness of its soil, and consequently Your Petitioner is obliged to purchase his provisions.

That Your Petitioner being bound by his duty to make the Island his constant residence until the close of Navigation is thereby necessarily compelled to remain thereon during winter, by which he is subject to many privations which are further augmented by the decrease in his salary, so that he is not only unable to provide against sickness and other casualties, to which he is liable from being cut off from all society, to which he many flee for succour, but also much straightened to procure a sufficiency of absolute necessaries.

That Your Petitioner being compelled periodically to leave the Island is obliged to employ the elder branches of his family at such times to superintend the management of the Light House, whereby he is prevented from procuring for them any other subsistence by their own industry.

That Your Petitioner from his Isolated situation is prevented from engaging in any other pursuit, whereby he might add to his means of support, his present reduced salary being altogether inadequate for that purpose.

Swetmans petition resulted in his salary being restored to £100, but in 1837, the salary of any keeper at a remote station was set at £85. While Joseph Swetman was looking after the light on False Duck Island, his brother William was placed in charge of the newly erected Presquile Point Lighthouse in 1840. In 1863, Frederick Swetman replaced his father as keeper on the False Ducks. Together, Joseph and Frederick Swetman served a combined fifty-eight years, which makes it easy to understand how the island came to be known as Swetman Island.

A new lantern room and a third-order Fresnel lens were placed atop False Ducks Lighthouse in 1885, and on November 12, 1904, a fog alarm was established at the station. The rectangular fog alarm building was built seaward of the lighthouse and had a trumpet projecting from its southerly face at an elevation of fifteen feet about the lake. Sounded by air compressed by oil engines, the diaphone produced a four-second blast each minute as needed. Duplicate machinery was added to the fog alarm building in 1906.

On the morning of December 11, 1902, the wooden steamer John Hall, with the schooner barge John R. Noyes in tow, left Charlotte, New York bound for Deserento, Ontario with a cargo of roughly a thousand tons of coal. Assisted by his son Jerome, Captain Tim Donovan was in charge of the Hall, while George, another son, was in command of the Noyes.

Strong east winds, fog, and snow combined to slow the steamers progress, and the two vessels sought shelter off Salmon Point in the lee of Prince Edward County. When the fog lifted, Captain Donovan decided to make a run for the Bay of Quinte. At 8 a.m. on December 13, the vessels were near the False Ducks when the steamer Hall developed engine troubles and the Noyes was cut loose.

The Noyes drifted helplessly for two days, before its crew of five was rescued off of Lakeside, New York by the lifesaving crew from Charlotte. Now abandoned, the Noyes was swept across Lake Ontario and grounded on Salmon Point, where Keeper McDonald thought it might be the missing John Hall. These hopes were crushed when the vessel went to pieces and its stern washed ashore bearing the identification John R. Noyes. Wreckage from the Hall was discovered a few days later on Main Duck Island, confirming everyones fear that the vessel had foundered shortly after parting with the Noyes.

James Hudgins was serving as keeper at False Ducks when the Hall was lost, and after the accident, the superintendent of lights led a commission that determined that Hudgins neglected to have his light in operation from the 10th to the 14th December, 1902, while navigation was still open, and that during this period the steamer John Hall with all hands on board was lost in a severe storm in close proximity. Based on the findings, Keeper Hudgins was dismissed, and Dorland Dulmage was placed in charge of the light.

A grandchild of Dorland Dulmage gave the following account of the dramatic events that occurred on the island during his service:

On Sunday afternoon, November 26, 1905, sullen, black thunderheads began to roll up in the west. As the storm drew near, a wind squall lashed the lake into a white foam. Breakers broke with a deafening roar upon the shoals which surround the False Ducks. Trees swayed and tossed in the wind. Then it began to thunder and lightning.

Mr. Dorland Dulmage, at that time lighthousekeeper, was, with his wife and three children eating supper.

You had better see if the lights alright, Clayt, said Mr. Dulmage to his son. Clayton went to the door, looked at the light which had been lighted some time before, then stood looking at the storm. Lightning was striking in the water, followed by terrific crashes of thunder that terminated in incessant, long, heavy rolls.

Clayton came back in. That lightning is close, he said. At that moment there was a more vivid flash of lightning than any before. Clayton rushed back to the door.

Did it strike? asked Mr. Dulmage, who rushed to the door also. He saw three bolts of lightning coming in the shape of a three-tined fork and stepped back into the house. Clayton remained in the doorway. There was another terrific clap of thunder. I don't think that last flash struck anything, said Mr. Dulmage, and sat down to finish his supper.

Instantly every door in the house flew open. Clayton was leaning against the casing of the door with his mouth drawn sideways by the shock.

Pa, get my boots, yelled Mary Bertha, they're under the couch.

Get your own boots, he replied, and continued, Jim, you take Mary Bertha and go to the station.

Jim and Mary Bertha ran to the fog station, while hail pelted all about them. The house, soon after it was struck, was all in flames. The bolt had ignited the coal oil in the wood house and the fire soon spread to other parts of the building. As the flames ignited each of seven large drums of coal oil, there was an explosion which could be heard above the thunder. In the woodhouse there was also two tons of coal. Flames leaped high into the air, windows burst outward, and above all was a cloud of black smoke.

One of the other two bolts struck the lighthouse, broke a plate glass window, followed the spiral stairway, bearing out seven steps and came out through the door. The other struck the station, disconnected all the wirings, and came out through the wall above the cistern. The bolt that struck the house followed along the cement walk, then ploughed a furrow in the earth from the walk to the verandah, about a foot deep.

The lighthousekeeper and his family spent the night in the fog station. The next morning, since only a few articles were rescued, a scanty meal was cooked upon the coals from the fire of the night before. Fishermen came from the point, three miles away, to see if everyone was alive and to take them ashore.

In 1907, a new dwelling and oil shed were erected, and repairs were made to the lighthouse.

Fort Construction Company of Prescott commenced construction of the current hexagonal, reinforced-concrete lighthouse on False Ducks on July 20, 1965, and the sixty-foot tower was placed in operation on November 3rd of that year. No longer needed, the old stone tower was toppled by the lighthouse tender Simcoe on June 3, 1966.

As a Canadian centennial project for South Marysburgh and Athol Townships, a thirty-foot stone tower was erected at the head of Prince Edward Bay and topped by the iron lantern and third-order Fresnel lens taken from the stone False Ducks Lighthouse before it was demolished. The tower, which was dedicated on September 17, 1967 as a memorial to over one hundred sailors from Prince Edward County who had lost their lives at sea, is now part of Mariners Park Museum.

Lightkeeping came to an end on Swetman Island in 1965 with the establishment of the hexagonal tower.

In 2013, Hastings Prince Edward Land Trust applied to take ownership of the lighthouse.

For a larger map of False Ducks Lighthouse, click the lighthouse in the above map.

False Ducks Lighthouse is best seen by boat, but can be seen in the distance from Prince Edward Point Lighthouse.