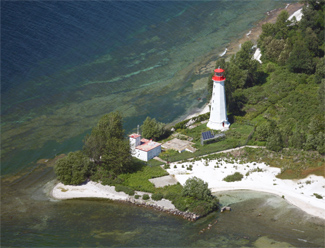 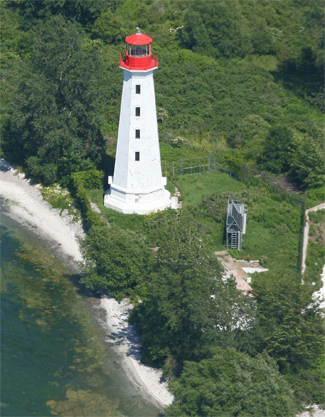 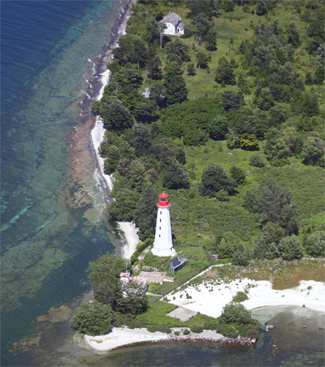 The Lake Carriers Association proposed a light and fog signal on the western end of Main Duck Island in 1908, and the Lake Ontario Coal Carriers Association soon joined the cause. In 1910, the Lighthouse Board of Canada recommended that the light on the False Ducks be moved to Main Duck Island, as deep-draft vessels passing through Lake Ontario would need to keep over well towards the Main Duck, due to the discovery of more shoal between the False Ducks and Main Duck than indicated on existing charts.

In 1913, A.T.C. McMaster of Toronto began work on a lighthouse, double dwelling, boathouse, oil shed, and wharf on Main Duck Island, and the project was completed in September 1914. The following description of the lighthouse was published by the Lake Carriers Association:

The lighthouse is an octagonal tower with sloping sides. It is of reinforced concrete construction, having a height of 80 feet from its base to the vane of the lantern, and supports a polygonal iron lantern with red roof. The light is of the third dioptric type of 100,000 candlepower, is displayed at an elevation of 74 feet, and shows one bright flash every 10 seconds. Petroleum vapor, burned under an incandescent mantle serves as illuminant. The light station is in latitude north 43 degrees 55 minutes 52 seconds, longitude west 76 degrees 38 minutes 19 seconds, and the light is visible 14 miles from all points of approach by water.

A fog alarm was added to the station in 1915, when a building was constructed at the waters edge in front of the lighthouse to house a type F diaphone, fed by air compressed by an oil engine. The diaphone sounded a group of two blasts every forty-five seconds. Rising water soon threatened the fog alarm building, prompting the construction of a breakwater in 1916.

James Clark was appointed first keeper of the lighthouse, but he was replaced after just a year by Fred Bongard, who spent six years on the island.

On the afternoon of November 16, 1920, Captain Harry Randall sought shelter for his steambarge John Randall in the bay at Main Duck Island while en route from Oswego, New York to Belleville, Ontario with a cargo of coal. During the night, the wind shifted from northeast to east, bringing heavy seas into the bay. The John Randall broke loose from her mooring and was carried out into the lake where it struck a flat rock and broke in two. As the lifeboats had been washed away, the four men waited for help to come before worsening conditions forced them to strap on lifebelts and attempt to swim to the island on the afternoon of the seventeenth.

Just as the men reached shore, Keeper Bongards wife and son happened along and offered what assistance they could. We were forced to walk a mile and a half across to the lighthouse, recalled Captain Randall. John OGrady, the engineer, and Harry smith were almost frozen up. The exposure was really terrible. On arriving at the lighthouse we were given a treatment of rum, and to this drink of liquor Harry Smith attributes the saving of his life.

The men were cared for by Keeper Bongard and his family for over a week before conditions allowed Keeper Bongard to take the men by boat to South Bay in Prince Edward County. News of the mens arrival was received with rejoicing and widely publicized as they had been given up for lost. A magician named Marjah, who was performing at the opera house in Kingston, had been asked repeatedly about the fate of the Randalls crew, and each time he said the vessel was at the Ducks and the crew was safe. Though his answers were ridiculed when a search of the area failed to find the vessel, he turned out to be correct.

Main Duck Island and Yorkshire Island, its smaller neighbor, are together known as the Main Duck Islands, and in the late 1800s fishermen from Prince Edward County inhabited the islands to be closer to rich fishing grounds. Claude W. Cole purchased the islands in 1905 for $1,200, but he allowed more than seventy fishermen to live on the island during the navigation season. Known as the king of the islands, Cole raised horses, sheep, cattle, and even bison on the island, but the latter were quickly shot after they gored the valuable cattle. When asked if Cole wouldnt rather live in a city, he replied: No, not I. Its fine to visit but folks only exist there. They dont really live. An island is where a mans soul may breathe.

When the government wanted to build a lighthouse on Main Duck Island, Cole gave up the needed land and a right-of-way to it in exchange for the government building a dock. John Foster Dulles, who attended public schools in Watertown, New York and later served as Secretary of State from 1953 to 1959 under President Eisenhower, purchased the Main Duck Islands from Coles widow in 1941. Dulles and his wife Janet would fly to the island several times a year in an amphibian plane and enjoy the privacy of their small, one-room cabin, which didnt have electricity. The couple enjoyed hauling water, chopping wood, and cooking the fish they caught in the lake. In case of emergency, Dulles could be reached via the wireless station at the islands lighthouse.

A radiobeacon was established on Main Duck Island in 1929 to help mariners determine their position on Lake Ontario. During thick or fog weather, the radiobeacon operated continuously. Otherwise, it would broadcast its call signal of UGD just four minutes and fifteen seconds each hour. In 1950, the stations fog alarm was synchronized with its radiobeacon, which allowed mariners to determine their distance from the station in miles by counting the number of seconds between receiving the radio signal and hearing the fog alarm and dividing this number by five.

Dulles died of cancer in 1959, and five years later, Robert F. Hart, who sailed on Lake Ontario with Dulles and managed the islands for him, purchased the Main Duck Islands from the Dulles estate for an undisclosed sum. Parks Canada acquired the Main Duck Islands in 1977, and in 1998 they were incorporated into St. Lawrence Islands National Park. This move fulfilled the dream of Dulles who always wanted the islands to be a sanctuary for birds and animals.

Ken McConnell, the last keeper of the lighthouse before it was automated and de-staffed in 1978, had a harrowing experience reaching the station one December. He set off from Long Point Harbour in Prince Edward County at three in the afternoon and was making good progress in his thirty-two-foot boat when the engine died. The area around the Main Duck Islands is often called the graveyard of the Great Lakes, and McConnell was in danger of becoming another casualty.

That wind got up to 55 miles an hour, McConnell remembered. I got down in the hold changing filters and hanging on. Id get her started and head up into the wind and she'd quit again. This went on and on. I got fairly close to the island, trying to get help but they didn't see me. By now the seas were about 15 feet high. Finally fishermen Rory McIntosh and Ray Lancaster spotted me and tried to get a line on. By then it was about two in the morning.

Suddenly, McConnell was blinded by the spotlight of the 730-foot freighter Whitefish Bay upbound in the violent seas. I hollered to Ray, Give er the devil! said McConnell. They did. Got me out of the way just as I read the big name way up on her bow. I thought we had it!

Keeper McConnell was at the station when the light was kerosene and weights had to be cranked up to revolve the lens, but electricity changed all that and soon eliminated the need for resident keepers.

For a larger map of Main Duck Island Lighthouse, click the lighthouse in the above map.