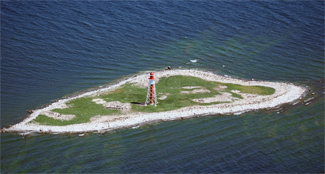 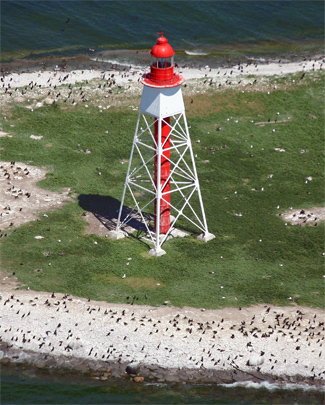 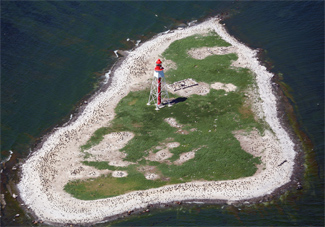 Tiny Pigeon Island, located off the western end of the much larger Wolfe Island, presented a significant danger to mariners along with the nearby Charity Shoals. On November 17, 1868, the Kingston Daily News printed the following item calling for a lighthouse on Pigeon Island:

The Charity Shoals - These shoals, on which the schooner S. Richardson struck yesterday, situated a little east of Pigeon Island, are much dreaded by the mariners of the lakes, who are constantly complaining that no light has been yet placed as a beacon upon the island. Every year a vessel or two is lost there, while very many touch upon portions of the shoal which in their present unmarked state it is difficult to avoid, and receive more or less damage. A light upon the desired point would nearly complete the necessary chain of beacons of the shoals and islands of the entrance to the harbor of Kingston and the St. Lawrence, and make plain the passage from the lake outside.

Convinced of the need for a lighthouse on Pigeon Island, the Department of Marine had a church-like lighthouse built in 1870 consisting of a rectangular, one-and-a-half-storey keepers dwelling with a square tower rising from one end of its pitched roof to a height of forty-one feet. The department published the following information on the new lighthouse at the close of the 1870 season:

A new lighthouse, with keepers dwelling attached, was erected lately on Pigeon Island, near Wolfe Island, in Lake Ontario. It shews a white revolving light, is elevated 46 feet above the level of the water, and can be seen a distance of from 12 to 16 miles in clear weather. It was lighted tor the first time on the 1st November, 1870. The importance of this light can scarcely be over-estimated in guiding the mail and other steamers and lake craft into Kingston, and to the entrance of the River St. Lawrence. Reports have reached the Department of the satisfaction which its establishment has given to the shipping trading in that locality.

Parliament had provided $2,000 for the lighthouse, but the actual cost came to $2,405.72, with most of the overrun attributed to the fact that a revolving light, with the necessary machinery, was used instead of the initially proposed fixed light. The lighting apparatus consisted of two circular-burner lamps and two eighteen-inch reflectors that revolved to produce a white flash every seventy seconds.

James Eccles was appointed first keeper of the light at an annual salary of $300. On September 4, 1871, Keeper Eccles was on the mainland transacting some business, having left the light in charge of his son and another person who apparently did not understand the management of the lamps. During the night, the lamps took fire, and candles had to be used in their place to produce a much more feeble light until a new lamps could be obtained.

The Royal Mail Line steamer Spartan, en route to Kingston from Oswego, New York on the night of September 5, 1871, saw a small glimmer of a light from the direction of Pigeon Island, making it seem like the island was still far off. When the water started to shoal, the captain reduced speed, but it was too late, and the vessel ran aground on Pigeon Island. The Spartans captain attributed the accident to the deceptive light being shown from Pigeon Island, but several passengers on deck at the time of the grounding, wondered why the Captain was steering straight toward a light that was clearly vessel. The steamers passengers were transported to Kingston aboard the schooner Gazelle, and the Spartan was later freed from the island.

Eccles resigned as keeper on March 5, 1872, and forty-year-old James William Davis was placed in charge of the light before the opening of the 1872 navigation season. James Davis and his wife Mary had ten or eleven children, and the youngest of them were raised on the island.

In its report for 1873, the Department of Marine reported another sad accident involving one of its keepers:

While proceeding from his lighthouse, at Pigeon Island, in Lake Ontario, to Wolfe Island, on the 4th November last. Mr. Davis, the keeper of Pigeon Island lighthouse, was, with five others, unfortunately drowned on that occasion, and it is supposed that the boat in which they were, either swamped or upset during a gale of wind, as none of the parties were saved. The light has been placed in temporary charge of his son, who has been well recommended for the situation, and on whom the widow and a large family of children are depending for support.

Ambrose Davis, the seventeen-year-old son of James and Mary Davis, was appointed keeper of the lighthouse in his fathers stead and served in this capacity until 1878. Mary Davis was listed in the Department of Marines reports as the official keeper from 1878 to 1884, after which Richard Davis took charge of the light.

Richard Davis kept the light until 1896, when John H. Davis, his son, took over. During John H. Davis tenure, the following change took place in 1908:

The old combined lighthouse and dwelling was pulled down and replaced by a specially designed 4-section steel skeleton tower, and a separate dwelling. The new tower is square in plan, with sloping sides, surmounted by an inclosed wooden watchroom, and has a spiral staircase, inclosed in cylindrical steel form, constructed from base of tower to watchroom floor. The new dwelling house is a neat wooden building. A new boathouse was also built, as well as cribwork protection work. The steel tower was purchased from the Gould, Shapley & Muir Co., of Brantford, Ont., for $1,677, and the construction work was carried out by days labour at a cost of $3,591.84.

Pigeon Island Lighthouse was made unwatched in 1957 after the hand-operated fog signal was discontinued and the characteristic of the light was slightly altered to give two flashes every six seconds instead of every five seconds. Today, a white flash is exhibited every four seconds from the islands 1908 steel tower.

For a larger map of Pigeon Island Lighthouse, click the lighthouse in the above map.