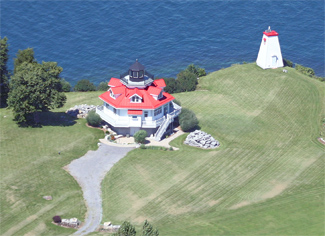 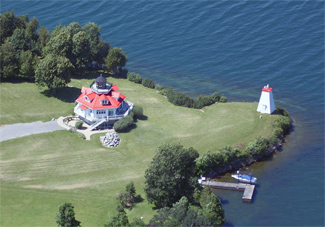 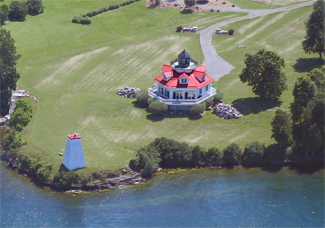 Wolfe Island, the largest of the Thousand Islands, lies between Kingston, Ontario and Cape Vincent, New York at the confluence of Lake Ontario and the St. Lawrence River. The islands eastern tip, known variously as East Point, Hemlock Point, and Quebec Head, was considered as a site for a lighthouse as early as 1856, when the Commissioners of Public Works for the Province of Canada noted: It is proposed to remove the framed light-house now standing on Fiddlers Elbow to Hemlock Point on Wolf Island, about midway between Gananoque and Kingston, a recommendation to that effect having been made by the captains of the steamers generally. The General Report of the Commissioners of Public Works for 1852-1853 noted that lights had recently been established at Grenadier Island, Fiddlers Elbow, Lindoe Island, Gananoque Narrows, Jack Straw Shoal, Spectacle Shoal, Red Horse Rock, and Burnt Island, permitting the mail boats to operate at night between Brockville and Kingston. Keepers were listed for Fiddlers Elbow Lighthouse through 1857, so the light was likely deactivated that season. The lighthouse on the eastern tip of Wolfe Island was not established until October 25, 1861, so it is not clear whether the tower from Fiddlers Elbow was acutally moved to Wolfe Island or not, but it likely was.

Thomas Kilty and Robert Gillespie were both listed as keepers of Wolfe Island Lighthouse in 1862 and 1863, but after this time, which coincides with the construction of a keepers dwelling on the point, Robert Gillespie was listed as the sole keeper up until he was superannuated in 1885 and replaced by his son William.

The following description of Wolfe Island Lighthouse was provided by Darius Smith, Superintendent of Lights above Montreal, after a visit in 1877:

The lighthouse is placed on Quebec Point, and is a square white building, containing a fixed catoptric light, 36 feet high. The light consists of three No. 1 flat wick lamps, with three 15-inch reflectors. The lantern is of iron, six feet in diameter; size of glass, 15 x 12 inches. Mr. Robert Gillespie, the Keeper, has four children, and he keeps his light in good order. The lighthouse requires painting. Eight new window sashes are required for the dwelling, of 20 lights each; size of glass, 7x9 inches. The Keeper was ordered to procure the same.

In August 1882, Robert Gillespie asked a local paper to print the following notice in an apparent attempt to block anyone from petitioning for his job: Mr. Gillespie, lighthouse keeper, foot of Wolfe Island, desires us to state that he is not dead, and the fact of his presence in this office certainly did give the report of his demise a quietus. The petition of a candidate for his position will, therefore, be of no avail. Mr. Gillespie is as well and active as he was 16 years ago.

The following tribute to Robert Gillespie was published in Kingstons British Whig on June 11, 1887, two days after his death and two years after he retired as keeper of the lighthouse:

Robert Gillespie, who, for a quarter of a century, had been in charge of the lighthouse at Port Metcalfe, foot of Wolfe Island, died on Thursday, aged 83 years. He was a brother of John Gillespie, Pittsburg, and leaves a widow and seven children. He emigrated to Canada in 1840, and previous to his appointment as lighthouse keeper was a farmer. For some time he suffered from rheumatism, and so severely that he could not walk. He was highly respected by all who knew him.

During William Gillespies tenure as keeper, which spanned over fifty years, a thirty-three-foot standard wooden tower was erected on the point in 1911, replacing its worn-out predecessor. Lightkeeping was likely considered as a secondary source of income for William Gillespie as in various census records his occupation is listed as farmer. Prior to succeeding his father as keeper, William served as the custom house officer for Port Metcalfe.

Wolfe Island Lighthouse remains active today, though its lantern room has been removed. A replica of Thomas Point Shoal Lighthouse was built near the decapitated tower as a private residence, while the original keepers dwelling reportedly remains standing farther away.

For a larger map of Wolfe Island (Québec Head) Lighthouse, click the lighthouse in the above map.

Wolfe Island Lighthouse is best seen by boat as the road/path leading to the lighthouse are private.