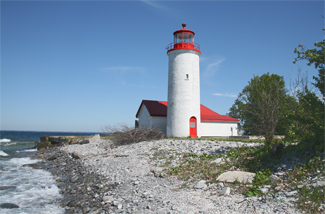 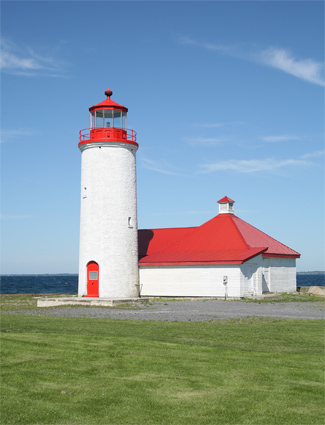 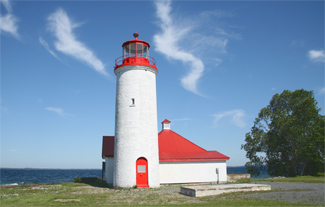 In 1792, just months after Quebec was divided into the provinces of Upper Canada and Lower Canada, John Graves Simcoe, the first Lieutenant Governor of Upper Canada, named the islands in the archipelago at the entrance to the St. Lawrence River after important British military personnel involved in the Seven Years War. Simcoe named the largest island Wolfe Island in honour of Major General James Wolfe, who fell in the Battle of the Plains of Abraham, and he called the surrounding islands Amherst Island, Howe Island, Carleton Island, and Gage Island.

Gage Island, known more commonly now as Simcoe Island, lies just off the northwest tip of Wolfe Island near Kingston. In 1803, the Parliament of Upper Canada authorized the construction of the provinces first three lighthouse, described as being necessary and essential to the safety of vessels, at Simcoe Island, Gibraltar Point near present-day Toronto, and Mississauga Point at the mouth of the Niagara River. The lighthouses at Gibraltar Point and Mississauga Point were finished respectively in 1808 and 1804, but more than three decades would pass before the third lighthouse was built.

In January 1833, the petition of Robert Hamilton and eight other masters and owners of vessels navigating Lake Ontario praying for the erection of a lighthouse on the western tip of the island was read in the Parliament of the Province of Upper Canada. Parliament responded quickly to this petition, passing an act on February 13, 1833 entitled An Act granting a Sum of Money to defray the expense of erecting a Light-House on Nine Mile Point, at the entrance of the Harbour Kingston that provided £750 for the lighthouse and appointed three commissioners to superintend its erection. Nine Mile Point was so named because it was approximately nine miles southwest of Kingston.

Charles W. Grant, the owner of Gage Island, donated five acres at Nine Mile Point, and contracts related to the lighthouse were awarded to the same people who had contributed to Point Petre Lighthouse the previous year. Robert Matthews was contracted to build a circular stone tower for £317, while Thomas Masson was to provide the lantern room for £170 and Winslow Lewis was to supply the lamps, reflectors, chandelier, wicks, glass panes and other necessities for $558.07. An unexpended balance of £5 was returned to the receiver general after all accounts for the lighthouse had been paid.

When completed, Nine Mile Point Lighthouse stood forty feet tall and was equipped with eleven lamps and reflectors that produced a fixed white light. Thomas Sparham was appointed the first keeper of the lighthouse, but no dwelling had been built for his convenience. The sum of £150 was finally granted in February 1837 to erect a dwelling house on the Nine Mile Point, near Kingston, for the use of the Keeper of the Light House at that place.

In 1873, a 1,000-pound fog bell, tolled by clockwork machinery, was placed in operation at Nine Mile Point Lighthouse. The bell, machinery, and tower cost $1,273.62. Albert Dunlop, who was keeper at the time, was responsible for winding up the bells weights and activating the bell during foggy weather and snowstorms.

Darius Smith, the Superintendent of Lighthouses for the district above Montreal, visited Nine Mile Point in 1878 and filed the following report:

Arrived here at 3.30 p.m., July 4th, and inspected the Station and supplied oil and other stores. It is a white circular stone tower, 40 feet from base to vane in height, having an iron lantern 8 feet in diameter; it has seven mammoth flat-wick lamps, with 18-inch reflectors, and should be seen a distance of 15 miles. It shows a white fixed catoptric light. Size of glass at the lantern is 12 x 14 1/2 inches. This light is much obstructed by the smallness of the glass.

The breakwater for the protection of the lighthouse is in a very poor condition, and fast going to decay; 200 cords of stone are required for the breakwater. Mr. Dunlop, the keeper, was instructed to procure material to fence the property of the Government. Mr. Dunlop will do the work.

This Station is exceedingly well kept. The family number six.

The schooner Jessie H. Breck, bound from Port Dalhousie to Kingston with a load of oak timbers, foundered in heavy seas off Nine Mile Point on May 17, 1890, when one of its ports blew open letting in a stream of water four feet square. Keeper Dunlop and his wife had the best vantage point for viewing the shipwreck and supplied the information carried in Kingstons British Whig:

Four men were pumping as hard as they could and there was one man at the mainsail, and another at the jib, besides a man at the wheel. Mr. DUNLOP could see them very plain. While he was looking at her the mainsail dropped and the vessel went under like a stone. He kept a lookout for her but she did not come up for about a minute and a half. When she did come up she was on her side. Mr. DUNLOP thinks that there must have been a leak in the vessel as the men were working very hard at the pumps.

The vessel disappeared from sight but a minute or so and then came to the surface. Three men ran along the side towards the cabin of the boat and the man in the rigging kept waving his hat to those on shore. They held bravely on for fully three quarters of an hour then began to be washed off one at a time, the man in the rigging being the last to disappear.

Stanford Eves penned the Ballad of Nine Mile Point to remember the loss of the crew of the Jessie H. Breck:

The Jessie Breck, with timber on deck
Capsized in a summer squall
The Captain and all the crew were lost
The waters claimed them all
It was eighteen ninety in the month of May
When normally peaceful waters play.

In 1892, the Department of Marine decided to establish a steam foghorn at Nine Mile Point in place of the stations fog bell. After tenders were invited, a contract was awarded to William Ashe of Ottawa who erected a building and fitted it up with two boilers and foghorn machines supplied by Messrs. Carrière, Laine & Company of Lévis, Quebec. The square fog alarm building was built northwest of the lighthouse, and the foghorns, which pointed to the southwest at an elevation of sixteen feet above the lake, sounded an eight-second blast every thirty seconds as needed. The fog alarm cost $3.733.33 and was placed in operation in the spring of 1894.

An addition was built onto the southwest side of the fog alarm building in 1904 to facilitate the installation of a diaphone fog alarm, which was placed in operation at the opening of navigation in 1905 and sounded a seven-second blast each minute. In 1908, the fog alarm building was altered to accommodate an additional twenty-five-horsepower Robb-Mumford boiler, and a reinforced concrete chimney was erected.

George Eves, who was an assistant for six years at Nine Mile Point starting in the late 1930s, earned twenty dollars a month to help see that the light was lit each night and that the horn sounded when needed. The biggest trouble at night was keeping occupied to watch the weather, to stay awake, Eves recalled. I read a lot. I read pretty well the library up there at the lighthouse there, a good many books. There was supposed to have been five hundred books  but there wasnt quite that many. I remember one book I read there that always intrigued me was called Silver Shoal Light and it was about a lighthouse in the States. Actually, it was supposed to have been a partially true story. 

Robert Corcoran, the last keeper of Nine Mile Point Lighthouse, retired in 1987. The lighthouse remains active, flashing a white light every ten seconds, but the stations foghorn was silenced in 1991, and the following year the two nearby keepers dwellings, built in the 1950s, were sold off.

Nine Mile Point Lighthouse was declared a Recognized Federal Heritage Building in 1989, and after passage of the Heritage Lighthouse Protection in May 2010, it became available to organizations or individuals willing to maintain it.

A group of area residents formed The Nine Mile Point Lighthouse Preservation Society to save the lighthouse from neglect or a transfer of ownership that could endanger it. Our first preference was for the government of Canada to transfer it to Parks Canada, which already owns and maintains a number of historic Canadian lighthouses, said Yelda Miedema, chair of the preservation society. Our second choice was for the township to be the owners. Since neither of those seem willing to take it on, we were left with little choice but to incorporate, and apply for ownership in order to ensure the preservation of the lighthouse, as well as ensure that it remains Canadian-owned and accessible to Canadians."

For a larger map of Nine Mile Point Lighthouse, click the lighthouse in the above map.