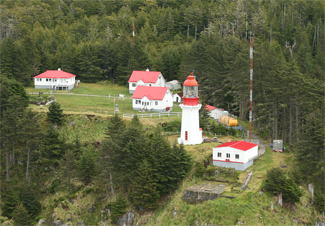 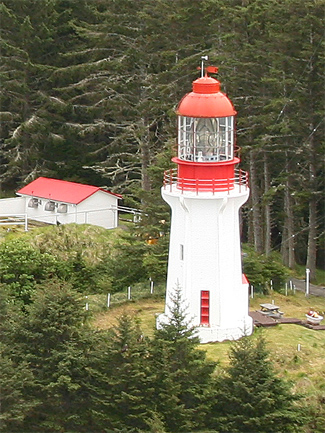 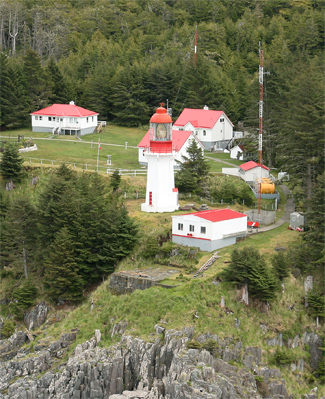 Haida Gwaii, Islands of the [Haida] People, is an archipelago off the northern coast of British Columbia that consists of two main islands, Graham Island to the north and Moresby Island to the south, surrounded by roughly 150 smaller islands. Formerly known as the Queen Charlotte Islands, the archipelago was renamed Haida Gwaii as part of the Haida Gwaii Reconciliation Act of June 3, 2010. The islands are separated from the mainland by Hecate Strait, while Vancouver Islands lies to the south, across Queen Charlotte Sound, and Alaska lies to the north, on the other side of Dixon Entrance.

The Grand Trunk Pacific Railway (GTPR) was conceived in 1903 as the western portion of a second Canadian transcontinental railway that would serve the northern portion of the provinces. Prince Rupert, the railways western terminus, had the advantage of being closer to Asia than the Canadian Pacific Railways hub in Vancouver. Construction of the GTPR began in 1905, and the last spike was driven on April 7, 1914.

Anticipating the completion of the railway, the Department of Marine recognized that a major landfall light was needed on the northern end of Haida Gwaii to mark Dixon Entrance, a direct route to Prince Rupert from the Pacific Ocean. Commander Frederick Learmonth sailed north aboard the Egeria to select sites for navigational aids along Dixon Entrance and recommended the principal light be constructed atop the highest spot on Langara Island, the northernmost island of Haida Gwaii. Lieutenant Jacinto Caamano, commander of the Spanish corvette Aranzazu, named the island in 1792 after Admiral Juan de Lángara of the Spanish Navy.

William P. Anderson, chief engineer of the Department of Marine, decided that the islands 523-foot summit would be far too high in view of the prevalence of fog on all that coast, so instead he selected a plateau atop Langara Point, on the island's north shore, for the lighthouse and fog signal.

After five acres of timber were cleared, work began in 1912 on a thirty-foot, hexagonal tower, a double dwelling, and a 2,200-foot-long tramway that would lead down to a boathouse situated on a sheltered bight. Built of reinforced concrete, the tower was supported by six buttresses, a familiar feature in Andersons designs. To equip the station, a first-order single flashing light was procured from Chance Brothers for $14,225.27, and a class E fog alarm plant was provided by the Canadian Fog Signal Company of Toronto for $10,200.93. R. Chrystal and D. McLean supervised the day labourers, who completed the station at a cost of $64,585.44, exclusive of the lighting apparatus and fog signal equipment.

Anderson was enraged when he learned that 108.00 worth of fancy butter and such articles as blueberries, canned pumpkin, assorted jams, [and] Australia roast mutton, had been sent out to Langara Island to feed the workers. Another point of contention was a bill for horse fodder. Supplies could only be landed in the cove below the station in perfect conditions, so horses were needed to pull supplies over a mile-long corduroy road from a more protected landing. The Marine Agent in Victoria assured Anderson that the cost of horse feed would be much less than having a steamer wait offshore for days on end in order to offload supplies near the lighthouse.

After four years at Egg Island Lighthouse, James Forsyth arrived at Langara Point on September 9, 1913 with his wife Ellen and daughter Evelyn. The Estevan would visit the station every six months to drop off supplies along with a backlog of newspapers. The bales of papers were drug into the parlour, where Keeper Forsyth cut the twine and quickly caught up on the war effort. Evelyn later remembered, After we came up for air and got the latest news, Dad used to have us go through them methodically and stack them week by week and we would work our way through them.

To facilitate deliveries at the station, a derrick was installed in 1915, and an aerial tramway was constructed in 1917.

Feeling his teenage daughter needed to be closer to civilization, Keeper Forsyth asked for a transfer in 1918. His timing was perfect, as the head keeper of Race Rocks retired later that year.

A new building was erected at Langara Point in 1929 to house machinery for a radiobeacon, and during World War II, a radar station was established. Accompanied by his wife and two daughters, William Kinnear served as head keeper at Langara for two years during World War II. Norma, one of the daughters, later recalled that the family went to Langara after the government took their house and land for back taxes. When the Kinnears arrived at the station, all the buildings were white and red, but it wasnt long before everything was painted a drab camouflage jungle green. For entertainment, Norma and her sister would walk the plank road to the RCAF canteen, where they listened to the jukebox or watched movies.

Ed Hartt arrived at Langara Island in 1957, after having served at three other northern lighthouses: Lawyer Island, Barrett Rock, and Triple Island. It must have been nice to have some room land to walk around on after having been confined on Triple Island, but during their first night at Langara, the Hartts discovered one drawback of life at Langara: rats. The rats on Langara were a piebald subspecies that were somehow introduced to the island around World War II. Each night, traps set by the keepers would snap shut on eight or so unsuspecting rats, and during one week, Keeper Hartt dispatched fifty-nine of the varmints with his revolver.

Besides annoying the keepers, the rats eventually forced five species of burrow-nesting seabirds to abandon the island, and the number of nesting pairs of the one remaining species fell from 200,000 to 14,600. In 1995, a ground-based eradication program was deployed using 4,000 bait stations that were checked and replenished every two days. In less than four weeks, Langaras rat population was eliminated, and subsequent studies have shown a steady increase in nesting seabirds.

Jeannie Hartt fondly remembered the six years she spent at Langara Point. Her father built her a wooden rowboat, which she would often take out in the stations landing cove to cut the heads off the long strands of kelp so they wouldnt get tangled in the workboats propeller. Supply day was highly anticipated as it afforded a chance to see new faces and receive clothes, treats, and a traveling library box. We could hardly wait for my parents to open it up so we could voraciously read every book in the box, Jeannie recalls. There were adults books as well as childrens. Once we had read the childrens books we started on the grownup books. Adventures, novels, biographies, we read it all. The smell of new books is one that I never forgot.

In December 1997, Santa Claus used his alternate red sleigh, a Coast Guard Sikorski helicopter, to visit thirteen-year-old Guthrie Schweers at Langara Point. Born while his parents were stationed on Ivory Island, Guthrie had lived his entire life at a lighthouse and looked forward to the annual holiday visit. After showing Santa his eight goats, pet deer, and flock of chickens, Guthrie accompanied his visitor up into the lighthouse for a photo opportunity inside the massive Fresnel lens. Guthrie earned money selling eggs to Queen Charlotte Islanders and had just raised his price fifty cents to $1.75 a dozen, not because he wanted to but because his customers demanded it.

A single dwelling was built at Langara Point in 1959, and at some point the duplex was torn down. Today, three single dwellings are situated in the clearing south of Langara Point Lighthouse, whose Fresnel lens continues to send out a bright, white flash once every five seconds.

For a larger map of Langara Point Lighthouse, click the lighthouse in the above map.

It is not easy to get to Langara Point. I took a flight out to Massett, and then chartered a plane to fly me over the lighthouse. If you enjoy fishing, you might be able to enjoy a trip to Langara Point Lighthouse while staying on the island with Langara Fishing Adventures.