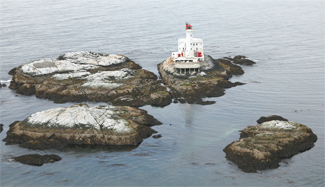 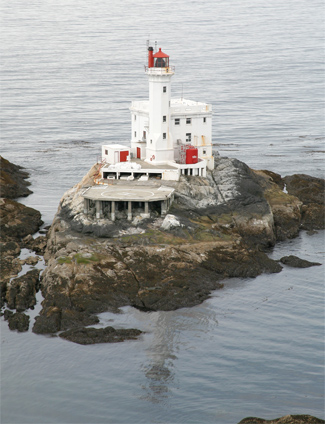 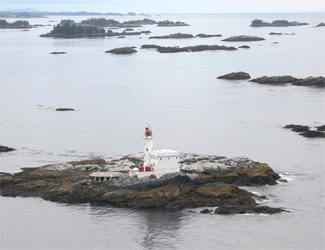 Brown Passage lies twenty-eight kilometres west of Prince Rupert and is bounded by Dundas Islands to the north and the Tree Nob Group of islets and rocks, which cover an area of fifteen square miles, to the south. In 1913, an acetylene beacon on a concrete base was established on Triple Islands, a trio of forty-foot-high, white rocks situated at the northwestern end of the Tree Nob Group, to guide mariners through Brown Passage. Prior to this, the preferred but lengthier route for reaching Prince Rupert from the Pacific Ocean was to follow Dixon Entrance and then use the lights on Green Island and Lucy Island to sail south. While making its way from Masset to Prince Rupert through Brown Passage on August 18, 1914, the Grand Trunk Pacific steamer Prince Albert ran aground on Butterworth Rocks, three miles southwest of Triple Islands, in a dense fog. Passengers and crew were put off in lifeboats and picked up by the Prince John, but during the transfer a baby fell overboard and drowned.

This wreck convinced the Department of Marine that a lighthouse and fog alarm were needed in Brown Passage, and the following April, Colonel William P. Anderson, the chief engineer of the department visited Brown Passage and selected Triples Islands as the site for one of his reinforced-concrete lighthouses.

A $33,500 contract was awarded to J.H. Hilditch, and work on the square, two-story lighthouse with a tower built into one of its corners commenced in August 1919. The northwesterly rock of the Triple Islands was selected as the site for the lighthouse, and a bunkhouse/cookhouse was built on another rock and linked to the site with a bridge. As the tide permitted, the workers blasted off the top of the rock, and then began filling forms with concrete.

The site had to be abandoned in the latter part of November 1919 due to inclement weather, but the crew returned the following year and resumed work on the lighthouse, whose basement and first floor were dedicated to storage and space for the engines, compressors, and air tanks needed for the fog alarm. The top floor had three bedrooms were built along the south wall and a kitchen, pantry, and storeroom on the north side.

Work wrapped up in December 1920, and around January 1, 1921 a third-order Fresnel lens started showing a double flash every eight seconds. When necessary, the diaphone fog alarm joined in with a four-second blast every thirty seconds.

Thomas Watkins transferred up from Sisters Islets Lighthouse with his wife and two daughters to take charge of the station. After two years at Triple Islands, Watkins contracted pneumonia and passed away on January 31, 1923. Trapped on the tiny islet, Mrs. Watkins and her daughters had no choice but to drag Keeper Watkins body up on the roof, where the freezing weather would preserve it, and then mind the light and fog alarm as duty dictated. Unable to get the attention of any passing vessels, Mrs. Watkins tended the light for twenty days before the lighthouse tender finally called.

Tom Moran arrived on Triple Islands as an assistant keeper in 1927 accompanied by Sophie his wife and a two-month-old son. On November 22, 1929, Sophie got too close to a spinning flywheel in the lower floor of the lighthouse, and it caught hold of her clothing and pulled her into its whirling parts. I was right there and shut if off, Tom recalled, but terrible screams, terrible screams, terrible screams Tom nursed Sophie as best as he could with the materials on hand until the tender Alberni arrived a week later to take Sophie to Prince Rupert. The Albernis captain promised to send an update on Sophies condition by commercial radio within twenty-four hours, but due to deteriorating conditions the Alberni had to put up at a fishing camp.

After listening attentively to the radio for hours on end, Tom decided to get a firsthand report on his wifes condition and set off for Prince Rupert in the stations boat. The small vessel proved no match to the tempest-tossed seas, and Moran was blown north to Green Island, where his father was serving as keeper. From Green Island, he caught a ride aboard a fishing packer to Prince Rupert. Sophie slowly recovered from her injuries and eventually returned to Triple Island. In the mean time, Tom filled out a workmens compensation from along with a report on the accident, but he was soon informed that the claim was not payable as his wife was not a government employee.

Gordon Odlum grew up in Vancouver and during an outing one day he hiked to Point Atkinson Lighthouse, where Keeper Thomas Grafton kindly gave him a tour. Odlum was captivated by the life of a lighthouse keeper, and after frequent visits out to Capilano Lighthouse, he decided to become a keeper himself. After brief assignments at numerous lighthouses, Odlum was transferred to Triple Islands Lighthouse in November 1942. He seemed to made for the work, as a year later, he wrote home, I think I can truthfully say that I havent felt at all lonesome, partly I guess because Im built this way

He must have felt at least a bit lonesome as he decided to bake a tiny loaf of bread and send it to an attractive girl that worked at the Glass Bakery in downtown Vancouver. Not having her home address, he sent the package to the bakery and then eagerly waited a reply. A response arrived in December 1943, a true Christmas gift, and Odlum wasted no time in writing back. It was sweet of you to remember little old shabby lightkeeping me. It seems such a long time since I had the pleasure of going into Glass Bakery and saying Hello. Two whites please to your sunny smile. Fifteen months it has been since I have been ashore. I wonder if you might be married and have four children by now?

A seven-month-long courtship by mail followed, and the couple married on September 20, 1944 in Vancouver. After a short honeymoon, the Odlums headed north to Triple Islands. While Gordon was gradually introduced to the remote lifestyle of a lightkeeper, eighteen-year-old Jean was plucked from Vancouver and planted on the most remote and confining station in British Columbia. Many a sailor bet the pretty, young girl wouldnt last a year on the Rock, but she did, and it wasnt until eight years later, in 1952, that the couple was transferred to a station a bit closer to humanity  Race Rocks. After nearly a decade there, Keeper Odlum lucked out and got Point Atkinson, where he was first introduced to lighthouse keeping.

In 1954, Ed and Eileen Hartt moved their family from Lawyer Island to Triple Islands, where one of the conveniences they had was a combination washing machine/spin dryer. Despite its well-worn casters, Eileen recalls that the machine lurched and charged about the room like a dog on a leash. One night Don, the assistant keeper, reported that the clockwork mechanism for rotating the lens wasnt working properly, and it was soon discovered that the pulleys through which they weight cable passed were so worn out they were binding.

Ed, Eileen, and Don each spent time a few hours that night manually revolving the lens, which turned on a bed of mercury. When Eileen awoke the following morning, she discovered her washing machine had disappeared  it had been sacrificed to build an electric drive to turn the lens. Ed figured being able to sleep through a night outweighed the inconvenience of doing the wash by hand, and his invention was soon adopted and deployed at other stations.

The Hartts were the last family to call Triple Islands home, as when they left in 1957, four keepers were assigned to staff the light in rotating, month-long shifts. Having families at the lighthouse might have helped maintain a sense of normalcy at the station, something that was definitely lacking two years later.

In March 1959, an inquest into the death of thirty-two-year-old Remite Erneste Vargas, a Guatemalan who had been in Canada for three years, was held at Prince Rupert. Keeper L.M. Clifford told the jury how for four sleepless days he had lived with a crazed Vargas bent on suicide, and when he finally fell asleep from exhaustion, he was awakened by gunshot  Vargas had taken his own life with a .30-.30 rifle.

On February 28, Clifford informed the Department of Transport that Vargas had become mental and was bleeding from the nose, but no action was taken until March 3, when Clifford radioed that Vargas had attempted to take his life with an eight-pound sledge-hammer. A lighthouse tender was sent to Triple Islands with a RCMP constable aboard, but rough seas prevented it from landing anyone at the lighthouse for four days, the four sleepless days Clifford was forced to spend with a madman.

Clifford bandaged Vargas sledge-hammer wounds, but time and again the assistant would rip off the dressings and tear at the wounds. On March 7, Vargas found the gun and ammunition Clifford had hidden and ended his life. Coroner George Dawes agreed with the jury that stormy weather prevented help from reaching Triple Islands, but he added: I feel somebody has slipped up. Had preparations been made to answer Cliffords call for assistance immediately, Vargas might be here today.

After mercury was declared hazardous, the third-order lens at Triple Islands was deactivated in the 1990s, and a modern beacon was placed outside the lantern room to produce the stations characteristic double-flash. After surviving a few de-staffing attempts, Triple Islands retains its resident keepers, who now come and go every twenty-eight days by helicopter. Triple Islands also serves as a pilot boarding station, where any foreign ship over 350 gross registered tons is required to pick up a coasts pilot before proceeding into British Columbia waters.

For a larger map of Triple Islands Lighthouse, click the lighthouse in the above map.

Triple Islands Lighthouse is best seen by boat but may be viewed on a flight from Prince Rupert to Masset.