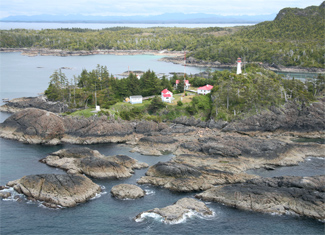 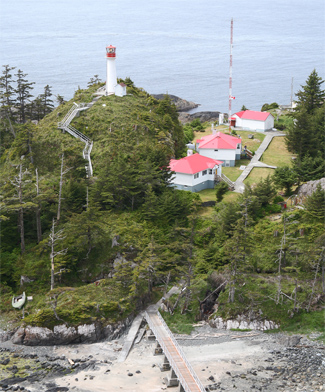 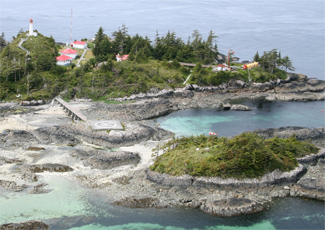 Wide and shallow Hecate Strait lies between Haida Gwaii, formerly known as the Queen Charlotte Islands, and the mainland of British Columbia, and with a length of roughly 260 kilometres in length, it stretches from Queen Charlotte Sound on the south to Dixon Entrance near the border with Alaska.

Due to its shallowness, Hecate Strait can quickly become rough during storms and violent weather. Most mariners traveling along this stretch of coast follow the Inside Passage, a circuitous but protected route that runs between the mainland and islands situated just offshore, but if they want to save time and fuel, Hecate Strait provides a more direct route.

Two-mile-long Bonilla Island is situated at an important turning point on the eastern side of Hecate Strait, nine kilometres off the much larger Banks Island, and is easily recognized by Dome Hill, its conspicuous, 232-metre-high summit, which serves as a landmark for mariners. One source states that in 1792 Spanish explorer Jacinto Caamaño named the island Bonilla, meaning somewhat high or big, because of Dome Hill.

In 1912, the Department of Marine spent roughly $500 as preliminary expenses in connection with the establishment of a lighthouse, dwelling, &c. on Bonilla Island. Work was supposed to have started the following year, but the project must have been cancelled as the first light was not placed on the island until 1927, when an unattended Aga beacon was established. This light was described as having a concrete base with a white mast that was surmounted by a white, wooden, slat-work ball and a red lantern.

A 1928 report noted that if ships could use Hecate Strait instead of the Inside Passage, the sailing route between Vancouver and Prince Rupert could be shortened by 100 miles, which would cut off nearly one fully days sailing, and materially reduce the expenses of the trip. The navigational aid most needed for this route was a lighthouse with a first-class fog signal on Bonilla Island.

In the 1950s, the British Columbia provincial government invited the Aluminum Company of Canada (Alcan) to construct an aluminum smelter in the Kitimat Valley, situated 146 kilometres northeast of Bonilla Island. Between 1951 and 1954, Alcan built a reservoir, a hydroelectric generating station, a deepwater port, and a townsite, to support the smelter in what was called the most expensive project ever attempted by private industry.

The increase in marine traffic generated by the Kitimat smelter was finally enough to prompt the construction of the last staffed lighthouse and fog signal in British Columbia. In 1959, Stange Construction Company built three single dwellings, a fog alarm building, light tower, and related facilities on an islet just off Bonilla Island at a cost of roughly $200,000.

First exhibited in 1960, the new light, a flashing white light with a red sector, was exhibited from a steel tower that had a focal plane of 127 thanks to the high ground on which it stood. A diaphone fog alarm sounded a blast every thirty seconds during periods of reduced visibility.

When asked what would motivate someone to become a lighthouse keeper at a place as remote as Bonilla Island, Jean Beaudet, who served as head keeper from 1979 to 1993, replied, The search for something fresh and worth living for and a natural inclination toward adventuremy wife and I found everything we longed for...hard work for a tangible reason, peace of mind and togetherness.

On December 13, 1995, Santa and Mrs. Claus paid a visit to Bonilla Island, not in the usual red sleigh, but instead aboard a shiny red Sikorsky Coast Guard helicopter. Nine-year-old Bryn Van Rooyen had been anticipating the visit since early that morning. We don't see him very much, she said. I'm surprised that he would come to my house. He's neat! Bryn's three-year-old sister Jayse was a bit perplexed as Santa wasn't supposed to bring her gifts until Christmas morning.

Besides minding the light and issuing weather reports, Keeper Eric Van Rooyen provided another valuable service to Canadian fishermen - broadcasting the scores of the Vancouver Canucks' hockey games. We get a lot of fishermen calling us for scores, said Keeper Van Rooyen. It's hopping here when the game is on.

The current round tower was placed on the island sometime between 1982 and 1994. In January 2000, the Coast Guard announced plans to discontinue the foghorn at Bonilla Island. Harvey Bergen, the keeper at the time, didn't think that eliminating the foghorn as a cost-cutting measure made sense, since it required little maintenance and provided a safety net for mariners. The only thing I've been thinking about since the announcement is when a technician does come out here, I may have a war with him. Keeper Bergen manged to survive the war and went on to serve another decade on the island before retiring in 2012.

For a larger map of Bonilla Island Lighthouse, click the lighthouse in the above map.

Bonilla Island Lighthouse is best seen from the water or from the air. I chartered a float plane out of Prince Rupert to photograph the lighthouse.


I circled the island several times at different altitudes to try to get a good photograph of the lighthouse. After returning to the floatplane dock, I found out that the keeper on Bonilla Island had radioed the floatplane company to find out if one of its planes was in trouble over Bonilla Island. Good to know that the keeper was looking out for us.