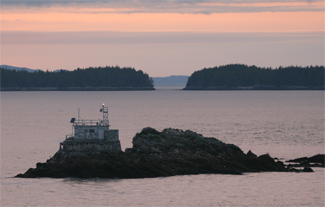 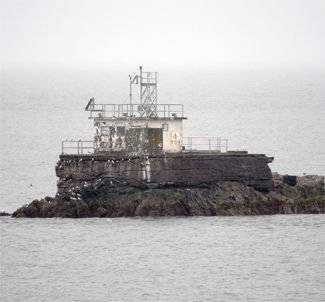 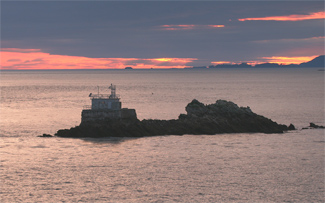 The southern approach to Prince Rupert Harbor is bounded on the east by islands lying off the southwestern side of Tsimpsean Peninsula and on the west by Holland Rock, Kinahan Island, and Digby Island. In 1867, Captain Pender, while in command of the S.S. Beaver, named Holland Rock after Lieutenant Swinton Colhurst Holland, who would later rise to the rank of Admiral in the Royal Navy. Barren and with a height of just ten feet, Holland Rock has long been recognized as a menace to mariners. In May 1908, an automatic acetylene beacon, placed atop Green Top Island in 1906, was moved roughly two miles to the west to mark Holland Rock. Four years later, in 1912, work began on a formal lighthouse for Holland Rock.

Built atop a concrete, pier, the lighthouse consisted of a rectangular, two-storey dwelling, with a square tower, topped by an octagonal lantern room, built into its northeast corner. A $13,500 contract was awarded to J.H. Hilditch to erect the lighthouse, and a Class A diaphone plant for the station was supplied by the Canadian Fog Signal Company of Toronto for $1,515.12.

In September 1946, an overheated cook stove set fire to the lighthouse. As the blaze quickly spread throughout the structure, the keeper had no choice but to flee the rock in the stations skiff, taking along his pet cat. All that was left on the concrete pier after the fire was a pile of rubble and the lighthouses brick chimney, which survived the incident intact.

In place of the lighthouse, the Department of Mariner erected a white, skeletal tower, on the concrete pier to display a flashing white light and a fog bell that tolled once every twenty seconds.

In 1949, a fog alarm building was built on the concrete pad to house two air-cooled, gasoline-engine-driven compressors supplying compressed air to a Type-B diaphone horn, which gave three, two-second blasts each minute. In June 1952, an experimental microwave system, developed by the National Research Council in Ottawa, was installed to remotely control the fog alarm from Barrett Rock. The following description of this system is from the July 1955 edition of Electronics:

The microwave remote-control equipment provides the resident lightkeeper at Barrett Rock, 4.9 miles away, with a means of selecting either of the two gasoline-engine-driven compressor units at Holland Rock and starting and stopping it at will.

If the wind is blowing in an adverse direction, the operator at Barret Rock often cannot hear the sound of the horn at Holland Rock. To check its operation, there is a small radiotelephone transmitter at the remote site, which is turned on automatically every time an engine is started or stopped. This transmitter broadcasts the sound of the horn and the engine on the lighthouse communication channel for a period of two minutes, after which it is turned off automatically.

This monitoring operation can also be performed at will, as often as is necessary to ensure that the engine is running and the horn blowing satisfactorily.

The system was believed to be the first of its kind for the remote control of a fog-alarm station by microwave link. Tom Moran was the keeper at Barrett Rock when the system was deployed.

In 2010, a square, skeleton tower perched atop a concrete building on the old lighthouses pier sends out a group of three flashes every twelve seconds.

For a larger map of Holland Rock Lighthouse, click the lighthouse in the above map.

Holland Rock Lighthouse is best seen from the water and is visible from the Inside Passage ferry that connects Prince Rupert and Port Hardy.