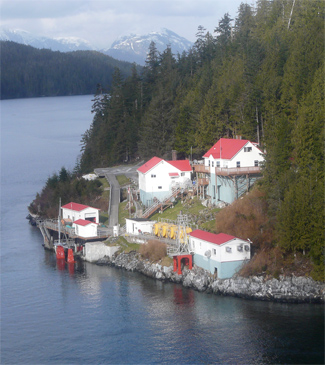 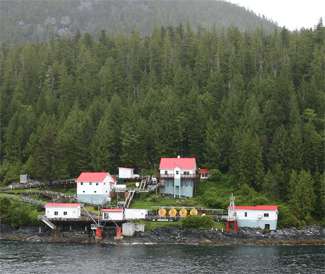 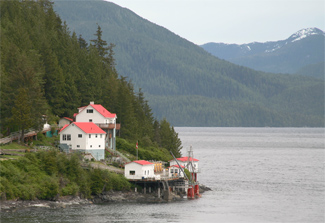 Teetering on the edge of a bluff and surrounded by water and an impenetrable forest, Boat Bluff Lightstation marks the southern entrance to Tolmie Channel. This lonely outpost, situated on the southwest point of fifteen-mile-long Sarah Island, is the last marine and aviation reporting station along the Inside Passage before reaching Prince Rupert.

In a northerly transit, ships must execute a tricky maneuver to enter narrow Tolmie Channel with its fast flowing tidal currents. This course change has been described as akin to threading the eye of a needle and is especially dangerous at night.

In 1907, an unwatched light, automatically eclipsed at short intervals, was established at Boat Bluff. This light consisted of a white cylindrical tank on a white steel truss surmounted by a red pyramidal steel frame that supported a lantern.

Today the light is exhibited from a square pyramidal skeletal tower mounted on a square, concrete base with four legs. The tower stands twenty-four feet (seven metres) high with a focal plane of thirty-eight feet (11.6 metres), and the light, which has a period of five seconds, is red or white depending on the angle at which it is viewed. The station has two, two-storey houses for its resident keepers, along with a fog alarm building and an engine room.

Ferries, cruise ships, tugs, and barges pass so close that those aboard can wave at the keepers and their families as they go by, yet life at the station is very isolated. If a medical emergency arises, the keepers must first take the station boat three miles to Klemtu, where they then take a seaplane to Bella Bella, which has a small community hospital. In rough weather, this journey can be an all-day event, and rough weather is more common than not.

Boat Bluff gets more rain during the summer than any other British Columbia ligthstation, and during the dark winters, it is constant rain, snow, and then more rain.

It was on one such winter day, on February 26, 1936, that the Maid of Orleans, a two-masted trading schooner headed north along the Inside Passage, was caught in a blinding snowstorm. One crewmember said the snow was falling big as dollars. Unable to see Boat Bluff Light or hear the fog signal, the schooner slammed into the island at 4:00 a.m.

The fifteen passengers and crew remained on board, thinking that the vessel would float off with the outgoing tide, but six hours later, the schooner slid off by the stern causing water to pour in through the portholes. The crew had just minutes to launch the lifeboats before the Maid of Orleans sank. Wet and exhausted, they rowed to the beach at Boat Bluff and climbed to the safety of the lighthouse where they were succored by keeper Tom White and his wife until a passing ship was signaled and the passengers were taken to Vancouver.

They sure looked after us, Cook Pinky said. We had managed to take some food from the vessel with us, and that helped out. But we were mighty wet and uncomfortable by the time the lightkeeper and Mrs. White took us in. It was the first voyage for a Mrs. Dimmock, but she vowed the experience would not keep her ashore.

The following appeared in an October 1960 edition of News on the DOT, the Department of Transport's staff publication: "Mr. and Mrs. H. Shorson added a daughter to their family last January. They now have six daughters and four sons. Mr. Shorson is the lightkeeper at Boat Bluff lightstation."

Though devoid of human contact, the keepers at Boat Bluff are not alone on the island. Sightings of deer, cougar, wolves, and black bear are not uncommon, but keepers have yet to see a Kermode bear, a subspecies of black bear found exclusively along the coast of British Columbia and for which a nearby island is famous. Roughly ten percent of Kermode bears have a white coat. One keeper requested a transfer from Boat Bluff as the islands many wolves made him fear for the safety of his family.

Frank Dwyer was working in Victoria in 1996 when he got word of an opening at Boat Bluff. Fearing that the lights would soon all be automated, Dwyer jumped at the opportunity. You cant beat it for spending time with the kids, Dwyer noted, but filing weather reports every three hours could get a bit old. You do the weathers and dont even know if anyone uses it, but when you ask pilots, they tell you that they depend on them.

In spite of the isolation and wet weather, the keepers who have served at Boat Bluff describe it as tranquility at its best and a confining but awesome place to live.

Chris Mills, who served at the station in the 1990s, described it this way, Often the channel was as calm as a millpond and in the winter - when it wasnt raining or snowing - there was an amazing clarity to the air, as the stars almost popped and cracked above the surrounding hills.

For a larger map of Boat Bluff Lighthouse, click the lighthouse in the above map.

Boat Bluff Lighthouse is best seen from the water and is visible from the Inside Passage ferry that connects Prince Rupert and Port Hardy.