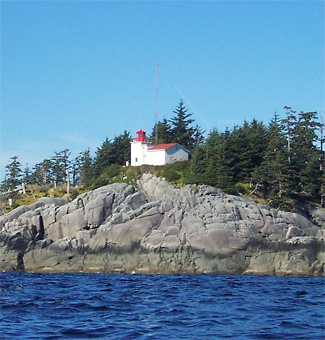 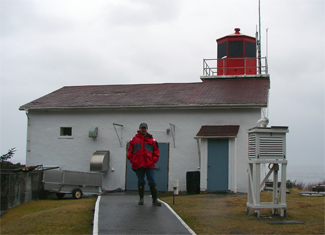 Most mariners sailing north along the British Columbia coast follow the Inside Passage, as it is sheltered from the open Pacific Ocean by a string of islands. Though mostly protected, this route does have a few significant gaps where vessels are exposed to ocean swells. One of these openings is at Milbanke Sound, which is bounded by a smattering of islands off Price Island to the north and the Bardswell Group of islands to the south.

In 1921, a light was established on McInnes Island, located off the southern end of Price Island, to mark the northern side of the entrance to Milbanke Sound. This unwatched light was described as being exhibited from a concrete base surmounted by a staff carrying a white slat-work ball and a red lantern.

McInnes Island is named after Thomas Robert McIness a physician who served in the House of Commons, the Senate, and finally as Lieutenant of Governor of British Columbia from 1897 to 1900.

In the 1950s, the British Columbia provincial government invited the Aluminum Company of Canada (Alcan) to construct an aluminum smelter in the Kitimat Valley, located 200 kilometres north of McInnes Island. Between 1951 and 1954, Alcan built a reservoir, a hydroelectric generating station, a deepwater port, and a townsite, to support the smelter in what was called the most expensive project ever attempted by private industry.

Anticipating an increase in marine traffic passing through Milbanke Sound due to the Kitmat aluminum smelter, the Department of Transport (D.O.T.) built a major light station on McInnes Island in 1953  1954 consisting of three dwellings, a lighthouse, a fog alarm building, a boathouse, a landing platform, and an aerial cable. The lighthouse is a white rectangular building with a tower built into one of its corners from which a group of two white flashes was originally exhibited every twenty-four seconds. The stations diaphone fog alarm gave a group of three blasts each minute when necessary and was synchronized with a radiobeacon for distance finding. When within audible range of the station, navigators on vessels equipped with radio receivers could determine their distance from McInnes Island in miles by noting the time in seconds which elapsed between receiving the radio signal and hearing the fog signal blast and dividing the result by five.

Lightkeepers pride themselves on being the eyes and ears along the British Columbia for mariners and aviators. In the spring of 1978, John Coldwell, who had just arrived on McInnes Island as head keeper the previous August, awoke one morning to find the ocean all around the island milky white instead of its usual blue. Keeper Coldwell radioed the Coast Guard in Bull Harbour to report the pollution, and then a short while later was embarrassed to discovered that the discoloration was due to a massive herring spawn.

On June 16, 2011, seventy-eight-year-old Ken Stewart took a daytrip out to McInnes Island from Bella Bella with his son-in-law to see the lighthouse he had helped build fifty-eight years earlier. The contract for construction of the lighthouse and three keepers dwellings was awarded to Stewart & Slade Construction, a company co-founded by Kens father.

In August 1852, Kens, three carpenters, a cook, and father five labourers, one of whom was Ken, arrived in Bella Bella by Coast Steamship and were then transported to McInnes Island aboard a war-surplus landing craft by Andy Wilson, who also owned a sawmill that provided the lumber for the project. Prior to the crews arrival on the island, the Department of Transportation had erected two tents for the men along with an overhead cable that could be used to land supplies. The D.O.T. ship Alexander Mackenzie delivered 2,500 bags of cement, roofing shingles, framed doors and windows, and the necessary cabinetry, and 300 cubic yards of gravel were stored on a large barge safely moored in a nearby cove.

The labourers had to excavate the basements for the three dwellings and the foundation for the lighthouse by hand. The men would work six, nine-hour days, followed by just three hours on Sundays. On one of these Sundays, the men decided to scare off a nearby sea lion colony, whose constant barking was getting on their nerves. A three-foot section of pipe was cut, placed into a hole drilled into a stump, and then filled with dynamite and stones to create a cannon. After lighting the fuse, the men scurried for cover. The explosion blew apart the pipe and stump but went practically unnoticed by the sea lions.

By the time the men left for a winter break on December 15, 1953, the three houses and lighthouse were framed in, and Keeper Larry Reid had arrived on the island. A reduced crew returned in March and spent a month and a half finishing the work. It is amazing to think that such an ambitious project could be completed on a remote island in less than six months.

The station had changed some since Ken left the island in 1954. Two dwellings had been replaced by more modern structures, a pitched roof had been added to the lighthouse, and a helicopter-landing pad had been built. But there was a lot that remained familiar, including the highline for landing supplies and the general layout of the station. The fine condition of the station is certainly attributable to resident keepers, who, despite several attempts at de-staffing British Columbia lighthouses, have been a constant presence on the island.

For a larger map of McInnes Island Lighthouse, click the lighthouse in the above map.

McInnes Island Lighthouse is best seen from the water and is roughly eleven miles west of the route followed by the Inside Passage ferry that connects Prince Rupert and Port Hardy.