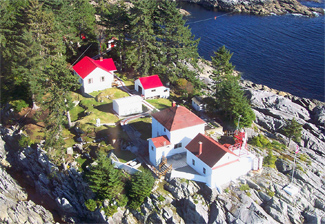 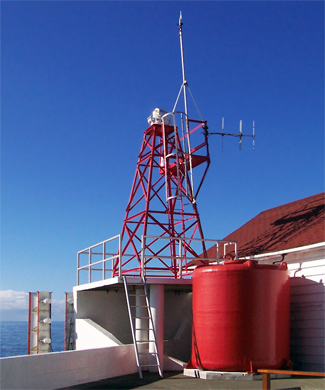 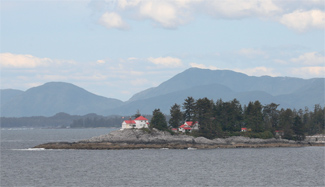 The Inside Passage provides mariners a protected route for sailing along much of the British Columbia coast, but in a few places, vessels are exposed to the Pacific Ocean. One of these points of exposure occurs as Milbanke Sound, which links to Seaforth Channel to the east and Finlayson Channel to the north.

In February 1894, the British Columbia Board of Trade petitioned for a lighthouse on Ivory Island to mark the junction of Milbanke Sound and Seaforth Channel. During the summer of 1898, the steamer Quadra landed a workforce, under the charge of Alexander Bruce of Vancouver, on Ivory Island, and over the next few months a lighthouse slowly rose atop Surf Point, the southwest point of Ivory Island that is today more commonly known as Robb Point.

A lighthouse on Surf Point, Ivory Island, Milbank Sound, was put in operation on the 1st October. The lighthouse, which stands upon the bare rock on the south part of the point, is a square wooden building, with vertical walls, carrying a square wooden lantern on the summit of the cottage roof. The walls are painted white, the roof and lantern red. The height of the building, from its base to the vane on the lantern, is 30 feet.

The light is a fixed white light, elevated 66 feet above high water mark. The illuminating apparatus is dioptric, of the 7th order.

The building was erected by days labour, under the supervision of Mr. Alexander Bruce, of Vancouver, at a cost of $2,009.35.

Peter Wylie was hired as the lights first keeper, and it wasnt long until the exposed station was dealt its first blow by swells generated by the Pacific Ocean. A succession of storms obliterated the stations boathouse that first November, and Keeper Wylie unwisely waded out into the surf to collect what debris he could salvage with a boat hook. When Captain James Gaudin, the Marine Agent, visited Ivory Island on March 24, 1899, he pronounced Wylie an intelligent painstaking and helpful officer and learned that he had not had the opportunity to speak to a person for over three months.

The isolation proved too much for Wylie, and when J.C. Thompson took charge of the light in June 1899, he noted that Wylie was the most overjoyed man in Canada on his release. Keeper Thompson lasted longer than Wylie but only by a few months. A new boathouse was built for $89 and a new boat delivered during the summer of 1899 to replace what the storms had destroyed the previous year. After just over a year at Ivory Island, Thompson sent off his resignation letter:

I am sorry [to resign] but my wife absolutely refuses to leave unless I go with hear and it would be unkind on my part to stay against her wishes. We are so far from medical assistance and she dreads so her attacks so far from a Doctor.  The fact of it is I should never have brought a sick woman out here.

James Forsythe, the next keeper, managed to last a few years, but after his wife and baby contracted dysentery from the stations contaminated water supply in November 1904, he too resigned. Fortuitously, the government steamer Kestrel was in the area, noticed Forsythes distress signal, and took the sick mother and three-year-old child to the hospital in Bella Bella, otherwise, as Captain Gaudin later reported to his superior, it was probable the child would have succumbed.

F. Reuter, a boatman that had few equals on the Pacific Coast, was recruited to replace Forsythe. In 1908, a fog alarm building was built southwest of the lighthouse to house a 1 ½ -inch diaphone plant supplied by the Canadian Fog Signal Company of Toronto, for $1,900. The fog alarm gave a four-second blast each minute as necessary and replaced a hand-powered foghorn that had been used on the island since 1901.

In December 1908, Captain Holmes Newcomb of the Kestrel notified the Department of Marine that the new fog alarm had been damaged by the sea and was out of commission. It was later determined that an earthquake centered near the Queen Charlotte Islands triggered a tidal wave that broke in part of the fog alarm building. During the summer of 1909, C. H. Tubman and a gang of men built a breakwater to protect the stations buildings and raised the tower atop the lighthouse so the fog alarm building would not obscure the light.

Due to his isolation, Keeper Reuter was unable to fill out naturalization papers and have them notarized as many other German immigrants did at the outbreak of World War I. To prove his loyalty, he contributed to the Patriotic Fund, but that apparently wasnt enough. In June 1916, Keeper Reuter was dismissed after more than a decade on Ivory Island for being an alien enemy subject.

When Jean Ness Findlay, a reporter, visited Ivory Island in 1942, Charlie Hoy had just arrived on the island with his wife, a canary, four cats, and a dog named Rusty. The Hoys were expecting a carpenter to arrive any day whom they had to billet for a couple of weeks while he repaired the bridge that linked the stony point on which the lighthouse stood to the rest of Ivory Island. A tidal wave the previous November had damaged the bridge along with other property at the station.

The reporter soon learned that Rusty was fond of playing hide-and-seek. It was the job of any visitor to hide a match anywhere in the lighthouses living room, and then Rusty, after much snuffling about, would invariably find it and lay it on the visitors knee to trigger another round.

The destructive power of the sea at Ivory Island was again demonstrated when John Desmuelles, a deckhand on the tender Elberni, drowned in the surf in 1938 when a landing boat capsized. Two other men that managed to cling onto the overturned boat were rescued.

Gordon Schweers became head keeper of Ivory Island Lighthouse in 1981. Schweers and his wife Judy corresponded for nine months before Judy left her home and family in California and headed north for a risky blind date  marriage to a man she had never seen and new life on a remote island in northern British Columbia. Mother Nature took another swipe at the station during the eleven years that Gordon Schweers spent at Ivory Island. It was 10 p.m. on Christmas Eve of 1982 that the first indication of trouble was received  nearby McInnes Island Lighthouse reported that their barometer was 29.88 and falling rapidly. A winter storm had been buffeting the station for about a week, and now it seemed the weather was going to worsen. By midnight, the barometer had fallen to 29.25.

Keeper Schweers was living in the square dwelling, the oldest home in the Prince Rupert agency. Though it had been carefully built with seasoned fir and reinforced floors, that night it was groaning in every rafter like an old barque as gale force winds swept along the open ocean from Cape St. James to the stations back doorstep. The combination of wind and water made the kitchen windows resemble a plastic sheet which was expanding under heat.

The tide peaked early on Christmas morning when a wave surmounted the sea wall and flooded the station. Keeper Schweers later gave the following description of that memorable Christmas Day.

Our only indication that we were over our heads came when the outer door to the radio room filled entirely with white sea water.

For a second the door seemed to resist  then the dam burst, flooding sea water and debris into the kitchen pantry, basement, living room and cistern. Neither keeper was injured by flying glass, even though I had bare feet and fled the room while it was still awash.

With an outer kitchen window shattered, we moved back into the safety of another room, but were again interrupted while ebbing the flow of water.

There is no way of knowing whether the 32-foot metal tower was knocked down by the same wave or one succeeding it, yet the DCB 10 main light shone [its] search beam hard through the living room windows for several minutes before burning out. In the confusion I had briefly mistaken it to be the beam from a ship driven off course by the storm.

Besides the dwelling, only the stations radio antenna, braced by eight guide wires at the southeast corner of the point, remained standing. The importance of Ivory Island Lighthouse is evidenced by the fact that it remains staffed today despite its dangerously exposed location.

For a larger map of Ivory Island Lighthouse, click the lighthouse in the above map.

Ivory Island Lighthouse is best seen from the water and is visible from ferries that serve the Discovery Coast and Inside Passage from Port Hardy.