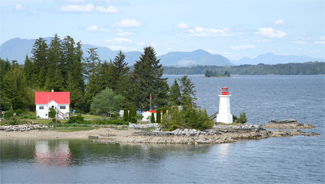 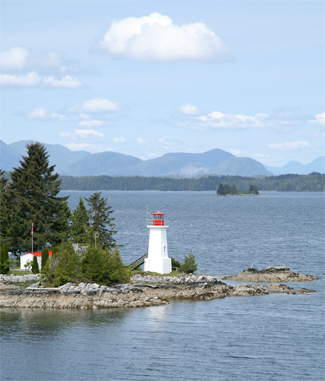 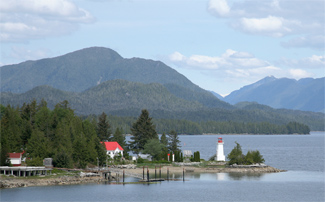 Nestled on the northeastern corner of Campbell Island along the picturesque Inside Passage of British Columbias central coast, Dryad Point Lighthouse marks the junction of Lama Passage and Seaforth Channel. Originally named Turn Point by the Admiralty surveyors because of the sharp turn needed to continue along the Inside Passage, Dryad Point received its current name in 1899, when its lighthouse was built, to avoid confusion with Turn Point Lighthouse in the San Juan Islands.

The new name, Dryad Point, was in honor of the Hudson Bay Companys brig, Dryad, which, under the command of Captain Kipling, brought materials and stores from Fort Vancouver for the founding of Fort McLoughlin (current day Bella Bella) in 1833.

The area has a rich First Nation heritage, with Bella Bella being home to the Heiltsuk Native Band, and so it seems fitting that the first lightkeeper at Dryad Point was of First Nation descent. Keeper Carpenter, whose first name translates to Rainbow in English, was a large imposing figure and his wife was a descendant of Chief Kaiete.

Captain Carpenter recorded the story of an attack Chief Kaiete made on a ship trading fur pelts in Milbanke Sound, just north of Campbell Island. Chief Kaiete had a dispute with the captain of the ship, and so one day, while the captain was leaning over his ships railing looking at furs piled in a canoe, the natives killed him and attacked the ship. The ships cook defended himself by throwing boiling water on the natives, scalding some and blinding others. Several of the ships crew, including the cook, were killed, but scores of natives also died, including Chief Kaiete. The surviving crew fired a gun at a canoe full of natives, killing all of them. In relating this part of the story, Captain Carpenter said Hiyu, poh; Halo Indian, meaning much blow up! No Indians. After this heavy discharge of grape, the remaining crew managed to escape aboard their ship, but it was a day of sorrow that the First Nation band never forgot.

The details of Captain Carpenters story align with the massacre of the crew of the Atahualpa, a fur trading ship out of Boston, on June 13, 1805. Captain Oliver Porter and nine of his men were killed before the remaining thirteen crewmembers, nine of whom were wounded, were able to regain control of the ship and escape.

During the initial service of Captain Carpenter, Dryad Point Lighthouse consisted of a small dwelling attached to a square white wooden tower, which stood on a red foundation and was surmounted by a red lantern. The tower beamed forth a fixed white light from a seventh-order lens at an elevation of thirty-six feet above high water and was illuminated for the first time on November 7, 1899.

A hand foghorn was added in 1901 to answer the fog signals of vessels whenever they were heard from the lightstation, and in 1903, a red sector was inserted in the light at the request of mariners, who complained that the light was so bright when they were close aboard, that they could not correctly estimate their distance in rounding the point.

In 1919, the current lighthouse, a twenty-five-foot (11.6 metres), reinforced concrete structure, replaced the wooden tower. The present signature of the light is an occulting white light with a red sector. Captain Carpenter remained keeper until 1930, when a new dwelling and boathouse were constructed at the station. A small foghorn plant was added in 1932 to replace the hand horn.

In 1964, Henry Bergen took over as keeper. Bergens lightkeeping career started in 1958, when he saw a notice for a lighthouse keeper position while standing in an unemployment line. Bergen and his Philippine-born wife, Angie, lived at Dryad for nineteen years, raising their family there. Because of the calmer waters around the point, the station was equipped with a dock, which allowed the Bergen children to make a two-mile boat ride to attend school in Bella Bella. Being less isolated, Dryad Point is considered a plum assignment. The Bergens eldest son, Harvey, continued the familys lightkeeping tradition and returned to Dryad as keeper in 1996.

When Chris Mills was serving as keeper in 1997, a new foghorn was received along with a prefabricated aluminum building topped with an array of solar panels. The Coast Guard had announced that Dryad Point would be automated by March 1998, and work was underway to prepare the station for the transition. Providing weather reports every three hours was one of the keepers responsibilities along the Inside Passage and was mostly responsible for the Coast Guards decision to cancel the planned automation of several stations. If we knew that Dryad Point would stay open for a couple of years, wed stay, said Mills, but with the pending automation, his wife had already found another job for the following year.

Today, Dryad Point can be easily seen from passing ships along the Inside Passage. A twinkling gem along a magical route.

For a larger map of Dryad Point Lighthouse, click the lighthouse in the above map.

Dryad Point Lighthouse is best seen from the water and is visible from the ferries that serve the Discovery Coast and Inside Passage from Port Hardy.