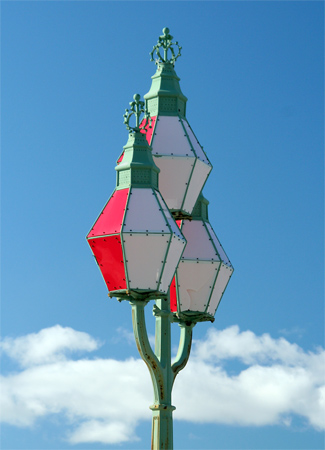 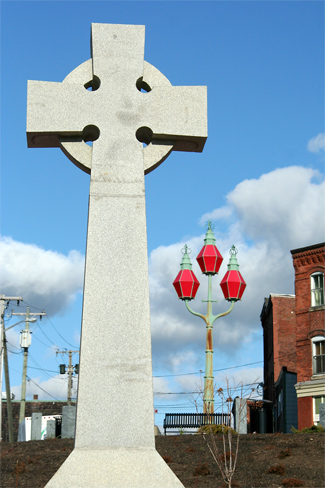 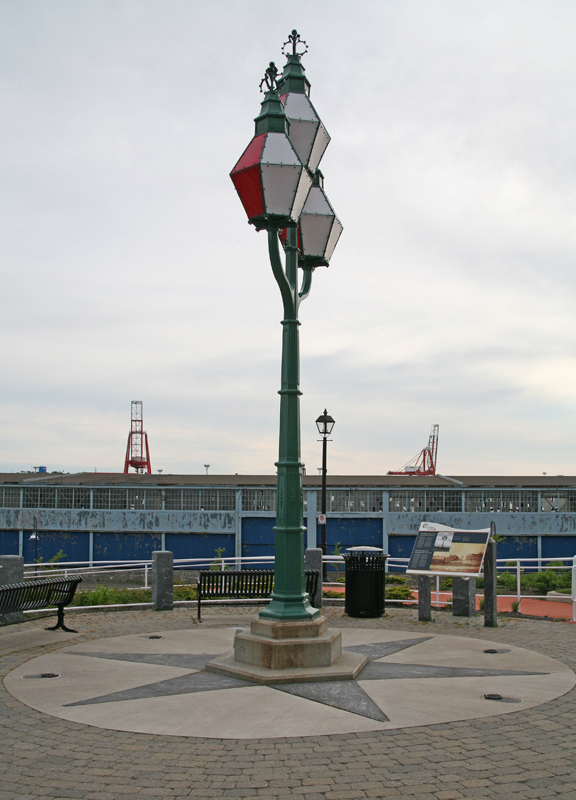 Although Reed's Point Light may not qualify as a formal lighthouse, it is far too interesting an aid to navigation not to include. The original light at this location, erected in 1842, was a single iron post and was positioned to line up with the steeple of Trinity Church to help guide ships into the harbour at night.

In a letter dated January 12, 1847, the Commissioners of Light Houses in the Bay of Fundy informed Sir William M. G. Colebrooke, Lieutenant Governor of New Brunswick, of a new method of lighting the beacon at Reed's Point.

An arrangement has been made with the Gas Company in this City, to place a large Lantern with three Burners, at Reed's Point, to serve as a leading Light up the Harbor, the Light House Fund to pay for the additional consumption of Gas over what an ordinary Street Lamp burns, for which this Light also answers, and for which the City Corporation pays; this will be completed in a few days.

The Gas Company was paid £83 for the new post and lanterns at Reeds Point.

A year later, in 1848, the Saint John Gas Company commissioned Alexander Campbell to replace the single lamp with three lamps on a trident. The lanterns displayed red to sea and white toward shore. If all three lights were seen separately then the ship was within the channel; if only one or two showed, then the ship was off course. A breakwater was put in place to protect the bank at Reed's Point in 1850, and a granite base for the post was provided in 1854. The Gas Company was paid $60 each year from the Lighthouse Fund to operate the light in the 1860s.

In 1872, after New Brunswick had joined the Confederation, one-third of the cost of operating Reed's Point Light was paid by the City Corporation and two-thirds by the Department of Marine. The three lights were converted from gas to electricity in 1896, when a sixty-four-candle power incandescent lamp was placed in each of the lanterns. At the time of the change, it was noted that "in case of any accident happening to the electric supply, illumination by gas will be temporarily resumed."

In the spring of 1897, the lamp post, which by then had been electrified, was raised fifteen feet so that its three lights could be more clearly distinguished from the other electric lights along the harbour front, which were of roughly the same height. This alteration cost $45.70, and at this time the annual maintenance cost of the lights was $150.

Restoration of the beacon was carried out in 1967 by H.S. Gregory & Sons and the Saint John Iron Works. On October 3, 1967, the "three lamps" were rededicated to the Saint John Harbour Pilots, and a plaque was added to commemorate the seven lives lost when Pilot Boat No. 6 was cut in two on January 14, 1957 by the S.S. Fort Avalon while on station in thick fog. At the same time, a half-size replica of the Celtic cross on Partridge Island was erected nearby.

After 140 years of withstanding the elements, the old lamp post was replaced with a replica in 1997. In late 2008, St. Patricks Square was completely renovated as part of a massive waterfront development in the area, and it now serves as the southern end of the popular Harbour Passage walking path. Reed's Point Light, affectionately known as "The Three Sisters," has become a familiar icon for the city of Saint John.

For a larger map of Reed's Point Lighthouse, click the lighthouse in the above map.

From Highway 1 in Saint John, take Exit 123 and travel south along the waterfront passing the Hilton Hotel. Continue south on Water Street, and when it turns left, turn left onto Prince William Street, where you will find Reed's Point Light.