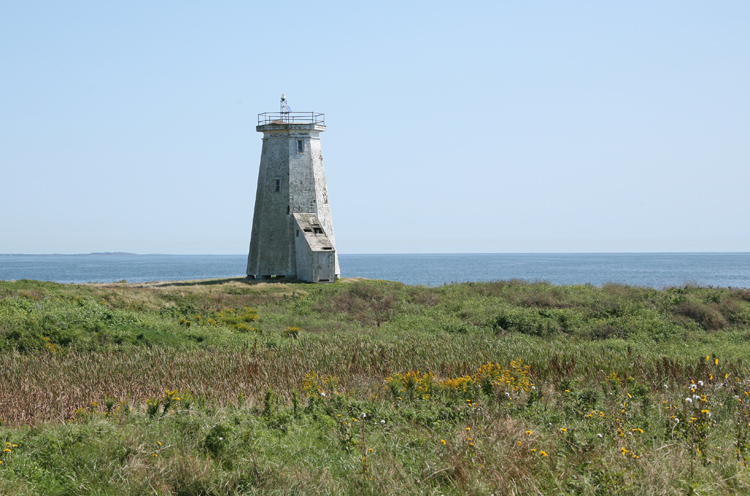 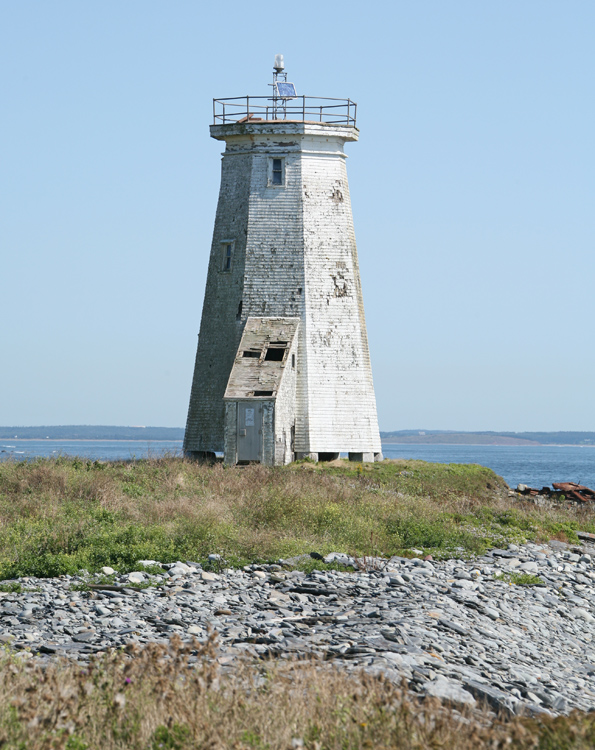 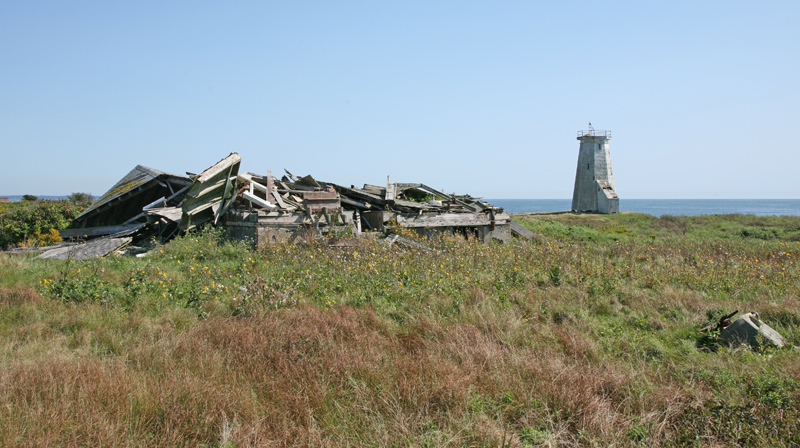 Devils Island is roughly thirty-seven acres in size and is the outermost island in Halifax Harbour. The island guards the southeast approach to Halifax and is situated just offshore from the community of Eastern Passage.

Devils Island has had a few names over the years. The island was granted to Captain John Rous in 1752 and was subsequently known for a time as Rous Island. Before a fire ravaged the island, the British had called the island Wood Island for its stand of trees, while the French called it Île Verte (Green Island) for the same reason. The name Devils Island is said to be a corruption of the name of Frenchman who was associated with the island, but when exactly is not clear. His name is believed to have been Deval, Devol, or perhaps DeVille.

A day beacon was built on the island sometime before 1849, for in that year the Commissioners of Lighthouse for Nova Scotia made the following recommendation:

It may not be irrelevant here to suggest, that if the Day Beacon on Devils Island was fitted with a harbour or distinguishing Light, which could be done at a trifling expense, it would afford a very great security to the increased coasting, as well as the general trade of the Province, and for want of it several valuable vessels have been lost on, and in the vicinity of the Island, and the present week, another valuable Brig run ashore near it, and the lives of the crew endangered by the inclemency of the weather at this season.

Various merchants, traders, and mariners from Halifax petitioned the provincial government in 1851 for a lighthouse on Devils Island, which had just the previous year claimed the brig Southampton. The Southampton was carrying a load of flour when it ran aground on the southwest point of the island. All but one of the crew managed to get ashore on lines. A sum not to exceed 1,500 pounds was granted in early 1852 to erect a few new lighthouses in the province, and that year a lighthouse was erected on Devils Island at a cost of £283. The plan was to have the lighthouse burn gas produced on the island rather than oil, and to this end, £116 had been expended in constructing a building with a furnace and two retorts for distilling gas from asphaltum. As the needed asphaltum could not be obtained, the lighthouse had to be placed in operation with oil.

A gasometer or storage tank for the gas was built into the floor of the wooden, octagonal lighthouse, and a one-room apartment for the keeper was located above this. Keeper Edward Bowen placed the light in operation in 1852 and was forced to live on the island alone as he had no space for anyone else at the lighthouse. During stormy or wintry weather, he would go weeks without being able to make the short trip over to Eastern Passage to see his family. A dwelling was finally built for Keeper Bowen in 1859.

A report made in 1857 indicates that Devils Island Lighthouse was painted dark brown and displayed a fixed, red light. As mariners complained about the dimness of the light, a large Argand lamp was placed in the lantern room to accompany five catoptric lamps, with reflectors. It was well understood that using red panes of glass in the lantern room to create a red light greatly reduced the power of the light, but some method had to be used to differentiate the light on Devils Island from the white light on Sambro Island and others in the vicinity.

The equipment to make gas on the island was removed by 1857, and pale seal oil was being used until 1863, when a switch to Albertine oil was made as it produced a more brilliant and uniform light. Albertine oil derived its names from Abraham Gesners success at extracting kerosene from coal mined in Albert County, New Brunswick.

An attempt to further improve the light was made in 1869 by changing the glass in the lantern room from red to clear, and the lamp chimneys from clear to red. This proved to actually reduce the power of the light until the chimneys were made with a lighter shade of red.

The Department of Marine provided Keeper Benjamin Fulker with a wooden, twenty-eight-foot lifeboat during the summer of 1874 and noted that the residents of Devils Island and the adjacent shores were primarily fishermen, well-accustomed to the sea, and could be called to man the lifeboat when needed. Just months earlier, on January 15, 1874, the schooner Union had wrecked near Devils Island, and Keeper Fulker and five other brave men had set out in a wild storm to rescue its crew of two men and a boy. A.J. Smith, Minister of Marine and Fisheries, sent each of the six men who risked their lives a letter of thanks for their gallant exertions along with a cheque for twenty dollars.

During the summer of 1877, a second lighthouse was built on Devils Island and starting on October 15 of that year, two fixed, white lights were shown from the island. Jacob Bowser built the new wooden, octagonal lighthouse under a contract for $2,143 while E. Chanteloup of Montreal provided the iron lantern room and the lighting apparatus, consisting of thirteen lamps and seventeen-inch reflectors, for $1,652. The old lighthouse was relocated 132 feet to the northwest of its former site, and the new lighthouse was placed 524 feet east of this. William Fenerty was paid $679 to move the old lighthouse, and a building for an oil store was erected over the cellar at the site of the old lighthouse for $120. Besides producing brighter lights, the two lighthouses had another advantage: Mariners could align the two towers to avoid Thrum Cap Shoals and safely enter the harbour.

As the addition of a second light increased his workload, Keeper Benjamin Fulker had his annual salary raised from $380 to $500. A new lantern and lighting apparatus were installed atop the western tower in 1880 to make the lights of equal strength, and new keepers dwelling was built in 1890. In 1892, a wire fence was placed around the keepers dwelling and western lighthouse to prevent cattle from eating the keepers garden and defacing the buildings.

Devils Island Lighthouse was made unwatched in 1967, and Keeper Charles McDonald left the island. All the stations remining buildings save the east lighthouse were declared surplus and sold off. The lantern room was removed from the lighthouse in 1978, but the headless tower continued to serve mariners for several more years. The Coast Guard made extensive repairs to the wooden lighthouse in the 1990s, and then in 2011, it erected a square, skeletal, steel tower near where the western tower had stood to display a light. The 1877 eastern lighthouse was decommissioned and left to the elements. In 2012, a storm flattened the keepers dwelling, which had been built in the 1930s. Unless a group is formed to save it, Devils Island Lighthouse, one of the few surviving octagonal wooden towers in Nova Scotia, will likely suffer a similar fate.

Drone video shot in 2016 shows that some restoration work had been done on the tower, but another drove video shot the following year, shows the enclosure surrounding the external stairs to the tower had collapsed and that the seaward side of the tower is missing a good portion of its shingles.

For a larger map of Devil's Island Lighthouse, click the lighthouse in the above map.

The lighthouse is best seen by water, but a distant view of Devil's Island Lighthouse can be had by following Route 322 along the east side of Halifax Harbour until you reach its southern end.

The lighthouses is owned by the Canadian Coast Guard. Grounds open, tower closed.