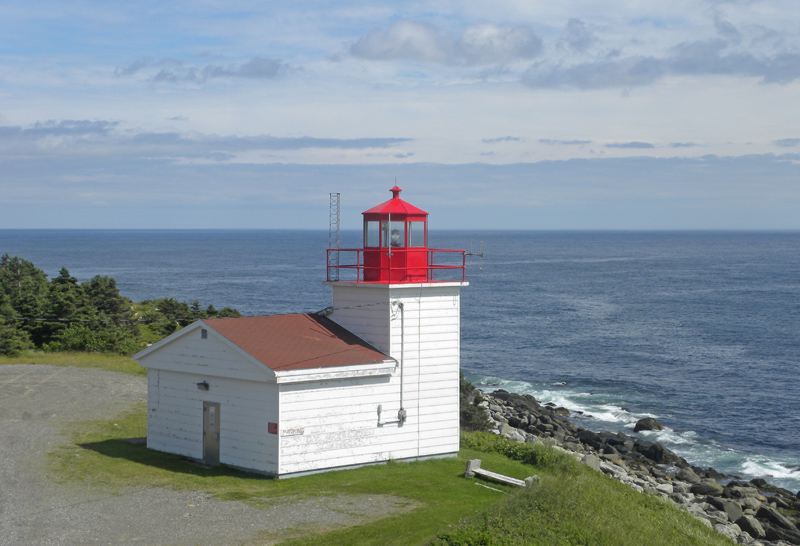 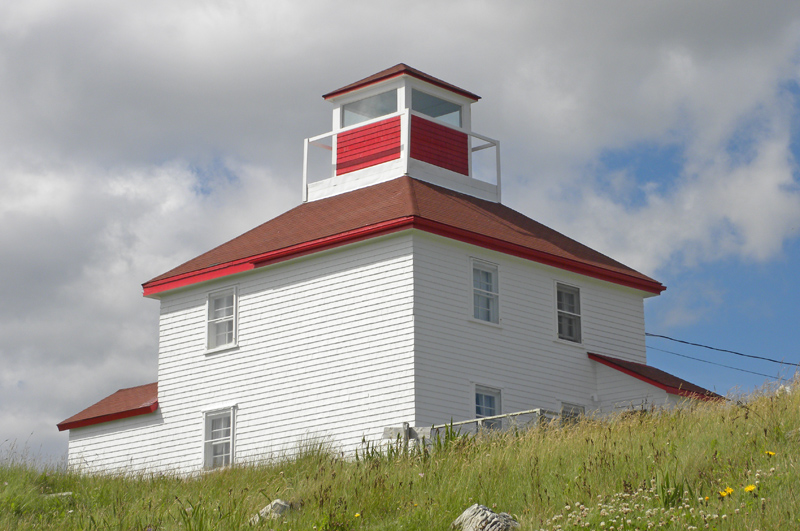 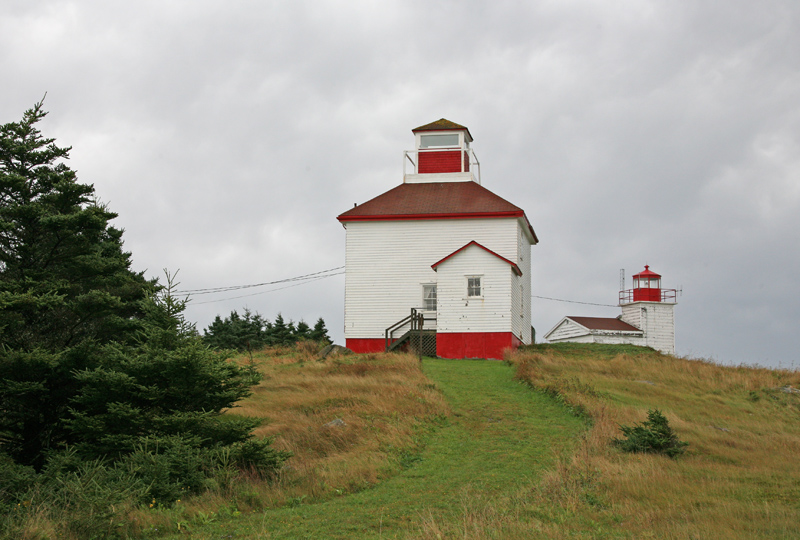 The first lighthouse to mark Port Bickerton was built in 1901, and the Annual Report of the Department of Marine for that year carried this description of it:

A?small harbour light was put in operation on October 10, 1901. The building is a square wooden tower, with sloping sides, surmounted by a square wooden lantern, the whole painted white. The tower is 23 feet high from base to top of ventilator on lantern. It is erected near the western extremity of Barachois point, 100 feet back from the water's edge in a north-easterly direction, on land 25 feet above high-water mark.

The light is fixed white, elevated 43 feet above high-water mark, and should be visible 7 miles from all points of approach by water. The illuminating apparatus consists of?a?small, pressed glass lens. The lighthouse was built by Mr. Emery Taylor, of Stillwater, N.S., whose contract price was $500.

Theodore OHara was appointed the first keeper of the lighthouse at an annual salary of $150, and until the first keepers dwelling was built in 1903, he rowed to and from the lighthouse each day. OHara was still serving as keeper on November 28, 1929, when a $5,600 contract was awarded to Stewart C. MacMillan of Isaacs Harbour to build a new combined lighthouse and dwelling at Port Bickerton. The resulting lighthouse was similar to many that were built at the time, including the one that was completed at Isaacs Harbour in 1928: a square, two-storey dwelling with a lantern room centered atop its hipped roof.

In 1910, Keeper OHara was provided a hand-operated foghorn that he was required to sound in response to signals from steamers in the vicinity during thick weather. In 1948, a more powerful fog alarm, in the form of a diaphone, was added to the station. Due to the extra work this required, an assistant keeper was assigned to Port Bickerton. In 1959, Quemar Co. Ltd. of Bedford built a new one-storey dwelling, the one still on site today, at a cost of $21,825 to provide additional housing for the keepers. The dwelling portion of the lighthouse was upgraded with new plumbing at the same time.

With wooden structures on the point and woods backing the property, fire was always. Fire claimed the first lighthouse in the late 1920s. In 1947, a fire started in Fishermans Harbour, on the opposite side of the peninsula on which the lighthouse is located, but the blaze steadily worked its way west toward the station. Using seawater, residents from the community rallied to help the keepers keep the fire at bay. The lighthouse only suffered minor roof damage.

On March 28, 1962, the assistant keeper was using a blow torch to remove paint from the floor of the fog alarm building, when the oil-soaked floorboards caught fire. The assistant and Keeper Beiswanger quickly removed the fog alarm engine, a stove, and other pieces of equipment from the building, while the assistants wife rushed into town and brought back several men and a small pump to help fight the fire. The fog alarm building was completely destroyed along with the fog-alarm air tanks, but no other structures were damaged.

K.C. Current, Superintendent of Lights for the district, and A. Shortt, a marine mechanic, visited the station shortly after the fire to investigate the matter and recommended that a gas-driven fire pump be provided to all light stations. A fog alarm building, with an attached light tower, was built out of concrete, not wood, to replace the lost structure. No longer needed, the lantern room was removed from atop the 1930 lighthouse, and the roof rafters were extended to form a peak.

Commercial power reached the station in 1962, and in April 1972, an electronic horn replaced the diaphone. This change reduced the stations workload, so when Keeper Lamont Lovitt retired in 1982, Edgar Schrader, his assistant, was promoted to head keeper and the position of assistant keeper was eliminated.

The old 1930 lighthouse was going to be offered for sale in 1983 when the deputy minister of fisheries asked for permission to use the dwelling for field officers involved in the research of hatchery-reared juvenile lobsters that had been released near Bickerton Island. The request was granted and resulted in the lighthouse being saved. Hector Lowe, the stations last keeper, left in 1988, after the light had been automated.

In the 1990s, Port Bickerton Lighthouse was announced as a finalist in the site selection process for a PCB incinerator. Within days of the announcement, over 400 area residents signed a petition protesting the selection of the lighthouse site. Eileen Beiswanger, who had lived at the lighthouse for five years when her husband was keeper, was serving as a Port Bickerton councilor at the time, and she helped fight the proposal and promote efforts to turn the 1930 lighthouse into an interpretive centre.

We couldnt let the site just rot, Eileen said. When we heard there were plans to build an incinerator here, the community rallied to protect the area as a day park and protect the lighthouse. On June 28, 1997, the Port Bickerton and Area Planning Association opened the Port Bickerton Lighthouse Interpretive Centre to the public. Besides the lighthouse, with its new lantern room, the project also grew to include picnic areas, and five kilometres of hiking trails. An exhibit on the Sable gas project and statistics on Nova Scotias lighthouses have been on display in the 1930 lighthouse, while models of several Nova Scotia lighthouses have been housed in the nearby keepers bungalow.

Ownership of the Port Bickerton Lighthouse site was transferred to the Municipality of the District of St Marys in October 2012. In 2014, the keepers bungalow began being operated as a weekly vacation rental cottage and as part of an artist-in-residence programme.

For a larger map of Port Bickerton Lighthouse, click the lighthouse in the above map.

From Marine Drive, the main road in Port Bickerton, turn east onto Lighthouse Road and drive 2.1 km (1.3 miles) to its end where you will find two Port Bickerton Lighthouses. The older lighthouse is the Nova Scotia Lighthouse Interpretive Centre, which contains information on the lighthouse. Visitors are allowed to climb to the lantern room. A nearby keeper's dwelling formerly had models of several Nova Scotia lighthouses. The centre is open daily, July 1 to September 30, from 9 a.m. to 5 p.m.

When the keeper's dwelling is not being used for an Artist in Residence Programme, it is available to the public for weekly rentals.