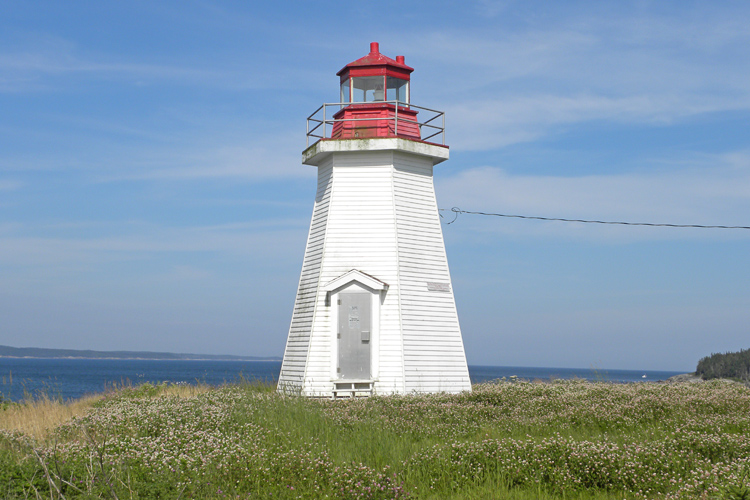 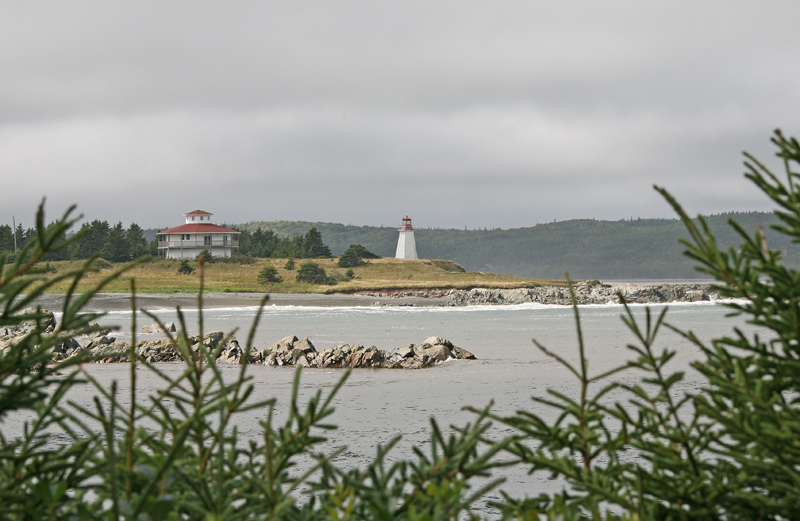 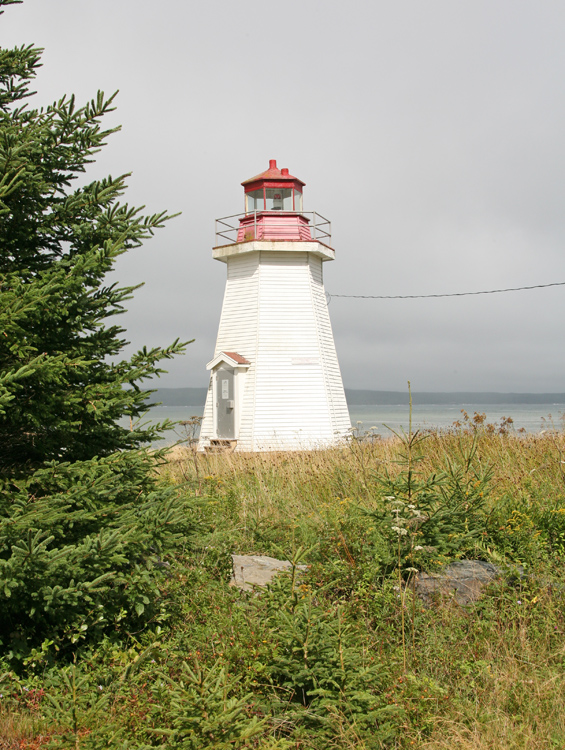 Gabarus, a small fishing village founded in 1716, is situated on the southern shore of Gabarus Bay. The entrance to Gabarus Harbour lies between Rouse Point on the east and Garbarus Point on the west. A lighthouse was built on Garbarus Point in 1890, but it wasnt until 1982 that a light and foghorn were placed on Rouse Point. In 1890, the Department of Marine announced the completion of Gabarus Lighthouse:

A lighthouse has been erected on Harbour Point, on the southern shore of Gabarus Bay, Cape Breton, for the purpose of aiding vessels navigating Gabarus Bay, and leading to a safe anchorage behind Harbour Point.

The light is fixed red, elevated 47 feet above the water, and should be visible a distance of 8 miles from all points of approach. The illuminating apparatus is dioptric, of small size.

The light building is a hexagonal wooden tower painted white, surmounted by an iron lantern painted red. It is 32 feet high from the ground to the vane on the lantern.

This lighthouse was built by Mr. Neil McNiell, under contract, and was put in operation on the 1st November. The contract price was $650, and the total expenditure in connection with construction was $748.33.

In 2007, Gabarus Lighthouse was designated a Recognized Federal Heritage Building. The heritage character statement that explains the reasons for the designation included the following on the lighthouses architectural value:

The Gabarus Lighttower is a good example of the few surviving kind of wooden, tapered, lighttower with a hexagonal configuration. The lighttower presents good proportions, and despite the loss of some of its original detailing and the addition of vinyl siding, it retains good visual qualities. Built to a standard plan prepared by the Department of Marine and Fisheries, its simple plan reveals good functional quality. With its sturdy construction, the lighttower reveals good quality of craftsmanship and materials, and has withstood the natural elements over an extended period.

Gabarus Lighthouse is the only remaining wooden hexagonal tower in Nova Scotia. Despite this, it still has not been designated a heritage lighthouse under the Heritage Lighthouse Protection Act of 2008.

The Gabarus Lightkeepers Society was formed in 2014 to raise funds to move and restore the lighthouse. The society solicited the help of political science students from Cape Breton University to draft a business plan that was needed to petition the government for ownership of the lighthouse.

During the summer of 2015, the National Trust of Canada and the Nova Scotia Lighthouse Preservation Society teamed up to run a This Lighthouse Matters campaign to determine which of twenty-six eligible lighthouse projects in the province would receive part of $250,000 in cash prizes. Over 219,000 votes were cast from around the world to determine which nine projects would be funded. One of the members of the Gabaraus Lightkepeers Society contacted every lighthouse association, group, and society that could find on the internet and asked for help in voting for the lighthouse. Gabarus Lighthouse came in second place with 21,403 votes and was awarded $50,000. This money was promptly use to move the endangered lighthouse back from the nearby eroding cliff.

On November 26-27, 2015, T&J Demeyere Properties slid the 125-year-old, 22-tonne lighthouse forty feet across metal rails, using liquid dish detergent as a lubricant, and then placed it atop a prepared foundation. Building the foundation was a bit tricky, as each corner had to be at a slightly different angle to match the lighthouse.

In 2017, members of Gabaraus Lightkepeers Society asked the Cape Breton Regional Municipality (CBRM) to accept ownership of Gabarus Lighthouse under the divestiture program offered by the Department of Fisheries and Oceans (DFO). Janet McGillen, president of the society, said the memorandum of agreement presented to the society was overwhelming and onerous, and the society declined to sign on the advice of its lawyer, despite the $40,000 one-time payment offered by DFO.

We were prepared to take responsibility for the saving and maintenance of the lighthouse but many of the conditions were contradictory and beyond reasonable expectation, McGillen said. We believe that CBRM has the experience and expertise to negotiate a more reasonable and acceptable ownership agreement for the lighthouse. The society was willing to assume responsibility for insurance and maintenance, but couldnt accept the liability terms in the agreement.

CBRM had a policy against building ownership but was open to trying to lease the lighthouse from DFO.

For a larger map of Gabarus Lighthouse, click the lighthouse in the above map.