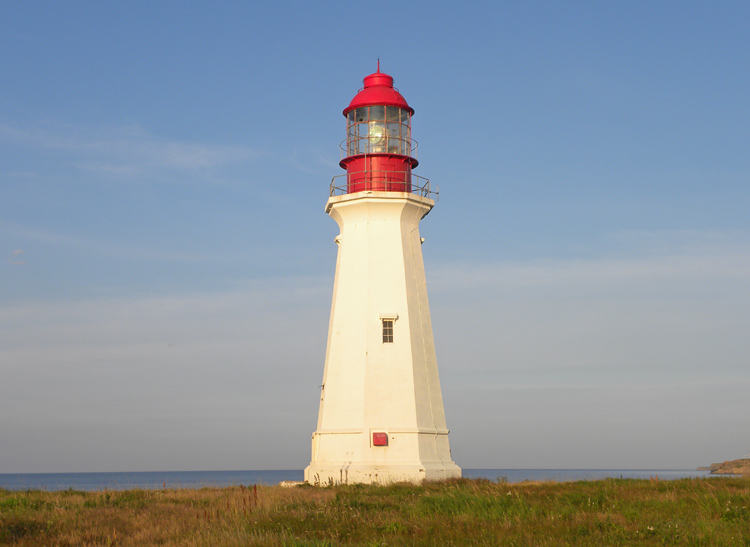 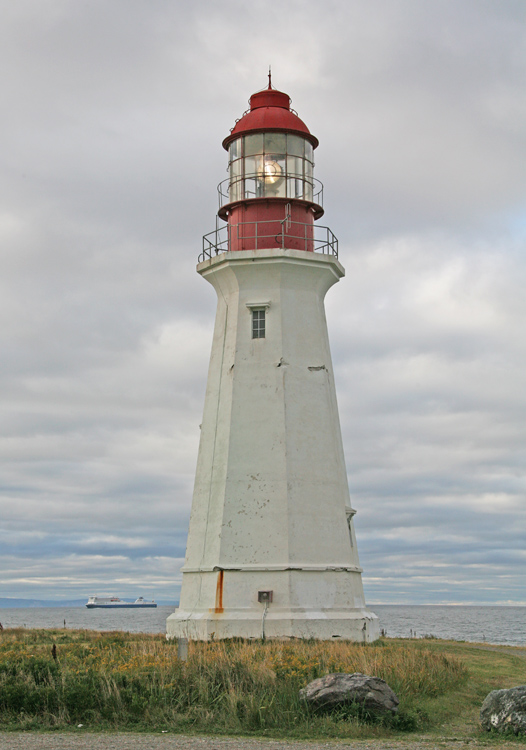 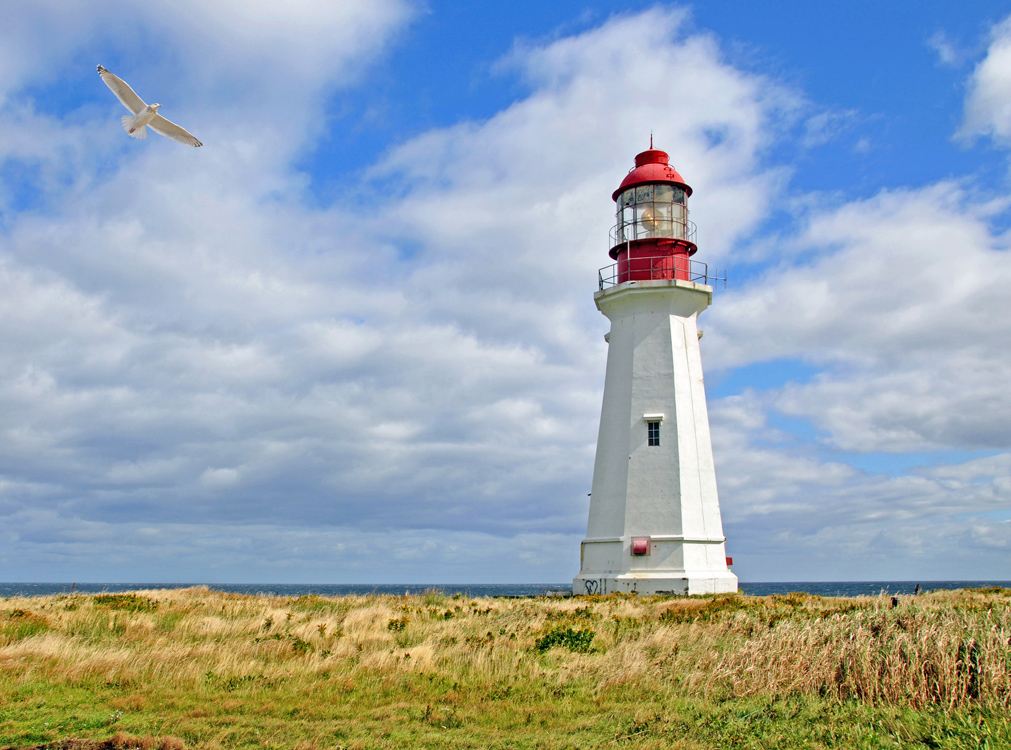 Sydney Harbour, a sixteen-kilometre-long, Y-shaped inlet, is the maritime hub of Cape Breton. Year-round ferry service to Newfoundland is offered from Sydney, and cruise ships and container ships also frequent the harbour. In 1832, Robert Gammel and others petitioned the House of Assembly of Nova Scotia for a lighthouse on Low Point to mark the entrance to Sydney Harbour. Roughly 600 vessels called at the harbour each year at the time. The legislature approved 500 pounds for the project, and when the lowest tender came in at 770 pounds, the Lieutenant Governor advanced the additional sum required so that the lighthouse could be built as soon as possible. An octagonal tower, whose sides were alternately painted red and white, was completed on Low Point in November 1832, along with a dwelling for the keeper. The lighthouse was just the ninth built by the government of Nova Scotia.

Low Point, situated on the eastern side of the entrance to Syndey Harbour, is both low and flat, making a light there even more critical. Over the years, the point has been known as both Low Point and Flat Point. Government records referred to the point primarily as Low Point up until 1908, and then switched to Flat Point in 1909. In 1953, Low Point became the official name, and that is how it appears on the Canadian Coast Guards List of Lights today.

Michael McKeagney was appointed the first keeper of the lighthouse in November 1832, but the following month he failed to exhibit the light during a heavy snowstorm, and a passing ship reported it. McKeagney didnt deny the charge. Rather, he admitted that he didnt think the it was fit for a dog to turn out that night. Robert McNab replaced McKeagney the next June and was in charge of the light until 1865. McNabs letter of appointment from the Commissioners of Lighthouses of Nova Scotia in May 1833 included the following instructions:

The house to be lighted every night at sunset and the light to be kept up until daybreak. The lamps to be trimmed at least twice during each night at such hours as will most equally divide the time. The lantern and other parts of the house to be kept clean and in good order. Any glass that may be broken to be immediately replaced. A supply of glass and putty will be furnished for that purpose.

A journal of all particular circumstances to be kept and a report to be made to the Commissioners quarterly, or more frequently if necessary, in which you are to state the quantity of oil and other materials consumed and the supply remaining on hand together with any remarks you may think necessary on the general state of the lighthouse.

You are at all time to have an assistant on the spot.

In 1833, a heavy gale of wind blew off the lantern rooms lead roof. The light was out for some time, but was placed back in service after a new iron lantern room and lamp were received. During the winter, the temperature was so cold, often dropping to twenty below zero, that the keeper found it difficult to keep the oil used in the lamps from congealing. He used pans of hot coals to try to keep the light going, but this damaged the lamps.

William Condon, Superintendent of the Board of Works, inspected Low Point Lighthouse in July 1857 and found the light to be a poor one. The lantern room was in good order, but the lamps were old and defective. Keeper Robert McNab informed Condon that it had been nineteen years since any repairs of consequence had been made to the station. After new lamps were installed the following year and repairs made to the lantern room, the light was much improved. A new lantern room was installed in 1863, but when John H. Kendrick inspected the station in 1865, he reported the lantern room was entirely too small, the sashes being very thick, and the glass too small. Given the large fleet of vessels calling at Sydney, Kendrick felt the eight lamps, set in twelve-inch reflectors, were too few in number for a light that should be second to none in the Province.

A larger, twelve-sided lantern room, which had a diameter of nearly ten feet, was finally installed atop the lighthouse in 1877. With the extra space, thirteen mammoth flat-wick burners could be accommodated. To support the larger lantern room and to keep it from causing the tower to topple over, sixty tons of ballast were placed in the bottom of the tower and an enlarged deck was installed up top. While this work was being carried out, a temporary light was shown from a tower window, sixteen feet below the lantern room. The cost of the lantern room and apparatus was $1,640.73.

In 1903, a fog alarm building was built on Low Point between the lighthouse and the keepers dwelling and marine signal flagstaff. The rectangular, wooden building stood thirty-four feet from the edge of the point and housed the equipment for a steam fog whistle. A ten-inch whistle mounted on the roof was placed in operation on January 1, 1904, giving a ten-second blast every minute when needed. The total cost for the fog alarm building and equipment was $4,600.

Low Point Lighthouse received its beautiful, circular lantern room in 1908 along with a third-order, double-flashing Fresnel lens. To receive the lantern room, a new deck had to be installed atop the tower. The Fresnel lens changed the lights characteristic from fixed white to the following pattern every five seconds: 0.25-second flash, 0.75-second eclipse, 0.25-second flash, 3.75-second eclipse. A lamp that burned petroleum vapour under an incandescent mantle was used inside the lens to produce a light of 100,000 candlepower.

A temporary building was built on the point in 1908 to house air compressors for a diaphone foghorn in order to test the desirability of replace the existing steam fog whistle. Authorities must have decided to stick with the steam whistle, as a new boiler was installed in 1914, and a second-hand boiler from Cape Forchu was installed in 1919.

The octagonal, concrete tower that stands on the point today was constructed in 1938. The lantern room and lens from the old wooden lighthouse were transferred to the new tower. In 1953, a dwelling for an assistant keeper was built and commercial power reached the station. A dwelling for a second assistant keeper was added in 1962 when a diaphone foghorn was established on the point.

After an electric horn replaced the diaphone foghorn with its oil engines and compressors in 1970, the position of second assistant keeper was eliminated. An unused dwelling was sold and removed from the station in 1977, and an old two-storey dwelling was removed in 1987, after the staff was reduced to just one keeper in 1979.

In October 1984, a rotating airport beacon replaced the Fresnel lens in the classic lantern room. James H. Jobe was the only keeper on the point from 1979 until the station was de-staffed in October 1988. James and his wife Jean leased the surviving dwelling on the point from the government and remained closed to the lighthouse for some time.

The society, formed in 2012, initially thought that erosion at the point was their top priority, but later decided that the damage the freeze-thaw cycles were having on the concrete tower needed to be addressed first. Using the money won in the competition, contractors were hired to perform a complete resurfacing of the lighthouse in 2017-2018.

For a larger map of Low Point Lighthouse, click the lighthouse in the above map.