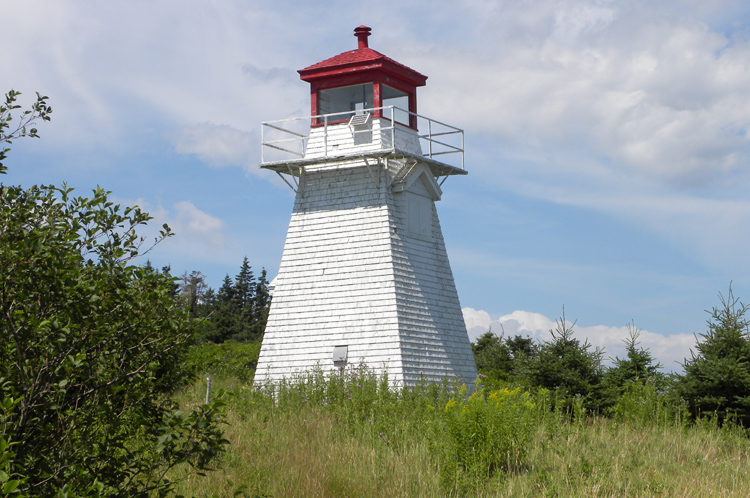 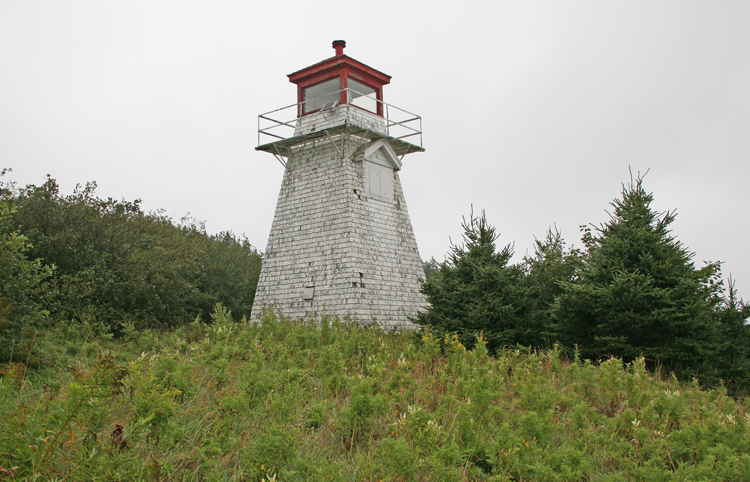 Bras dOr Lake is an inland sea in the centre of Cape Breton Island. To the north, two natural channels that run on either side of Boularderie Island connect the lake to Cabot Strait, while on the south, St. Peters Canal was completed in 1869 to link the lake to the Strait of Canso and the Atlantic Ocean. Cape George defines the transition between the main body of the lake and the northern end of St. Peters Inlet, which leads to St. Peters Canal. To mark this important point, the Department of Marine announced work on a new lighthouse on Cape George in 1874:

A light-house is now nearly complete at this point. It is situated on Cape George south side Bras d'Or Lake, on west side of entrance to St. Peters Inlet, Richmond County. It is proposed to exhibit a fixed white light from this point, 49 feet above the level of high water-mark, and which in clear weather should be seen about ten miles.

The tower is a square wooden building 20 feet high, painted white, and surmounted, with a wooden lantern 7 ½ feet in diameter, with ten sides glazed with plate glass 28 x 36 inches. Four mammoth lamps with 18-inch reflectors are provided, as well as one spare lamp. The lamps, oil and other supplies have been landed at the station, and the light can be put in operation on the opening of navigation in the spring. It is for the purpose of assisting in the navigation of St. Peters Inlet.

Mr. Duncan McRae is the builder, at the contract price of $590.

A large number of trees were felled near the lighthouse in 1875 to increase the range of visibility of its light.

Norman Murray started as the first keeper of the light on August 3, 1875, and members of his family would look after the light for the next ninety-four years, until it was automated in 1969. When Norman Murray passed away in 1882, John Murray was appointed keeper. John served for thirty years and was followed by Mrs A.M. Murray, presumably his wife. A.J. Murray looked after the light from 1924 to 1930, and he was followed by William L. Murray, who served for thirty-nine years until the light was automated.

In 1949, H.E. McDonald accepted a contract to build a new lighthouse and detached keepers dwelling on Cape George, and the work was finished in March 1950. The light atop the lighthouse was changed in 1968 from an oil lamp to an electric bulb powered by ten large single-cell batteries, and the station was declared fully automated the next year. When the stations dwelling, barn and oil store were declared surplus in 1975, former keeper William Murray purchased them and removed them from the site.

A square, skeletal tower topped by a light was erected next to the wooden, pyramidal lighthouse sometime between 2012 and 2014.

In 2020, Jonathan Wilkinson, the Minister of Environment and Climate Change, announced the designation of Cape George Harbour Lighthouse as a heritage lighthouse under Canada's Heritage Lighthouse Protection Act. The lighthouse is managed by a new, non-federal owner.

For a larger map of Cape George Harbour Lighthouse, click the lighthouse in the above map.

From Route 4 on the western shore of Bras d'Or Lake, turn north onto Pepperel Street in Saint Peters and then continue along the lake shore for 10.9 km (6.8 miles). (The road is also known as Bras d'Or Lakes Drive and then West Bay Highway.) Turn right onto Oldys Road and drive 1 km (0.6 miles), park, and then walk roughly 1 km over a hill to reach the lighthouse. In 2011, the trail was overgrown, and it was necessary to wade through water at the start of the trail.