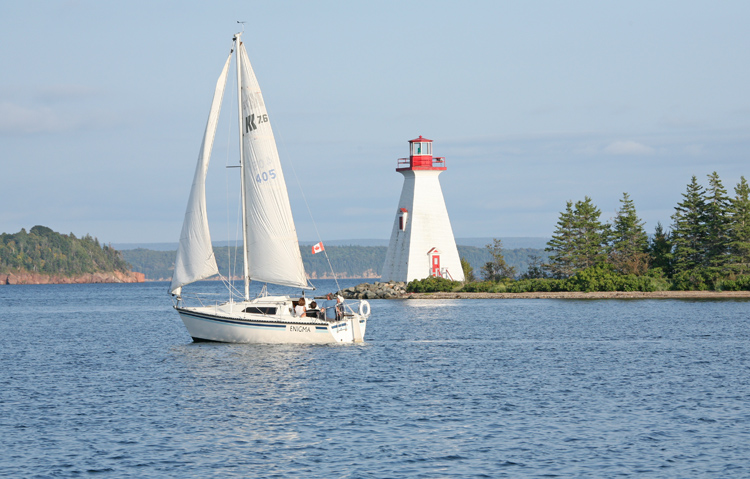 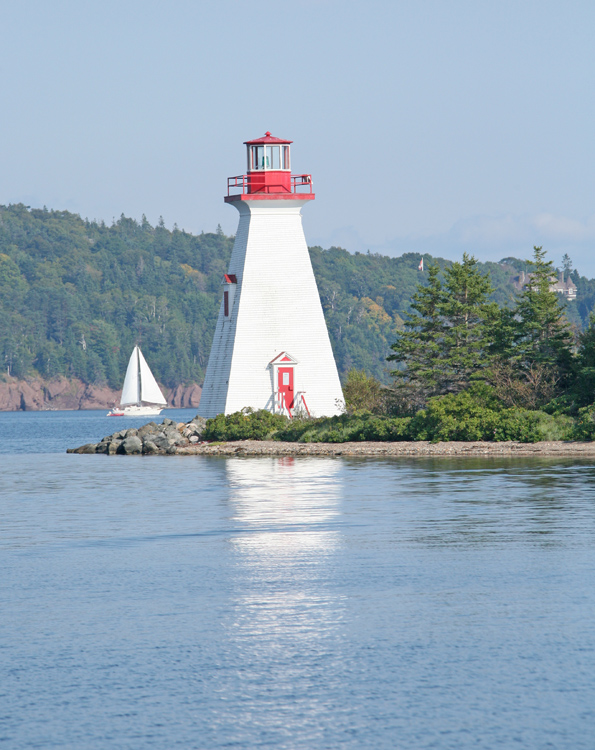 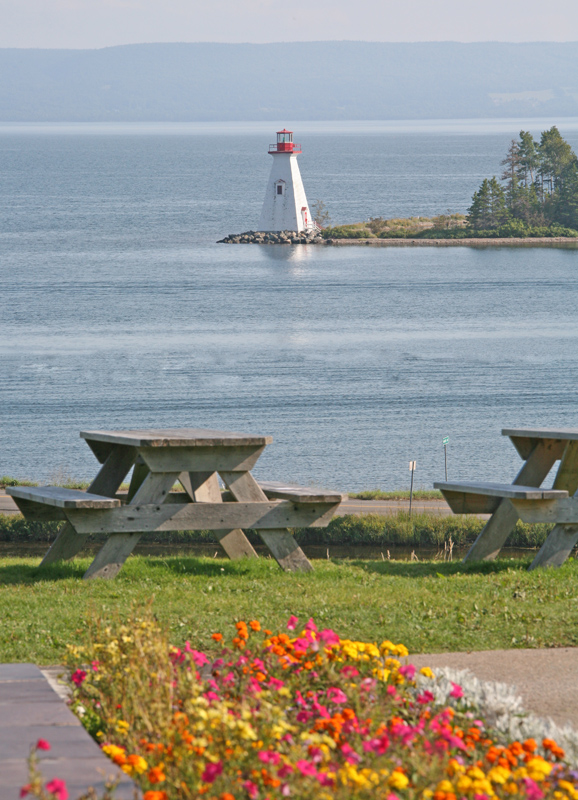 In 1819, twenty-five-year-old James Duffus, a former naval officer, established a home and mercantile business on Mutton Island, just offshore from what is now Baddeck, to serve the settlers at River Baddeck and Grand Narrows. Sir Samuel Cunard, founder of the Cunard Line of steamships, was James brother-in-law and had encouraged him to go into the mercantile business with his brother William. James Duffus applied for 400 acres on the mainland near his island home in 1820 and received the grant in 1824.

James went to Halifax for medical attention in 1833 and died there. His assistants carried on the mercantile business until 1836, when the executors of Duffus estate sent William Kidston to the island. Kidston ended up marrying Margaret Ann Dufus, James widow, and in 1840, he moved the mercantile business to the nearby mainland and became an important figure in Baddeck, serving as county treasurer, justice of the peace, and a representative in the Nova Scotia House of Assembly.

In 1875, the Department of Marine announced the completion of a lighthouse on Kidston Island to serve Baddeck Harbour:

A new light tower has just been erected on the north-east point of Kidstons Island, at the entrance to Baddeck Harbour, on the north side of the Bras dOr Lake, Victoria County, and will be put in operation on 8th November next. The lantern is of iron, five and a half feet in diameter, and the building is a small square tower painted white, without a dwelling, the keeper living at his own house in Baddeck.

The light is a fixed red elevated thirty-one feet above the level of high water, and in clear weather should be seen a distance of about seven miles. The lighting apparatus consists of three flat-wick lamps with 17-inch reflectors, and is for the purpose of guiding vessels into Baddeck Harbour. It will be put in operation on the 8th November, 1875. The contract for the building was awarded to Mr. Neil W. McKenzie for the sum of $674, and Mr. Donald McRae was appointed keeper, at an annual salary of $200, this to include allowance for a boat.

After E. Chanteloup was paid $561.90 for the lantern room and lighting apparatus, B.E. Tremaine was reimbursed $150.53 for purchasing the site and recording the deed, and other accounts were settled, the total cost of the lighthouse came to $1,474.63. Shortly after the lighthouse was completed, the keeper was given a boat, and a well was dug on the island. In 1878, the shelf on which the lamps were mounted was raised six inches to bring the burners into the centre of the lantern room glass. A detached oil store was finally built in 1885, so the oil did not have to be stored in the lighthouse. A fourth-order, 270° Fresnel lens replaced the catoptric illuminating apparatus in the lantern room in 1909.

In 1911, L. Mury of West Arichat built a new fifty-foot-tall, square, wooden tower to replace the original lighthouse on Kidston Island, and Victoria Foundry Co. of Ottawa supplied the octagonal lantern room for the new tower for $626.50. The new tower was much taller than its predecessor and raised the focal plane of the light from thirty-one feet to forty-eight feet.

Alexander Graham Bell, his wife Mable, and their two young daughters, arrived in Baddeck via St. Peters Canal in 1885 and fell in love with the place. In 1892, Bell started construction of his turreted, thirty-two room summer house on their estate overlooking Baddeck that they called Beinn Bhreagh, Gaelic for beautiful mountain. The Bells spent most summers at their Baddeck estate, where Alexander had a laboratory. While at Baddeck, Alexander conducted experiments with tetrahedral kites, hydrofoils, aircraft, and sheep breeding.

Keeper McRae most likely witnessed some of these experiments that were conducted on Bras dOr Lake. Bells associated John A.D. McCudry flew Bells Silver Dart airplane from the ice of Baddeck Bay on February 23, 1909, in what was the first controlled powered flight in Canada. Bells hydrofoil HD-4 set the world watercraft speed record in 1917 when it travelled across Baddeck Bay at seventy-one miles per hour  a record that lasted for twenty years. Alexander Graham Bell died at Beinn Bhreagh in 1922 and was interred on the property, which is still owned by the family.

Alexander Graham Bell National Historic Park is located in Baddeck and features a museum that houses many artifacts donated by the Bell family along with a full-scale replica of the Silver Dart and a model HD-4 hydrofoil.

The Village of Baddeck acquired Kidston Island in 1959, and it leases it to the local Lions Club that operates a ferry to the island during the summer. The original Kidston Island Lighthouse was going to be demolished after a replacement tower was built in 1991, but for some reason it was left standing. It was finally destroyed in 1959, after it had fallen into disrepair.

The village assumed ownership of Kidston Island Lighthouse in 2005, and in 2014 it re-shingled and painted the lighthouse.

For a larger map of Kidston Island Lighthouse, click the lighthouse in the above map.

Take Highway 105, the Cabot Trail, to Baddeck and then drive to the marina where you can get a view of Kidston Island Lighthouse. During July and August, the local Lions Club operates a pontoon boat that serves as a shuttle to Kidston Island.

A great way to get a close-up view of the lighthouse is with a cruise aboard the Amoeba, which will also give you a great view of Beinn Bhreagh, Alexander Graham Bell's mansion.

The lighthouses is owned by the Canadian Coast Guard. Grounds open, tower closed.


When in Baddeck, I would highly recommend a visit to the Alexander Graham Bell National Historic Site. I read a biography on Alexander Graham Bell before my visit, and it was fun to see some of his experiments in person. A decent view of Kidston Lighthouse can also be had from the museum.