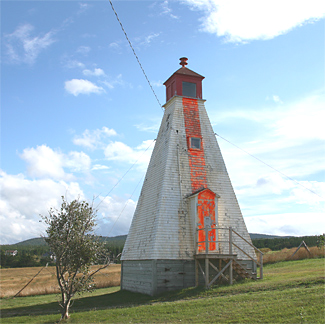 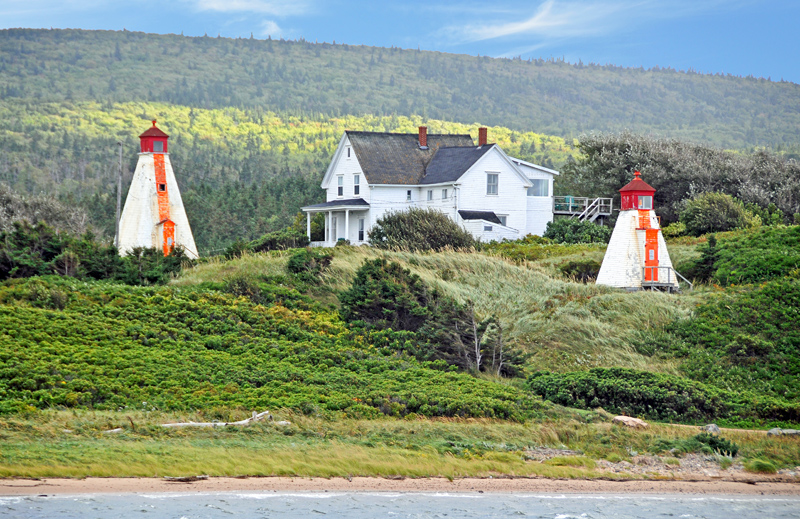 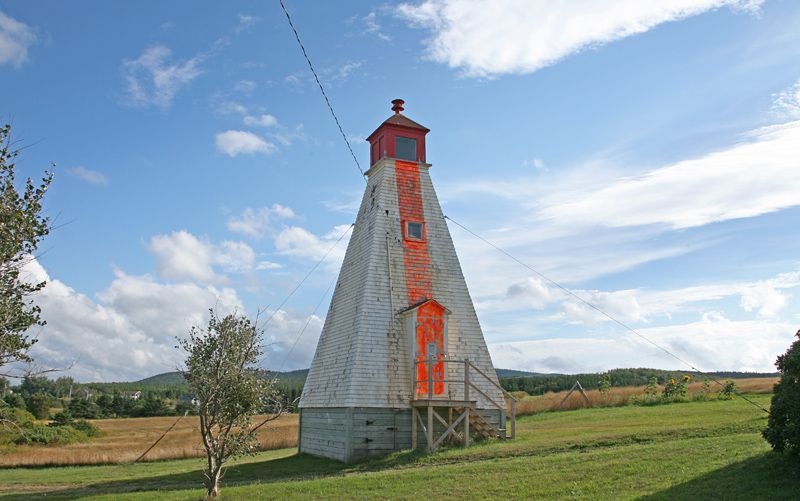 Margaree Harbour is situated at the mouth of Margaree River on the west coast of Cape Breton island, about twenty kilometres northwest of Port Hood. The entrance to the harbour was originally through an intricate channel that was obstructed by a bar of shifting sand, over which there was less than two metres of water at low tide. To improve access to the harbour, the provincial government constructed a pier on the southwest side of the harbour entrance. This work was repaired and extended in 1876 and 1879. In 1880, two small beacon range lights, shown from lanterns elevated on posts about twenty-five feet high and 130 feet apart, were put in place to guide mariners into the harbour. John McFarlane was given an annual allowance of $60 to look after the lights.

In 1885, Duncan McFarlane of Margaree constructed a small wooden tower on the outer end of the breakwater pier under a contract for $254. This square tower was painted red and measured twenty-one feet from base to vane. John McFarlane placed this lighthouse in operation on October 10, 1885, and the two small ranges lights he had kept previously were discontinued. A fixed red light was shown from the seaward side of the pier lighthouse, which faced north, while white lights were shown from the eastern and western sides of the lantern room. To remain in the channel on entering the harbour, mariners were told to keep the eastern light close aboard in passing the lighthouse.

The Department of Marine decided to switch back to range lights to guide mariners into Margaree Harbour and announced the following change in 1901:

The front light is a fixed red light, elevated 75 feet above high-water mark, and should be visible ten miles in, and over a small arc on each side of, the line of range. The illuminating apparatus is catoptric. It is shown from a wooden tower, square in plan, with sloping sides, which stands 169 feet back from high water mark on the bank facing the entrance to the channel. The tower is 22 feet high from its base to the vane on the lantern, and is painted white.

The back range light is a fixed red catoptric light, elevated 105 feet above high water mark. It should be visible ten miles in, and over a small arc on each side of, the line of range. It is shown from a wooden tower, square in plan, with sloping sides, erected 215 feet, S. by W. (S. 14° 20' E. true) from the front tower. It is 33 feet high from its base to the vane of the lantern, and is painted white.

The buildings were erected by the department under the supervision of Mr. A. McLellan, at a cost of $1,062.95.

Alexander McFarlane was in charge of the light on the breakwater pier from 1886 to 1901, but with the establishment of the new range lights, a separate keeper was hired for each of the new towers. Nicholas Daigle served as the first keeper of the front range light, and Roderick McLellan was hired as the first keeper of the rear light. Each of the men was paid an annual salary of $50. The range lights were converted to electric power in 1963 when large, single-cell batteries were installed in the towers. Official keepers were no longer required, but John L. MacKinnon, Jr., who had been serving as the keeper of the front light since 1952, was appointed caretaker of the lights. He served in this role until 1970, when the range lights were connected to commercial power.

In 2012, local citizens came together to form Margaree Harbour Heritage Lighthouse Group to protect the communitys cherished range lights and apply for ownership of them. The group entered the range lights in This Lighthouse Matters, a crowdfunding competition sponsored by National Trust for Canada and the Nova Scotia Lighthouse Preservation Society in 2015. Twenty-six lighthouses in Nova Scotia competed for online votes in three different categories: High Tide, Ebb Tide, and Low Tide. The top three vote-getters in each category were given monetary awards that totaled $250,000. Margaree Harbour Range Lights did not end up in the top three in the Ebb Tide category, but they did earn $3,590 in the fundraising portion of the competition, where every donation to those lighthouses that didnt win a cash prize was matched, dollar-for-dollar, up to $10,000.

As part of the planned divestiture of the range lights, the government removed lead-contaminated soil from around the perimeter of each of the towers in October 2017. In March 2018, a powerful windstorm tore a hole in the rear tower. The lighthouse group notified the Coast Guard, and a repair crew arrived by helicopter the next day to patch the tower so the interior would not suffer water damage.

In June 2018, the Coast Guard started a major renovation of the rear tower. Shingles and old sheathing were first removed, and then a waterproof-but-air-permeable membrane was applied, followed by a new layer of plywood sheathing that was later painted white. The Coast Guard had initially planned to restore the rear tower, but they ended up applying the same work to the front tower when they discovered it was rotting. The lighthouse group plans to reshingle the towers once they receive ownership.

On May 23, 2019, Margaree Harbour Front and Rear Range lighthouses became protected under the Heritage Lighthouse Protection Act. A press release accompanying the announcmenet of the heritage designation contained the following quote by Rodger Cuzner, Member of Parliament for Cape Breton  Canso: Lighthouses have long graced Canadas rugged coastlines and majestic shores. The Margaree Harbour Front and Rear Range Lighthouses are treasured symbols of the Margaree Harbour community. These heritage lighthouse designations will ensure that these lighthouses will be protected for generations. I am proud to recognize the designation of these navigational aids that have supported commercial fishing and recreational boating in Nova Scotia.

For a larger map of Margaree Harbour Range Rear Lighthouse, click the lighthouse in the above map.


After photographing the range lights, I met this red fox just down the road. Seems like it must be a community pet as it didn't have much fear of people.