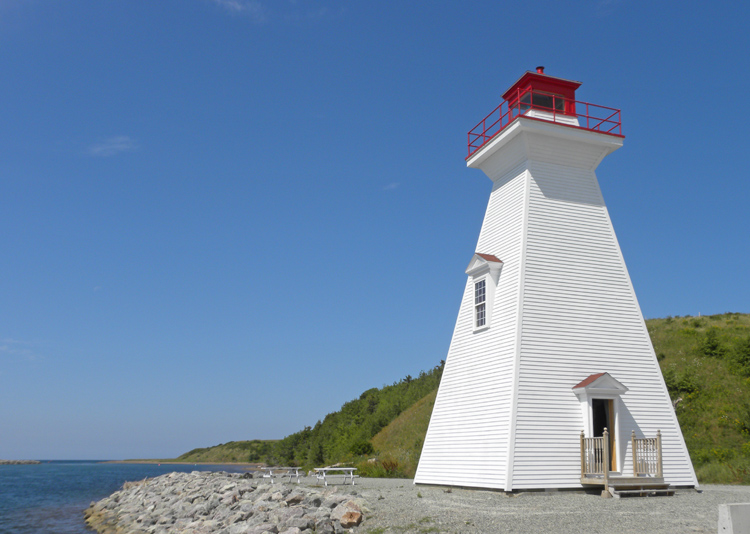 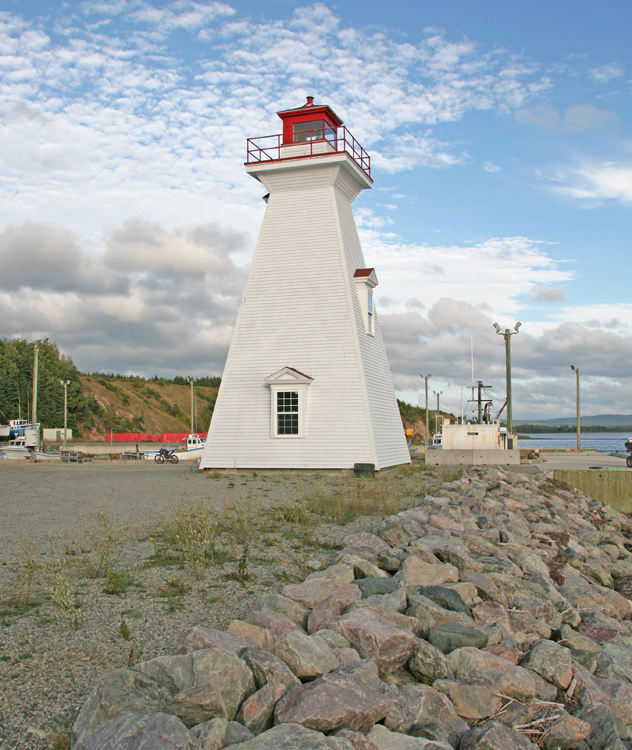 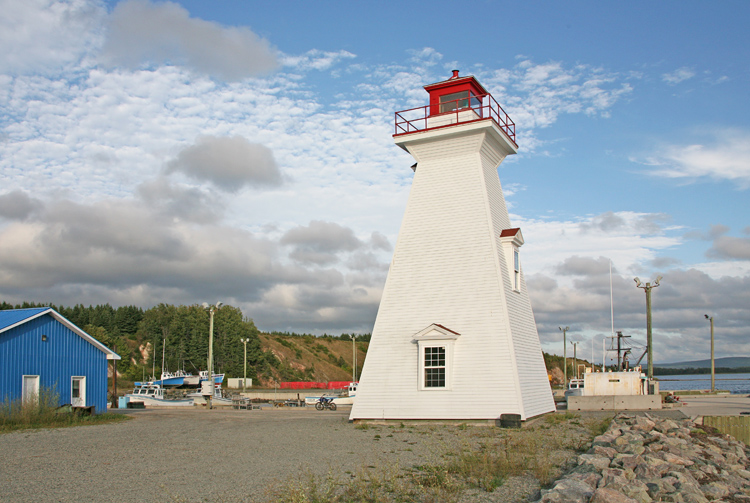 Before reaching the waters of the Gulf of St. Lawrence, Mabou River widens and resembles a mountain lake for a distance of about five kilometres. The Southwest Arm of Mabou River and Becket River also contribute water to this lake-like harbour that once served vessels calling for gypsum and coal.

The natural entrance to Mabou Harbour was an intricate channel obstructed by a bar over which there was only four feet of water at low tide. In 1872, work began on a 753-foot-long pier on the south side of a new straight channel that was dredged into the harbour. This work was completed four years later, and the former channel was closed.

The Department of Marine announced the completion of a set of range lights to mark the entrance to Mabou Harbour in 1884:

Two range lights were erected at the entrance to Mabou Harbour, in the County of Inverness, Cape Breton, and were put in operation on the 15th July. Each of them is shown from a small dioptric lantern, hoisted on a mast, with a shed painted white at its base.

The outer or front light is fixed white, and stands on the outer end of the breakwater pier, on the south-west side of the dredged channel. It is elevated 25 feet above high-water mark, and should be visible 9 miles from all points seaward.

The inner light is fixed red, and is distant 3,000 feet from the front one. It stands on the shore at McFayden's Wharf, is elevated 30 feet above water, and should be visible 7 miles. The two lights in range lead directly into the harbour, through the dredged channel, past the pier or breakwater.

In 1892, the outer or front light was removed from the south pier to a place of safety at the close of navigation due to the dilapidated condition of the pier. The mast light was placed in a proper position at the opening of navigation the next spring, but then a gale on the night of November 14, 1904 swept it from the pier. A temporary pole light was used until a more permanent structure was put in place.

E.C. Embree of Port Haskesbury was awarded a $2,450 contract to replace the mast lights with enclosed towers in 1908. Each tower was a square, wooden building, with sloping sides and surmounted by a square wooden lantern. The front tower stood thirty-three feet tall, while the rear tower was forty-seven feet tall.

A storm in December 1964 tore most of one wall off the front range tower. The following spring, a red steel skeletal tower was put in place to exhibit the front light, and the wooden tower was demolished. The rear light was electrified in August 1966 and made unwatched. The front light was discontinued on November 9, 1987, leaving the tall tower at the wharf to guide mariners into the harbour by itself.

In 2006, the wooden tower, built in 1908, was declared a Recognized Federal Heritage Building partly due to its architectural value:

The Mabou Lighthouse is good example of a square-tapered lighttower with a flared or coved cornice, and is characterized by a slender, elegant composition, as well as classical proportions and details. The design of the Mabou Lighthouse, although somewhat atypical for a range light which is usually smaller and simpler, is consistent with the standard lighthouse plan developed by the Department of Marine and Fisheries and commonly used for harbour or minor coastal lights. The square-tapered tower design features a wide base simple interior layout, and is a sturdy, economical structure constructed of solid, durable, good quality craftsmanship and materials.

For a larger map of Mabou Harbour Lighthouse, click the lighthouse in the above map.

From Route 19, the Ceilidh Trail, on the east side of Cape Breton, turn west onto Mabou Harbour Road, just north of Mabou Station, and travel 6.7 km (4.2 miles), then turn left onto a gravel road to reach Mabou Harbour, where you will find Mabou Harbour Lighthouse.


If you are passing through Mabou, I would recommend a stop at The Red Shoe Pub. I was only able to stay for twenty minutes or so, but the music I heard during that time was one of the highlights of my trip to Cape Breton.