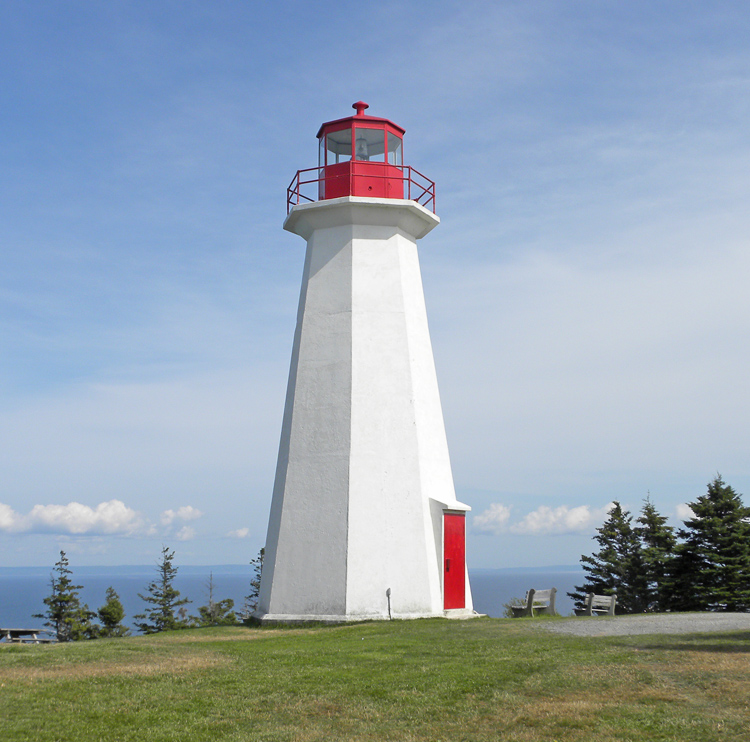 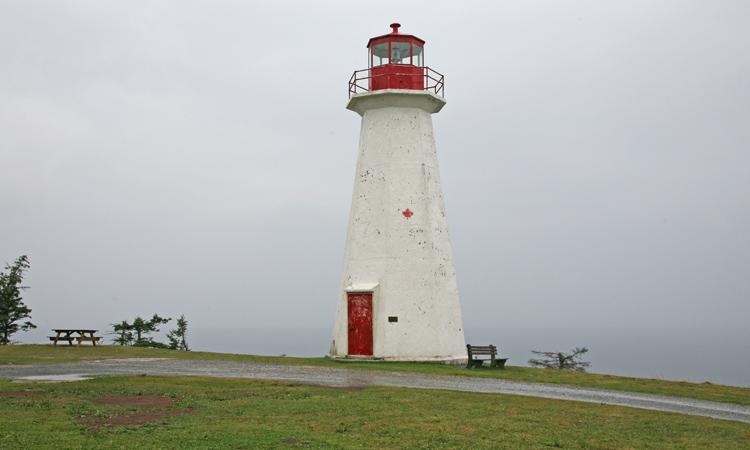 Cape George is a lofty headland that rises to a height of nearly 183 metres and defines the northwest entrance to St. Georges Bay. This spacious bay, lies between the Nova Scotia mainland and Cape Breton Island, and its southern end connects to the Strait of Canso.

In 1840, the Lighthouse Committee of the House of Assembly of Nova Scotia recommended that the petition of Robert McDonald for a lighthouse on Cape George should be complied with, but not before a survey of the coast was made to determine if it were the most eligible site. As a result of the survey, a lighthouse, known as North Canso Lighthouse, was built on the west side of the northern entrance to the Strait of Canso instead of on Cape George. Petitions from inhabitants of Pictou and Arichat for a lighthouse on Cape George were presented to the House of Assembly in 1860, and the following year, a dwelling topped by an octagonal iron lantern room was built on the cape.

David Condon was appointed the first keeper of the stations flashing light, which was produced by a revolving frame that had three lamps backed by twelve-inch reflectors mounted on each of its two triangular faces. In 1866, Thomas P. Jose, the superintendent of lighthouses for the province, recommended that the light be changed to a fixed on as in heavy gales the lighthouse shook so much that it was hard for the keeper to make the lighting apparatus revolve regularly. Instead of changing the light, additional supports were added to the lighthouse for security against the storms which blow over the Cape in fearful gusts. In 1885, wire-rope stays were fitted to the lantern to prevent its vibration during heavy storms.

Keeper Condon wrote a letter to Sir John Thompson, the MP for Antigonish, in 1881, asking for an extension of his years served for superannuation purposes. The job of keeper had take a tole on Condon as he noted in the letter:

Sometimes in heavy gales the machinery will not work owing to the shaking of the building, and I am then obliged to sit on the metal floor of the Lantern and turn the machinery by hand. Owing to this, I have contracted Chronic Rheumatism and Bronchitis, and my health is otherwise very much impaired. My wifes health is also very much broken down, and she thinks she can no longer remain to battle with the storms of this wild place  six years ago she received so many frights that she became insane, and remained so for eight months and altho God in His Mercy restored her reason she is still very excitable and terrified in heavy storms, and I am often afraid of a return of the same affliction. I would have left here years ago if I could have seen my way clear to support my family anywhere else, but as my salary is so small it was impossible to save anything out of it, and I had not the courage to face the world without a dollar.

David Condon retired in 1882, and his son Joseph was placed in charge of the light. Hugh McDonald took over in 1889, and he was followed in 1898 by Alex McEachern.

The illuminant for the new light was petroleum vapour burned under an incandescent mantle. The lights powerful flash was visible at Cape Bear on Prince Edward Island, over forty-five kilometres away. Electrical power finally reached the station in 1954, allowing a 500-watt bulb to be used inside the lens.

On October 12, 1967, Northumberland Construction Ltd. was awarded a contract to build a reinforced-concrete tower for Cape George. The new lighthouse was placed in operation on June 6, 1968, and as the light was automated, Keeper William W. Clark, who had been in charge of the light since 1951 was allowed to retire.

The lantern room and Fresnel lens were removed from the old 1908 lighthouse and taken away. The now headless wooden tower was to be demolished as part of the contract for the new lighthouse, but instead North Antigonish County Tourist Co-Op Ltd. leased the land with the old tower and dwelling hoping to turn the site into a tourist attraction. This project never materialized, and the buildings were bulldozed on September 7, 1978.

Cape George Lighthouse was declared a heritage lighthouse under the Heritage Lighthouse Protection Act of 2008 in part because it is a very good example of an octagonal, tapered, reinforced-concrete lighthouse built using a standard plan that was favoured in the twentieth century. The lighthouse was transferred to the local community in 2016.

For a larger map of Cape George (Antigonish) Lighthouse, click the lighthouse in the above map.

From Highway 4 in Antigonish, go north on West Street for 1 km (0.6 miles) and then continue on Main Street, which will become Route 337, for 34.5 km (21.6 miles) as it hugs the shoreline along Cape George, and then turn right onto Lighthouse Road. Cape George Lighthouse is located at the end of 0.8-km-long (half-mile-long) Lighthouse Road.

A third-order Fresnel lens, reportedly from a lighthouse on Prince Edward Island, is on display at Bluefin Tuna Interpretation Centre in nearby Ballantyne's Cove.

The lighthouse is owned by the Canadian Coast Guard. Grounds open,