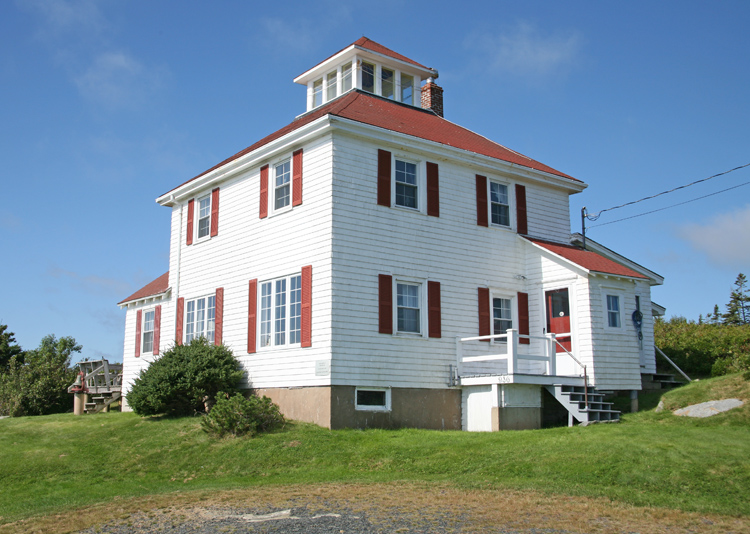 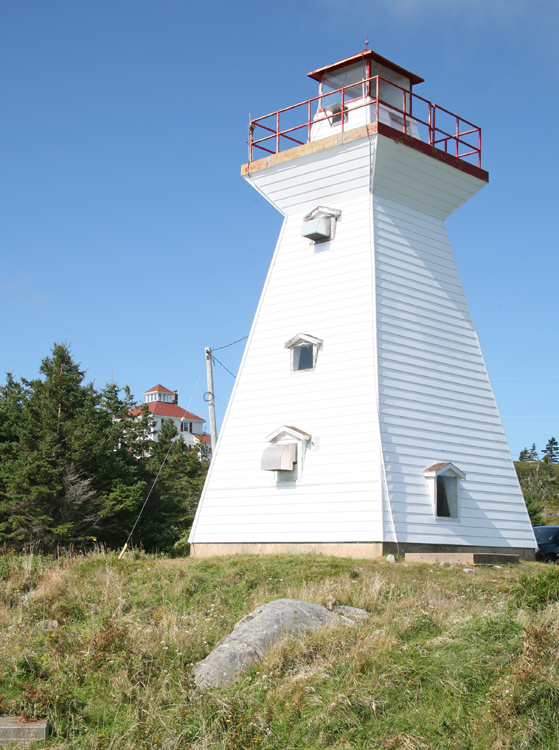 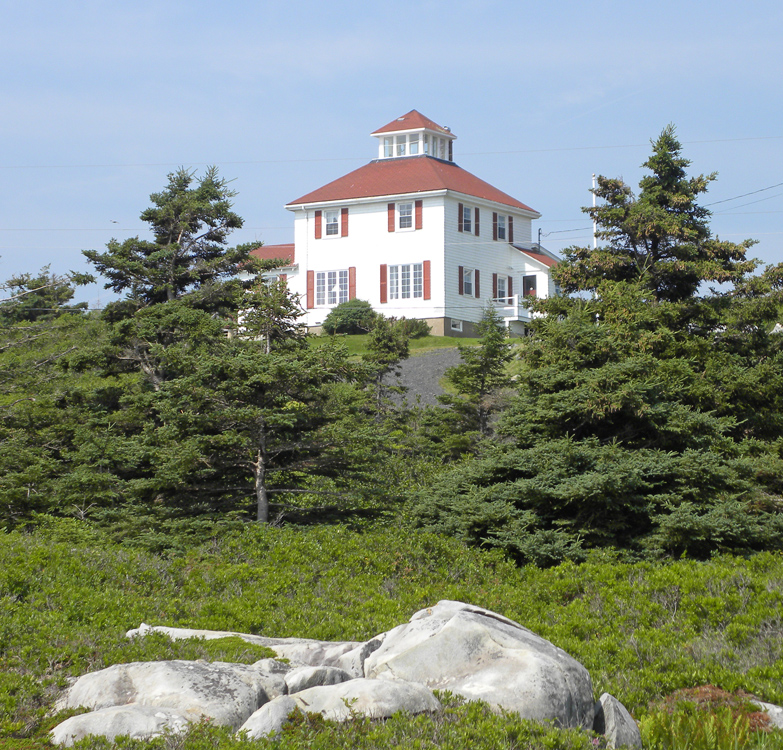 Port Medway is situated near the mouth of Medway River, a significant waterway that extends inland for many kilometres. Loyalists from Massachusetts settled Port Medway in the mid-eighteenth century and established significant logging, shipbuilding, and fishing industries. At its peak, Port Medway boasted six wharves and a population of over 5,000, but when the industries declined, so did the population.

In 1849 and 1850, a petition from the inhabitants, merchants, and mariners of Port Medway asking for the erection of a lighthouse on the western headland at the entrance to Port Medway Harbour was read in the House of Assembly of Nova Scotia. The legislature allocated two thousand pounds for the construction of six lighthouses in 1850, including a beacon light at Port Medway. Isaac K. Perry served as the first keeper of the lighthouse from 1851 until his death in 1853 at the age of just forty-seven. Twenty-three-year-old Elson Perry replaced his father as keeper at served for nearly forty years.

H.W. Johnston, agent of the Department of Marine and Fisheries for Nova Scotia, provided a detailed report on Port Medway Lighthouse in 1874:

The lantern here is a three-sided window with iron sashes, glazed with ordinary 17 x 11 inch glass projecting from the top of the dwelling. The side looking inshore is dark, and the lighting apparatus consists of four A lamps with three 12-inch reflectors, another lamp and reflector is required and will be furnished. The year's consumption of oil was 160 gallons, and the station was inspected on 2nd May, and 176 gallons of oil delivered. Four iron oil tanks are supplied. Besides the light-house, which also contains the keepers dwelling, there are two buildings, 25 x 15 and 22 x 11, respectively; one is used for an oil-store and the other for a boat-house, wood-shed, &c. A boat 13 feet long is provided. The light-house was painted in 1872, but some repairs were required, and the chimney should be rebuilt from the lower floor; at present it rests on the chamber floor, straining the building and causing leaks. Mr. Elson Perry was appointed keeper in November, 1853.

The lighthouse was painted white, but had black squares on its seaward facing sides to make it more readily visible. In 1859, Keeper Elson Perry purchased a twelve-acre lot adjacent to the lighthouse that had a landing place to prevent it from falling into other hands. Wiliam Condon, Superintendent of Lighthouses of Nova Scotia at the time, recommended that the Board of Works purchase it from Keeper Perry, who was willing to sell it for seven pounds, the same amount he had paid for it.

In 1927, a new lighthouse was built at Medway Head in the form of a square, two-storey dwelling, with an octagonal lantern room centered atop its hipped roof. Lighthouses using the same design were also built at Country Island, Green Island, and Guyon Island in 1927.

Keeper Douglas R. Smiley and his wife Muriel moved into Medway Head Lighthouse in 1959. The Smileys must have been surprised to find that the dwelling lacked inside plumbing and central heating. Muriel Smiley recalls that on November 22, 1963, the day President John F. Kennedy was assassinated, carpenters and plumbers arrived to update the dwelling with modern facilities. On October 9, 1964, cement was poured for a new dwelling at the station, and the Smileys moved into this four-bedroom residence in February 1965.

The Smileys began their lighthouse career at Beaver Island, and then after Douglas drove trucks for seven years, they returned to lighthouse keeping at Beaver Harbour Head, where they arrived in 1952 with four kids. Seven years later, when they left for Medway Head, they had eight children, and by the time their service was over, they had raised a total of fourteen children.

On April 10, 1966, Department of Transport workers installed a new fibreglass tower on a cement pad to replace the 1927 lighthouse. This circular tower was white with a red band around its middle and another one near its top.

The 1927 Medway Head Lighthouse was sold in 1980 to Alden Wamboldt of Massachusetts, who was required to remove the structure from the property. Fortunately, the lighthouse was moved just a short distance from its original site to a hill overlooking the station, allowing visitors to easily photograph two lights in one picture.

On April 19, 1983, the present wooden, pepper-shaker tower replaced the fibreglass tower, and three years later, the station was de-staffed following the retirement of Douglas Smiley after twenty-eight years at Medway Head. Douglas Smiley passed away in 1988 at the age of sixty-four, but Muriel was still regaling people with the stories of her life at a lighthouse as late as 2007, when she shared her experiences with a gathering of over fifty members of the Liverpool Seniors Club.

Alden and Roberta Wambolt had a memorial sign installed on the current lighthouse to honor the keepers of Port Medway. It reads:

A ceremony held at the lighthouse on June 11, 2014 celebrated the transfer of the tower and property on which it stands to Medway Head Lighthouse Society. Substantial repairs were made to the lighthouse in 2015. Rotting wood was replaced, and new siding was installed.

The society entered the lighthouse in This Lighthouse Matters, a crowdfunding competition sponsored by National Trust for Canada and the Nova Scotia Lighthouse Preservation Society in 2015. Twenty-six lighthouses in Nova Scotia competed for online votes in three different categories: High Tide, Ebb Tide, and Low Tide. The top three vote-getters in each category were given monetary awards that totaled $250,000. Medway Head Lighthouse did not end up in the top three in its category, but it did earn $4,600 in the fundraising portion of the competition, where every donation to those lighthouses that didnt win a cash prize was matched, dollar-for-dollar.

Funds to maintain the lighthouse are raised through a popular Art and Craft Show and Sale held each August. The society opened the lighthouse on Mondays, Wednesdays, Saturdays, and Sundays between 11 a.m. and 3 p.m. during the summer of 2019. Over 1,000 people visited the lighthouse, with about half hailing from Nova Scotia.

For a larger map of Medway Head (1927) Lighthouse, click the lighthouse in the above map.

Take Exit 17A from Route 103 and head south on Port Medway Road toward Port Medway. Follow Port Medway Road for 7.1 km (4.4 miles) until the roads ends in Port Medway, and then turn right onto Long Cove Road. If you bear to the left at this point, you will be at Port Medway Lighthouse. Continue along Long cove Rd for 4.6 km (2.9 miles) to reach Medway Head Lighthouse. The last 2.4 km (1.5 miles) is on a gravel road.