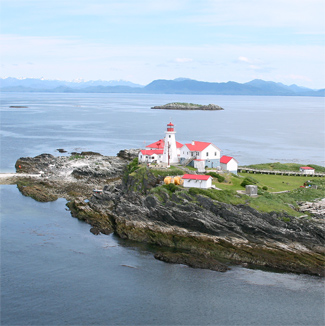 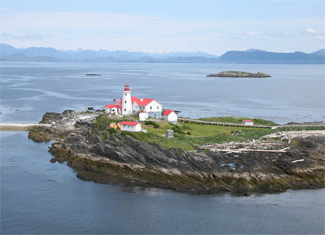 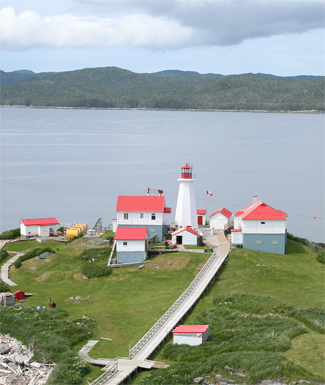 On September 2, 1905, the Victoria Daily Colonist announced that construction would start on Green Island Lighthouse within ten days, with completion expected before the dirty weather sets in. Situated just south of the Alaska border, Green Island Lighthouse would be the most northerly in British Columbia and was built to guide shipping to and from Skagway and other northern destinations.

The need for a lighthouse on Green Island, which lies just east of the Dundas Islands and in the direct track of vessels sailing along the Inside Passage, was brought to the attention of the Department of Marine by a shipwreck on January 2, 1902. Under the command of Captain James McIntyre, the steamer Bristol was carrying 2,500 tons of coal from Vancouver Island to the Treadwell mine in Alaska when it ran aground on Green Island during a southeast gale. Twenty-one of the vessels crew escaped in lifeboats and were picked up by the steamer Cottage City, but the captain, pilot, chief engineer, and four other men drowned.

After having inspected the site for Green Island Lighthouse, Colonel William P. Anderson, Chief Engineer for the Department of Marine, returned to Victoria and made the following statement to reporters: There is a lighthouse now under construction on Green Island, Chatham Sound, and this will be found useful by navigators on the Alaska route. If ever there is a city in the north and boats sail from there to the Orient, this light will also be on the route.

Green Island Lighthouse was built on the southwest point of the island and consisted of a one-and-a-half-storey frame dwelling with a square tower rising from one of its corners. The tower measured forty-four feet tall from its base to the top of its circular iron lantern room, which, along with the third-order Fresnel lens it housed, was manufactured by Barbier, Benard & Turenne of Paris. Equipped with eight flash panels, the lens revolved once every forty-five seconds to produce the alternating sequence of a 0.787-second flash and a 4.838-second eclipse. The lighthouse was built by day labour under the superintendence of George Forrest and cost $8,775.20

William A. Bosdet and Stephen Baker were transported from Victoria to Green Island via Port Simpson to serve, respectively, as the first keeper and assistant keeper of the lighthouse. Something must have occurred during the voyage north, as each man was awarded $20 as reimbursement for damage caused to provisions required at the light station while in transit. Keeper Bosdet was in charge of the light for just a year before Stephen Baker succeeded him and began his three-year stint as head keeper.

In the fall of 1909, the Quadra was nearly a month overdue in delivering supplies to Green Island. Keeper Baker and his family were forced to subsist on cornstarch and bread, and when the oil supply for the light ran out, they drained the final drops from the household lamps to keep the light burning one more night. The next night, the tug Gollah, bound for Cordova, Alaska with 2,300 tons of coal undertow on the barge Quatsino, ran aground on light-less Green Island.

As the Gollah was equipped with wireless, Captain Bailey sent out a distress signal, which was promptly answered by the H.M.S. Egerin, a warship engaged in hydrographic work nearby. The Egerin was able to refloat the Gollah, but the heavy laden Quatsino had to be left behind, after its crew was safely removed. Before sailing away, Captain Bailey generously supplied Keeper Baker with coal oil for the lighthouse and food from his ships stores. Had it reached Green Island with supplies just two days before it finally did, the Quadra could have prevented the accident.

Alexander Dingwell, who served as head keeper from 1910 to 1918, sailed from Newfoundland around Cape Horn to Canada at the age of fourteen and later worked in the gold rush and as a whaler. Before becoming a keeper on Green Island, Alex married Eva Harris of Victoria and had three children. Thelma, the oldest child, was left in Victoria with an aunt so she could receive a good education, and a fourth child was born to the Dingwells while on Green Island. Eva Dingwell would often tie her children to the station's clothesline to keep them out of trouble, but one day Fred, the third oldest, was playing on some rocks when he slipped and cut his head badly. Keeper Dingwell rowed eighteen kilometres across Hecate Strait to the hospital at Port Simpson so Fred could be stitched up. Young Fred often searched for seagull eggs to supplement the family's food supply, and decades later, the thought of eating them was enough to make him shudder.

In 1919, the keeper at Green Island was supplied a hand foghorn to answer signals from nearby steamers seeking their way in thick weather. An acetylene gun, which was fired once a minute, replaced the hand foghorn in 1938, and the gun was in turn replaced by an even more powerful diaphone fog alarm in 1949.

One of the longest serving head keepers at Green Island was John Moran, who called the station home from 1919 to 1936. After an eventful and tragic day, Keeper Moran sat down on April 24, 1929 and, with deep regret, composed a report to his superior. Around noon that day, the Grier Starrett from Prince Rupert anchored northeast of the station, and Harold Dahl, the captain, and William Cummings, the engineer, rowed ashore. The pair enjoyed lunch at the lighthouse and then about three oclock they headed back to the Starrett, which had started to drift from its mooring.

When Keeper Moran met the men at the landing when they came ashore, he had commented on the seaworthiness of their dinghy, which was half-filled with water. The dinghy was left in the water while the men were on the island with the hope that its leaky seams would swell closed, but when the men prepared to leave, the vessel was full to the gunwhale. Keeper Moran offered his rowboat, but the men were convinced they could make it back to the Starrett in their own.

After emptying the dinghy, the men set off. By the time Keeper Moran closed up the boathouse and made his way back to the lighthouse, then men were halfway to the Starrett, but when he exited the lighthouse a few minutes later to check on their progress, he was horrified to see that the boat had overturned, spilling the men into the icy waters.

Keeper Moran raced to the landing, and within five minutes had set off in his rowboat. Before leaving shore, Moran noticed that one man had managed to pull himself onto the boat, while the other appeared to be treading water nearby. Sea conditions had gradually worsened during the day, and as he rowed, Keeper Moran was only able to catch glimpses of the men as he crested the waves. For some time before reaching the dinghy, Moran was only able to see one man. After pulling Cummings from the dinghy into his rowboat, Keeper Moran desperately rowed about, hoping to catch a glimpse of Dahl.

With the Starrett getting dangerously close to Gray Island and his own rowboat filling with water, Keeper Moran abandoned the search and headed for the Starrett. Cummings was revived enough to start the Starrett, allowing Moran to try to re-anchor the vessel so he could take Cummings ashore to get him into dry clothes, but after a futile attempt to find holding ground, Moran was forced to accept Cummings assurance that he could get back to port alone.

Keeper Moran concluded his report with the following paragraph:

May I be permitted to utter a word of vigorous protest against the practice of owners of fishing craft being permitted to leave port with unseaworthy dinghys and life-boats. The latter term is a farcical one in reference to some of the craft that have come ashore here from time to time. They are simply death-traps, and little safer, even in calm weather, than a basket would be.

Around 1957, a new concrete tower, flanked by two dwellings, was built to replace the original lighthouse.

In the spring of 1963, Keeper Milton John Wolksi and Assistant Dennis Patterson launched a small boat from Green Island for a beachcombing expedition. When just 500 feet from returning to the island, their outboard motor failed. The men frantically tried to row ashore, but a wind suddenly blew up, reaching speeds of 60 mph. While their horrified wives helplessly watched, the keepers were blown out to sea. Wolksi and Patterson could do nothing but pray as darkness fell and thirty-foot waves lashed their fourteen-foot boat. Luck was on their side this time, and their boat eventually beached itself a few miles from Ketchikan, Alaska.

Green Island Lighthouse has had a higher than average turnover rate for keepers, but there have been a few, like Keeper Moran, who fully embraced life on the remote islet. Another of this breed is Serge Pare, who as of 2013 had been on the island for eighteen years. In an email to journalist Eve Lazarus, Serge wrote, I am hoping that I will still be here until I am 70 years old or too old to live on an isolated place like here.

Green Island Lighthouse can be viewed from cruise ships or ferries bound to or from Ketchikan Alaska.