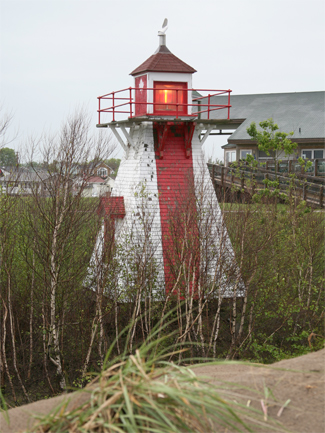 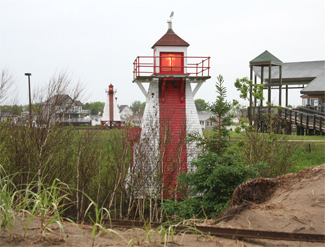 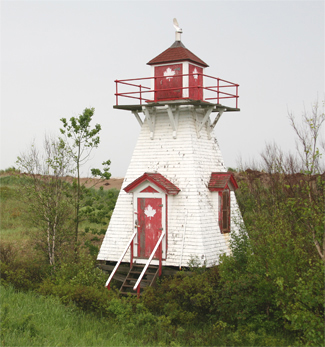 Although Shediac is known today as The Lobster Capital of the World, it has been home to many industries through the years that exploited the protected waters of Shediac Bay. New Brunswicks first sawmill was built in 1820 on the Scoudouc River, which empties into Shediac Bay, and two decades later fifteen mills were operating near Shediac and exporting several million feet of lumber to Europe each year. Ferry service connected Summerside and Charlottetown on Prince Edward Island to Shediac starting in 1858 and continuing until 1917, when the Cape Tormentine, N.B.  Borden, P.E.I. route opened. In 1937, Pan American Airlines began the first commercial flights between North America and Europe, using Shediac Bay as a refueling stop for its fleet of flying boats. This service, however, was short-lived due to the outbreak of World War II in 1939.

Shipping on Shediac Bay started from Queens Wharf at Shediac Cape, but most of it shifted to the wharf at Pointe-du-Chêne, which opened in 1857 as the northern terminus of the European and North American Railway that eventually offered service as far south as Saint John. Situated on the southeast side of the entrance to Shediac Bay, Pointe-du-Chêne was originally known as Oak Point, after the huge trees formerly found there, but due to the many places bearing that name, its French spelling was adopted.

A lantern on a pole was mounted on the Pointe-du-Chêne Wharf in 1860, and several additional navigational aids were added to Shediac Bay in subsequent years. A pair of range lights was established on Shediac Island in 1869 at a cost of $400 to direct ships into the entrance of Shediac Bay, which was bounded on the east by a bar extending from Pointe-du-Chêne and on the west by Shediac Island. The first Shediac Island Range Lights consisted of masts from the top of which lights were displayed. One of these masts was destroyed by lightning in 1893 and was replaced by a temporary mast. In 1895, two enclosed, square, wooden, pyramidal towers surmounted by square wooden lanterns were constructed to replace the masts. The front tower stood thirty-seven feet from its base to the vane on its lantern, and the back tower was fifteen feet taller. Neither of these towers survives today.

A set of range lights was erected on the Pointe-du-Chêne Wharf in 1875 to guide ships from the Shediac Island Range to the wharf. $3,000 had been appropriated for a lightship to mark this critical turning point, but it was found that range lights situated on the wharf could serve the purpose at a great savings to the Department of Marine.

In 1895 temporary range lights in the form of lanterns hoisted atop masts were established on the beach at Pointe-du-Chêne. The front mast stood 349 feet from the northernmost part of the point, was twenty feet high, and had a shed at its base painted white. The back mast was located 602 feet from the front one, was twenty-eight feet high, and also had a shed at its base. Both lights were fixed red and could be seen from a distance of seven miles. The lights were built on land owned by Jude Landry and Thaddy Gould, about a mile and a half from Pointe-du-Chêne Wharf.

In 1898, the mast lights that served as the Pointe-du-Chêne Range were replaced with a set of enclosed towers. Both of these structures are square, wooden towers, with sloping sides, surmounted by a square wooden lantern painted red. The front light measures twenty-one feet from its base to the ventilator on the lantern, while the back light measures thirty-nine feet. The towers were erected by day labour under the supervision of John Kelly, inspector of lights, cost $567, and commenced operation on December 5, 1898.

On October 1, 1899, a vessel, hired from the Charlottetown Steam Navigation Company at a cost of $5 per day, was moored in nineteen feet of water off Pointe-du-Chêne to serve as the Zephyr Rock Lightship. This schooner was painted blue with black bulwarks and displayed two white lights, one placed four feet above the other, between its two masts to warn vessels of dangerous Zephyr Rock. The lightship was only used during the dark nights of late autumn, typically from the first part of October until the close of navigation, to facilitate the entrance to Shediac of the mail steamer from Prince Edward Island. Records show that the lightship was used from 1899 to 1903.

In 2017, both the front and rear Pointe du Chene Range Lights appeared to be undergoing restoration and were missing their lantern rooms.

For a larger map of Pointe du Chene Range Front Lighthouse, click the lighthouse in the above map.