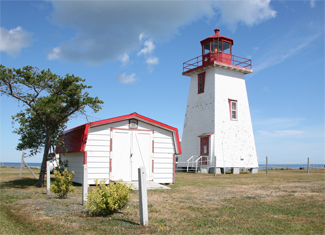 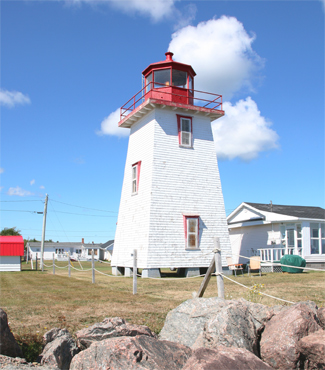 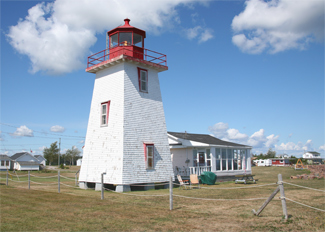 In his 1871 report to the Minister of Marine and Fisheries, John H. Harding, Marine Agent at Saint John, noted that several localities in New Brunswick needed navigational aids. One of these was Caissie Point (listed in early reports as Cassies Point), where a lighthouse was then under construction. Harding noted that a light on Caissie Point was of first importance to the large and extensive trade of the Strait of Northumberland and the Port of Shediac the present terminus of the European and North American Railway, and also the Port of call and discharge of the different steamers plying in the Gulf.

Pointe-du-Chêne Wharf on Shediac Bay opened as the northern terminus of the European and North American Railway in 1857, eventually connecting Shediac with Saint John. From Shediac, travelers could board ferries that serviced Summerside and Charlottetown on Prince Edward Island and Pictou in Nova Scotia.

The protected, fog-free waters of Shediac Bay were also ideal for the early transatlantic flying boats, and a newspaper headline on July 13, 1933, boldly declared, Shediac is destined to become the chief North American terminal for trans-Atlantic air traffic. It was on that date that twenty-four flying boats under the command of General Italo Balbo stopped at Shediac Bay en route from Rome to Chicago, where they were to attend the Century of Progress Exposition. This journey was the first massed transoceanic flight and was undertaken to celebrate the tenth anniversary of the formation of Mussolinis Fascist Party. Local fishermen refueled the planes, which came back twelve days later on their trip to Europe. The return trip was also historic as the flotilla carried the first airmail from Canada to Europe. In 1937, Pan American Airlines began the first commercial flights between North America and Europe, using Shediac Bay as a refueling stop, but the service abruptly ended with the start of World War II.

Three sets of range lights would eventually be constructed to guide traffic in Shediac Bay, but vessels would first use the more powerful Caissie Point Lighthouse to locate the entrance to the protected harbour. Caissie Point Light commenced operation on August 30th, 1872, exhibiting a flashing white light produced by two banks of lamps each of which was backed by an eighteen-inch reflector. The light completed a revolution every three minutes, thus producing a white flash every ninety seconds. Masters of steamers and other vessels trading to and from the railway terminus at Shediac highly praised the new light.

Charles P. LeBlanc was appointed the first keeper, with an annual salary of $240, and resided in the dwelling that was attached to the square, pyramidal tower. In 1875, it was noted that Keeper LeBlancs family consisted of himself, his wife, and two children. The following year, the family count had grown to five members, and it was noted that a fence was required to prevent cattle from interfering with the premises.

Keeper LeBlanc served at Caissie Point until 1901, a total of thirty-eight years. He was frequently praised in the annual inspection reports. Some of the references to him include: willing to carry out any instructions or advice given him in connection with his duties, faithfully attending to his duties, and obliging in every respect, and very attentive, and keeps the building in good order.

The station was supplied with a boat in 1878 and with a manual foghorn in 1900 that was to be used whenever the fog signals of vessels in the vicinity were heard.

For a larger map of Caissie Point Lighthouse, click the lighthouse in the above map.