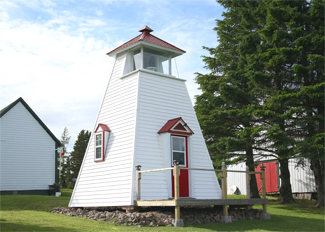 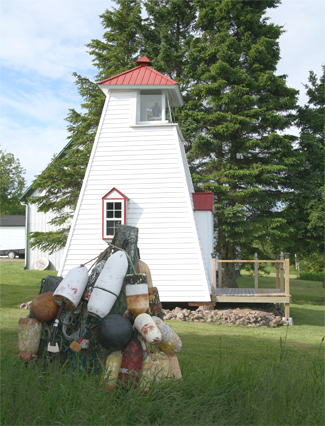 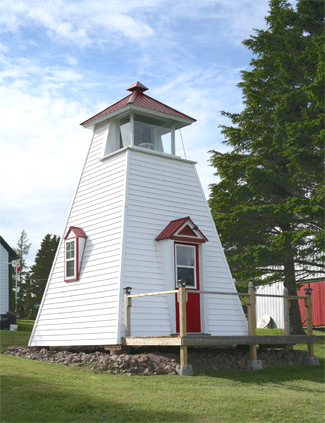 Rockport Peninsula divides the northern extreme of the Bay of Fundy, located between New Brunswick and Nova Scotia, into two branches. The western branch is Shepody Bay, and the eastern Cumberland Basin. A lighthouse was proposed for Cape Maranguin, the southern tip of the Rockport Peninsula, around 1850, but a light was placed on Grindstone Island instead. This aid to navigation assisted mariners sailing to and from Shepody Bay, but a light was still needed for Cumberland Basin. In 1889, tenders were invited for the erection of a beacon light on Wards Point, and George Ingram, of Newcastle, was awarded a $375 contract for its construction. The lighthouse, a square wooden building with sloping sides and measuring twenty-two feet from its base to the vane on top of its lantern, commenced operation at the opening of navigation in 1890 with Peter Hagen as its keeper. A small lens in the lantern room produced a fixed white light at a focal plane of seventy-two feet that could be seen from a distance of ten miles.

Peter Hagen, who received an annual salary of $80, was succeeded in 1896 by his wife, and then a year or so later, an E. Hagen was listed as the keeper. Edwin Lockhart took charge of the light in 1903 and served until 1927.

The lighthouse likely developed a leak as in 1897 flashings were inserted above the window and repairs were made around the eaves and door.

The Department of Marine decided that the tower would better suit mariners if it were relocated from Wards Point, which was south of Rockport, to Pecks Point, just north of Rockport. This move was carried out in 1908, and a one-inch diaphone fog alarm plant, purchased from the Canadian Fog Signal Company of Toronto for $998, was installed in a building erected by Amos Lawrence of Sackville for $419 to supplement the light. E. R. Reid of Welshpool built a wooden house for the fog alarm engineer at Pecks Point in 1909 for $1,940.

New three-horse-power engines were installed for the fog alarm in 1919, and duplicate fog alarm machinery was provided in 1931.

The lighthouse is currently owned by Ken Tower, whose father purchased and then relocated the tower and other station buildings over the winter ice from Pecks Point to their current location. Ken has installed vinyl siding on the tower in order to better maintain it and keeps it and the entire property in immaculate condition. The keeper's house is on the adjacent property and belongs to his sister with the old equipment shed sitting between the two properties.

For a larger map of Pecks Point Lighthouse, click the lighthouse in the above map.