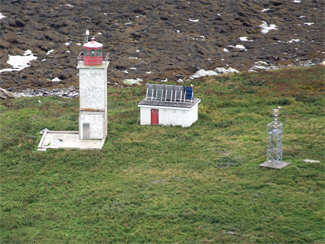 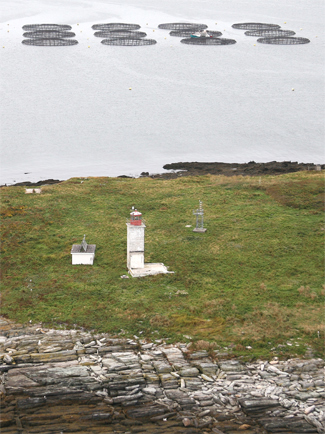 Great Duck Island is located 3.4 kilometres (2.1 miles) off the eastern shore of Grand Manan near Woodwards Cove and helps define the outer limits of the Grand Manan Archipelago. Companion Low Duck Island and High Duck Island lie just north of Great Duck Island, before Long Island. In the early 1880s, a petition signed by over two-thirds of the inhabitants of Grand Manan was sent to Ottawa calling for the establishment of a steam fog whistle on Great Duck Island. Parliament responded to the petition with an appropriation in 1884 for a fog alarm on the island that is also commonly known as Big Duck Island. Tenders were invited for the necessary buildings, and a $2,070 contract was awarded to G. S. Mayes. A T-shaped engine house with a pitched roof was erected at the southern end of the island to house the fog alarm equipment, and a small keepers dwelling and boathouse were built nearby. Samuel G. Dinsmore was appointed the first engineer or keeper, and the fog alarm was put into operation on October 1, 1886, sounding six-second blasts followed by thirty-five seconds of silence. The annual report of the Department of Marine for 1887 noted that the fog alarm was giving great satisfaction to the fishermen and vessels coasting around the south and east sides of the island.

It was noted in 1891 that the dwelling house at the station was altogether too small for the needs of the engineer and that additional accommodation for coal was also required. After plans and specifications for the necessary additions were prepared, tenders were invited. The bids received, however, were considered excessive so the work was instead carried out in 1892 under the supervision of David Ross, carpenter of the Dominion steamer Landsdowne. Keeper Dinsmore added a ten-foot-long and seven-foot-wide porch to the dwelling in 1894, and David Ross returned to the island that year to build two reservoirs for the steam engine and install a new coal derrick.

Due to acid in the water, the tubes in the fog alarms boiler used to heat the water to create high-pressure steam had to be replaced about every four months. A second boiler, made by Messrs. Carrier, Laine, & Co. at a cost of $1,386, joined the old boiler at the station in June of 1896. A two-story addition, containing five rooms, was attached to the keepers dwelling that same year at a cost of $400. A new steam boiler was substituted for the old one in 1905.

In 1915, the steam plant was converted to oil, and a Class B diaphone fog alarm installed under the direction of F. J. Lewis for $2,469. The station lost its boathouse to fire on February 25, 1926, and the keepers dwelling burned down on October 5, 1955, due to a defective chimney. Two replacement dwellings were soon added to the station, and in 1966 a combination lighthouse and fog alarm building was constructed on the island. This was the same year that similar structures were erected at Long Eddy Point on the northern end of Grand Manan Island and at Long Point on White Head Island.

The station was automated in 1984, and in 2008, the fog alarm building was demolished, leaving the square tower standing by itself. A skeletal tower was erected on the island in October 2015 to display a modern flashing light. As the lantern room atop the old tower obscured the new light in certain directions, the lantern room was removed and was helicoptered to Swallow Tail Peninsula on October 28, 2015. The lantern room from Great Duck Island can now be seen near Swallowtail Lighthouse, and in June 2017, it was equipped with a DCB-36 beacon believed to have been used on Machias Seal Island at some point.

Kelly Anne Loughery, founding president of the New Brunswick Lighthouse Society, had the opportunity to visit the island. "To date," she said, "this has been my most uninspiring, inhospitable lighthouse visit. The lighthouse is located on a flat barren island infested by muskrats. Every step is either in one of their holes or something even less appealing, and the inside of the lighthouse was laden with mold. I couldnt wait to leave. I cant imagine being a lightkeeper there."

For a larger map of Great Duck Island Lighthouse, click the lighthouse in the above map.

Great Duck Island Lighthouse is best seen from the water, but a distant view is possible from Grand Manan Island.